An interesting and healthy legal debate has arisen after my proposal, in view of a global pandemic, to include COVID-19 in the list of diseases covered by art 244A of the Criminal Code, which makes it unlawful to spread a number of diseases maliciously or negligently and makes the offence punishable with imprisonment.

The general public seems to be overwhelmingly in favour of such a measure, and some news portals last week reported that its introduction was imminent. Others reported that there were divergent views within the govermment about it. The fact the proposal is being considered is a very good sign.

Art 244A was enacted in 2002 and piloted in parliament by then-Home Affairs Minister Tonio Borg. This is therefore not about enacting a new law but just about including, at the stroke of a pen by means of legal notice, a new disease that has wreaked havoc around the globe within its purview.

Since the law has been in place for twenty years, those arguing against such a measure should be clear. Do they disagree with including COVID-19 under art 244A, or do they disagree with art 244A in its entirety and believe it should be repealed from the Criminal Code? Doing so would leave the malicious or negligent transmission of diseases completely unregulated.

Those who believe that offences under this law are difficult or almost impossible to prove are either saying the law should be repealed altogether, or that it should be strengthened. Either way, doing nothing is not an option.

But one must keep in mind that criminal offences can be proved in court not just by direct evidence, but also through circumstantial evidence. One must keep in mind recklessness is different from negligence. And one must not forget that an accused can be found guilty of the consummated offence but also of the attempted offence, which would be extremely easy to prove if a person knew he was infected and went around coughing in people's faces. So the level of difficulty in proving offences under this section are no different to those of all other offences under penal laws.

In reality, it is up to the courts, not legislators, to decide whether a particular level of proof has been reached. As the situation stands today, if a person boasts on social media that he has been diagnosed with the virus and has been going around trying to infect people, what can the police do without the relevant legal notice in place? Probably not much, notwithstanding a public admission of guilt. Is that a desirable situation? Isn’t that a grave lacuna in the law?

One could argue that the police could charge the person with grievous bodily harm (art 216 and 218) but then they’re back to square one. Why not have (if a legal notice is in place) and invoke the specific offence which is already on the statute book? Provisions relating to grievous bodily harm have been on the statute book for a long time, but despite this parliament deemed fit to introduce in 2002 the specific offence of spreading of particular diseases - art 244A. There must have been a reason!

Whilst one might argue there are quarantine rules in place, what about someone who goes around spreading the disease without breaching any quarantine rules? Is there no law sanctioning such deliberate or negligent behaviour at present? Art 244A in fact goes beyond quarantine rules - it complements them, and could be invoked even where no quarantine rule breaches have occurred.

Moreover, those who believe that this would open a floodgate of reports must also believe that there is widespread behaviour constituting a breach of this law, since at least some reports would be justified. That, in and of itself, would be sufficient reason to introduce the measure unless one wished these breaches to go unchecked if not unpunished! 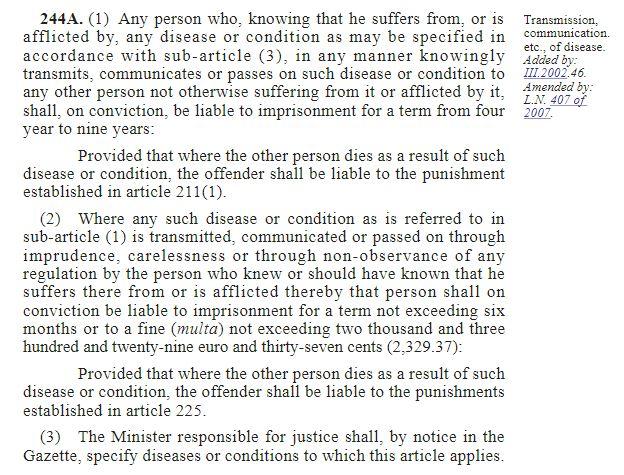 In reality, this floodgate of reports fantasy is a highly unlikely exaggeration, not only because filing a false report is a crime in itself but also because the police would, as always happens, only be investigating genuine cases and not frivolous ones.

One should also be again reminded that the primary aim of criminal law is deterrence, not retribution. The aim of such a measure would be first and foremost to deter and curb abuse in such difficult times, and not to have a multitude of prosecutions or convictions. The best deterrents lead to the least infringements and prosecutions. Indeed, let’s hope there would be absolutely no prosecutions should this law be amended.

Some may argue that adding this law would strain police resources. But I am aware that some high-ranking police officers agree with this proposal as an effective deterrent to protect them in the discharge of their duties!

As to the argument that such a measure would be driving infected persons into hiding, this doesn't make sense at all. Why on earth would someone who has no malicious intent refrain from being tested just because of this law?

This measure would also apply to people who had already tested positive. And a person who suspects he is infected would not risk going around without getting tested, since he could face the consequences – a maximum of six months imprisonment for negligent and nine years for the malicious spreading of the disease. The effect would be to get people out of hiding thus preventing further spreading, and not the other way round!

Only those in bad faith would refrain from testing because of this law, and these are precisely the people whom this law would target.

After all, the measure is intended to combat the spread of a disease which is leading to deaths around the globe and thus to have the least possible number of infections and fatalities. Deterrence, not retribution.

We must stand united as a nation in these difficult times. This healthy legal debate is intended to strengthen the fight against this pandemic with a united front as a united country, as such a measure would ensure that people who abide by the directions of health authorities will not end up being penalised by the negligent or malicious behaviour of a few.

Whilst being grateful to the health authorities for the excellent job they are doing in these difficult days, we look forward to better times ahead when all this will be over.

Franco Debono is a practising criminal lawyer and a former Nationalist Party MP.