Telescopes will be trained on Dwejra’s dark skies next weekend to expose the beauty of its celestial wonders and to highlight the threat of light pollution on one of the last remaining pristine spots for astronomical observations.

“The night sky of Dwejra is a gem we should make every effort to preserve, but I fear its days may be counted as increasing light pollution from nearby villages has been steadily encroaching upon it,” Joseph Caruana, an astrophysics researcher and lecturer, said.

Dwejra is one of the coastal sites listed as a dark-sky heritage but Dr Caruana feels the authorities are failing to protect its darkness.

Saturday’s astronomy night at the Dwejra Tower is aimed at raising awareness of the encroaching menace of light from boathouses and vending machines, among others.

“Dwejra is a place that deserves far more protection than it currently enjoys... Other countries all over the world are marketing some of their dark sites for astrotourism, a tourism niche Dwejra could sustainably benefit from if we care for it properly,” Dr Caruana said.

Dwejra, he added, was high on tourists’ places to visit because of the natural beauty it offered but unless the site was properly managed, its appeal would greatly diminish.

Organised by the university’s Institute of Space Sciences and Astronomy (ISSA), in a first collaboration with the Astronomical Society of Malta and Din l-Art Ħelwa, the event is planned as the first in a series aimed at injecting youngsters with the bug for sciences.

European Commission statistics show that just eight per cent of Maltese students undertook some form of postsecondary scientific studies in 2013, less than half the EU average, and Dr Caruana believes the way the subject is taught often lets youngsters down.

The night sky of Dwejra is a gem we should make every effort to preserve, but I fear its days may be counted

“The education system has a tendency to focus on fact assimilation rather than the development of reasoning and critical thinking, both of which are of paramount importance for a student of science.

“Over time, this dulls a young student’s mind and science ends up being viewed as a tedious and complicated topic rather than the vastly wonderful and truly exciting subject that it is,” Dr Caruana said.

The upcoming planetarium at Esplora is a first step in bringing children closer to the fascinating world of the night sky. An ideal follow-up would be a public observatory.

“Additionally, astronomy should play a much larger role in our education system as it’s a subject that, besides captivating the mind, really brings home scientific principles in an accessible fashion.” 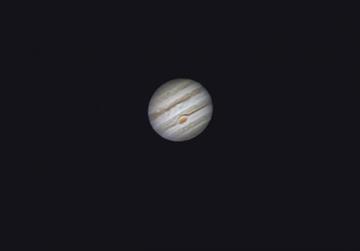 A view of Jupiter from a telescope. Photo: Josef Borg

Dr Caruana said there was also the misconception that students taking a degree in a ‘pure’ science subject, such as physics, lacked opportunities, when in truth physics students had a fantastic track record of getting well-paid jobs.

The astrophysicists and astronomers who will be on site at the Dwejra Tower will try to put this across on Saturday by sharing their knowledge and expertise.

The event, which will run from 8pm till midnight, will feature at least five different equipment set-ups, including one that will project live images of deep-space objects, such as galaxies, star clusters and nebulae (giant gas clouds that act as the nursery for young stars).

The telescopes will also focus on different celestial objects. For example, one will be trained on very distant deep-space objects and another on planets like Jupiter and Mars.

“We shall provide an overview of the night sky beforehand and hope to guide those present to a tour of the universe.”

For more information visit the Facebook page Astronomy Night at Dwejra, Gozo. Since space at the tower is limited, those wishing to attend are urged to register by going to the link on the page.