A letter found by the police during searches of murder suspect Yorgen Fenech’s Portomaso property implicates both the millionaire business magnate and the prime minister’s former chief of staff Keith Schembri in the assassination of Daphne Caruana Galizia.

Mr Theuma expressed his fears in the letter that the pair were planning to “get rid” of him.

In the note obtained by Times of Malta, Mr Theuma said the letter, together with recordings and a picture of him together with Mr Schembri inside Castille, had been compiled so the “full story” emerges if he was “eliminated”.

The letter is undated and the exact contents of the recordings it references are unknown.

Mr Theuma also claims in the letter that Mr Schembri gave him a government job, but he lost it once the chief of staff no longer had any use for him.

Times of Malta had reported how Mr Theuma drew up a will in December 2017, soon after George Degiorgio, his brother Alfred, and Vince Muscat were arrested and charged with carrying out the bomb plot.

Sources said Mr Theuma had admitted to writing the letter when interrogated by the police.

One source told Times of Malta that Mr Theuma told investigators he had named Mr Schembri in the letter to “scare” Yorgen Fenech. When pressed about Mr Schembri, Mr Theuma said he did not have first-hand knowledge that he was involved in the murder but named him “because he thought it was the case”.

The same source said Mr Theuma had not faced additional questioning by the police after Yorgen Fenech also started to implicate the prime minister’s chief of staff in the assassination.

It is understood Mr Fenech started to name Mr Schembri as a co-conspirator after the business magnate felt the chief of staff had gone back on his promise to obtain immunity from prosecution for him.

A letter detailing how to do this was allegedly passed on to Mr Fenech by the prime minister’s former chief of staff via an intermediary, doctor Adrian Vella.

Mr Schembri has denied trying to frame anyone. 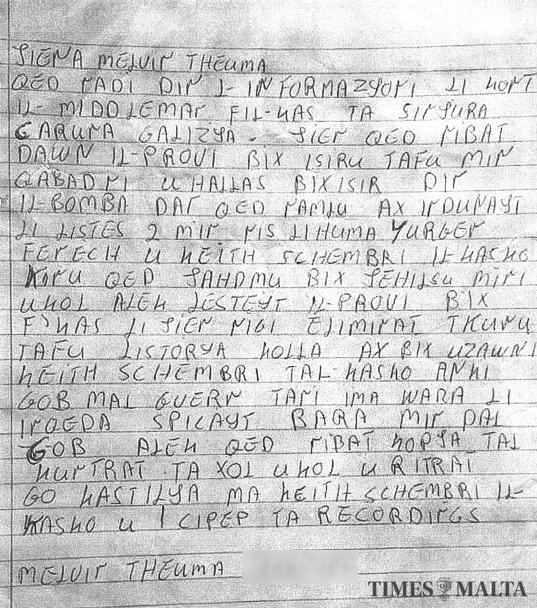 Theuma admitted to writing the letter when interrogated by the police

Both the police and Attorney General advised against the pardon, as much of what Mr Fenech claimed about Mr Schembri’s involvement had not been corroborated.

Mr Schembri resigned as the prime minister’s chief of staff last Tuesday, hours before he was called in for questioning by police in connection with the murder.

A source said Mr Schembri had not been on the investigators’ radar prior to the arrests of Mr Theuma and Mr Fenech.

The source said analysis of data gathered by Europol over the past weeks was still ongoing.

“This is a team effort. Europol, the police and the Attorney General’s office are all involved in this investigation, which is still on-going,” the source said.

The source did not rule out further action against Mr Schembri, who was released from arrest during last Thursday’s cabinet meeting. Mr Fenech’s lawyers did not respond to a request for comment.

Questions sent via e-mail to Mr Schembri, together with phone calls, remained unanswered.

I Melvin Theuma am providing this information that I was the middleman in the case concerning Ms Caruana Galizia. I am relaying this proof so that you will know who hired me and paid for the bomb. I am doing this because I realised that these two people, Yurgen Fenech and Keith Schembri il-Kasco, were working to get rid of me as well. So I prepared this proof so that if I am eliminated you will know the entire story. To use me, Keith Schembri il-Kasco even got me a job with the government but after he was served I ended up out of that job. I am therefore sending a copy of the job contract as well as a photo in Castille with Keith Schembri il-Kasco and chips with recordings. Melvin Theuma

In a statement, the Nationalist Party called for the immediate investigation of Mr Schembri.

It said that allegations linking Mr Schembri to the murder were not new and had also been made by Mr Fenech.

Such a situation placed the Prime Minister a hostage of criminality and made his position untenable. He should have never involved himself in investigations on people he protected for years and he should stop protecting Mr Schembri and allow justice to take its course without any interference.

The longer Dr Muscat stayed on, the worse the damage for the country, the PN insisted.