“A number of NGOs have filed a judicial protest against the minister of health and the parliamentary secretary for equality, calling for immediate decriminalisation and legalisation of abortion in Malta.

“Lawyer Lara Dimitrijevic explained that current legislation discriminated against people who can get pregnant and precluded them from making choices in their private lives. The law was also discriminatory on the basis of gender and constituted inhuman and degrading treatment of people, she argued” (June 16).

The protesters are campaigning for a change in the Maltese life-protection law to free mothers and medical doctors from their respective maternal and professional responsibilities and permit them to legally abort embryos. Such legislation would allow the killing of healthy, harmless, unique human beings, as if they were worthless inanimate garbage. 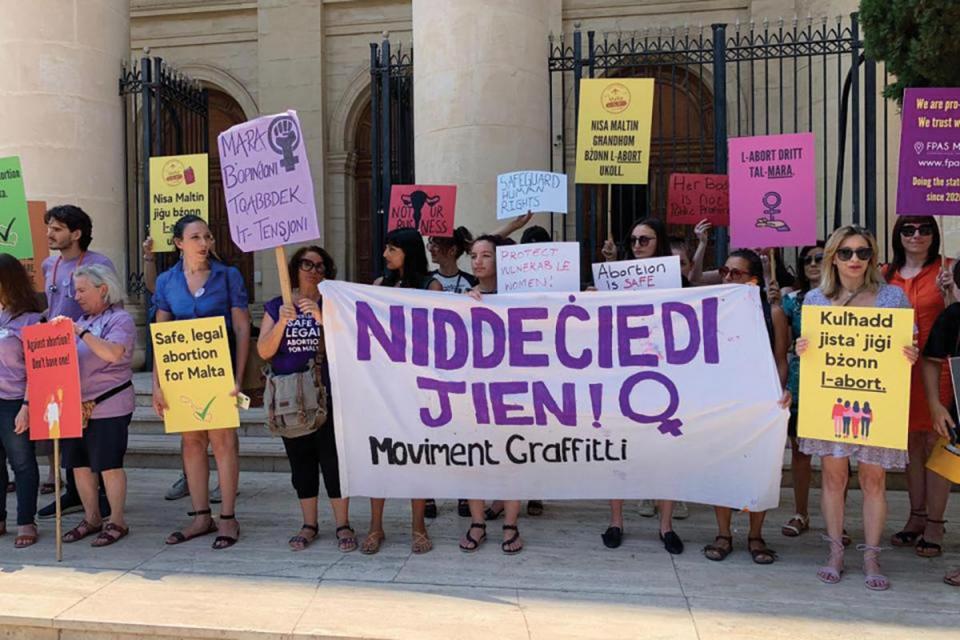 Activists protested outside the law courts, calling for the decriminalisation of abortion in Malta. Photo: Jessica Arena

It is legalised abortion, not our current law, that is inhuman and degrading for women.

Activists said that some women “needed” to terminate their pregnancy, that abortion was “a necessary health service” and that banning abortion does not stop it. It turns out, however, that an abortion is mostly wanted for sheer convenience or to hide a socially shameful act. It is pertinent to ask here if killing could ever be a “health service” and if abortion is really unstoppable. Obviously, if pregnancy is inconvenient or unwanted, a woman can easily avoid it by well-known simple choices and then abortion would not happen, either.

Andrea Dibben said: “This blatant violation of human rights (sic) by the state comes at the cost of women’s physical, mental and social ‘health’ as women continue to live in fear, stigma and shame in our socie­ty.” It is not true that abortion is a human right; it is simply inhuman and unethical.

The European Court of Human Rights and the Court of Justice of the European Union have consistently refused to recognise the existence of a “right” to abortion. The stigma and shame in our society are caused by feared exposure of irresponsible sexual activity out of wedlock and it is this activity that women can freely “choose” to control.

The government should not be pressured into allowing abortion to solve private problems arising from disordered sexual ethic. Laws allowing abortion have resulted in a huge unrelenting loss of precious human lives worldwide and they should be condemned and repealed, not emulated.

The overturning of the Roe vs Wade case (USA 1973), which created the “right” to abortion out of the dubious privacy excuse, is currently being considered by the US Supreme Court   and a favourable decision is being expected.

A few days ago, Transport Malta fixed a signboard on the Iklin-Naxxar road to impose a speed limit of 30 kilometres per hour on the uphill road. This makes no sense.

LESA wardens will be kept busy stopping fast drivers to give tickets and cause more traffic jams and confusion.