Part one of an article about two unpublished letters written by Nerik Mizzi while in Africa to the Governor of Malta.

Dom Mintoff may have excelled in many fields but his virtues hardly included praising others, least of all his political adversaries. Yet, something once made him break his quite habitual contrariness. 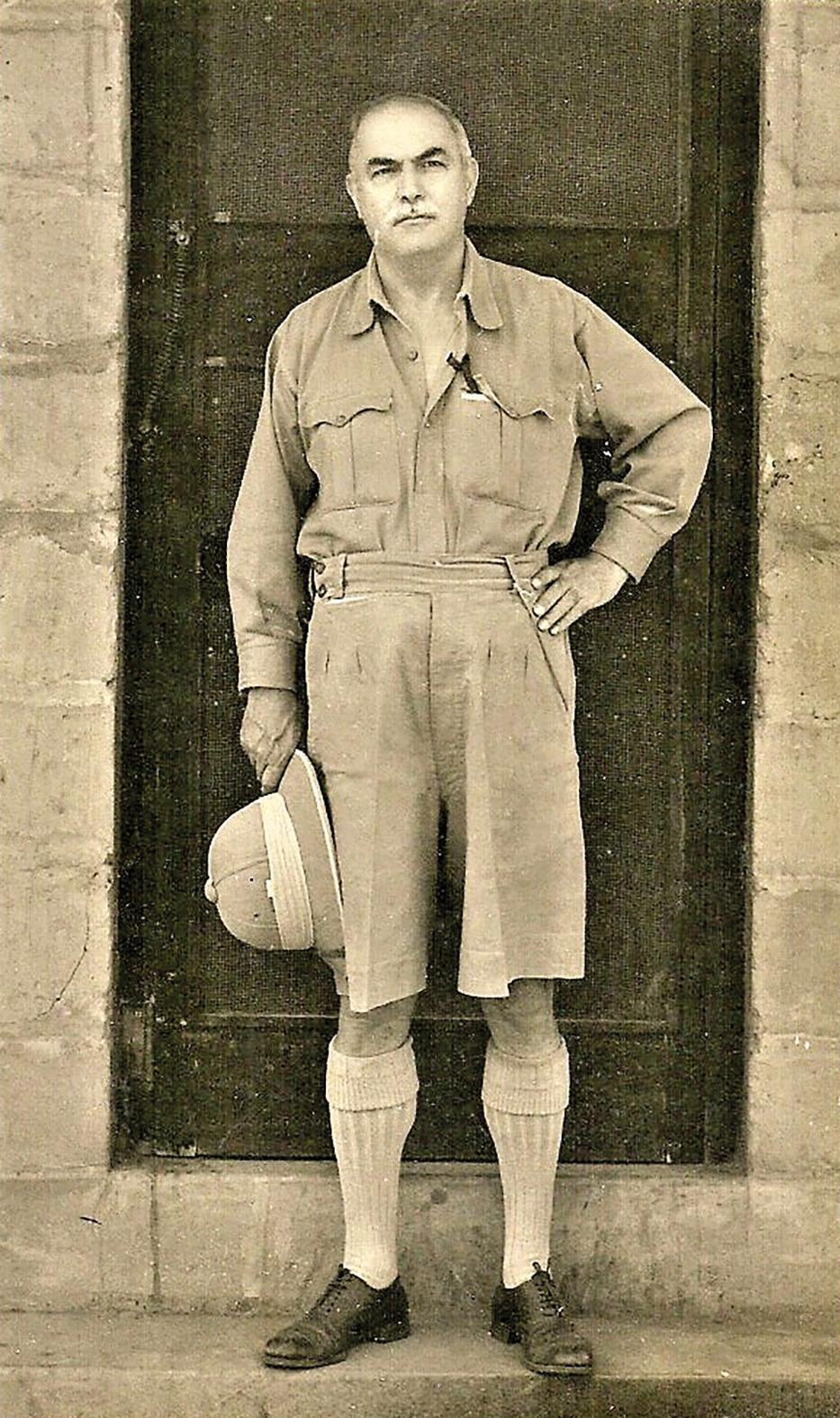 Enrico Mizzi in an internment camp in East Africa in World War II. Photo courtesy of the Fortunato and Enrico Mizzi Foundation

When Enrico Mizzi died in December 1950, he gushed in overwhelming tribute: “The greatest of all Maltese,” he warbled in Parliament.

Only the superlative would do for his lifetime opponent.

Mizzi faced, with truly heroic steadfastness, a whole life of persecution and punishment. He led the patriotic movement that opposed colonialism, serfdom and the empire, in a quest for self-determination.

The imperial authorities imprisoned him for sedition in World War I, suppressed his self-government constitution in the inter-war years, imprisoned him again and then exiled him to East African concentration camps without charge or trial at the outbreak of World War II, depriving him illegally and arbitrarily of his liberty for five years.

He died a pauper a few weeks after being sworn in as prime minister in 1950.

No reason given for imprisonment

When World War II became inevitable, the imperial authorities in Malta rounded up all those Maltese they believed, rightly or wrongly, could pose a security threat.

No reason was ever given for their imprisonment, nor were they ever charged with any offence.

In 1942, the detention authorities informed 41 of them that they would be deported to Africa. They challenged the exile order in the courts of Malta and His Majesty’s judges, in two separate judgments, certified their deportation unconstitutional and illegal. They were deported to African concentration camps all the same.

On Friday, February 13, 1942 (anyone superstitious?), they were put in the hold of the armed cargo liner Breconshire and ferried to Alexandria, to begin their long exile. The sea crossing proved adventurous and perilous.

At least four of the exiles later published full-length and highly colourful personal memoirs of their sea journey and their stays in African concentration camps.

Mizzi’s autobiography never saw the light. He is known to have kept a meticulous diary during his imprisonment and exile but his luggage was raided on his way back to Malta from Africa and his diaries seized by the British secret services. They have not been found since, though they might well turn up one day.

With the help of other researchers, I have traced two long letters written from Africa by Mizzi to the Governor of Malta, Sir William Dobbie, a blow-by-blow account of the exiles’ journey from Malta to Africa. Space does not permit me to publish them in their entirety, though they richly deserve to be. 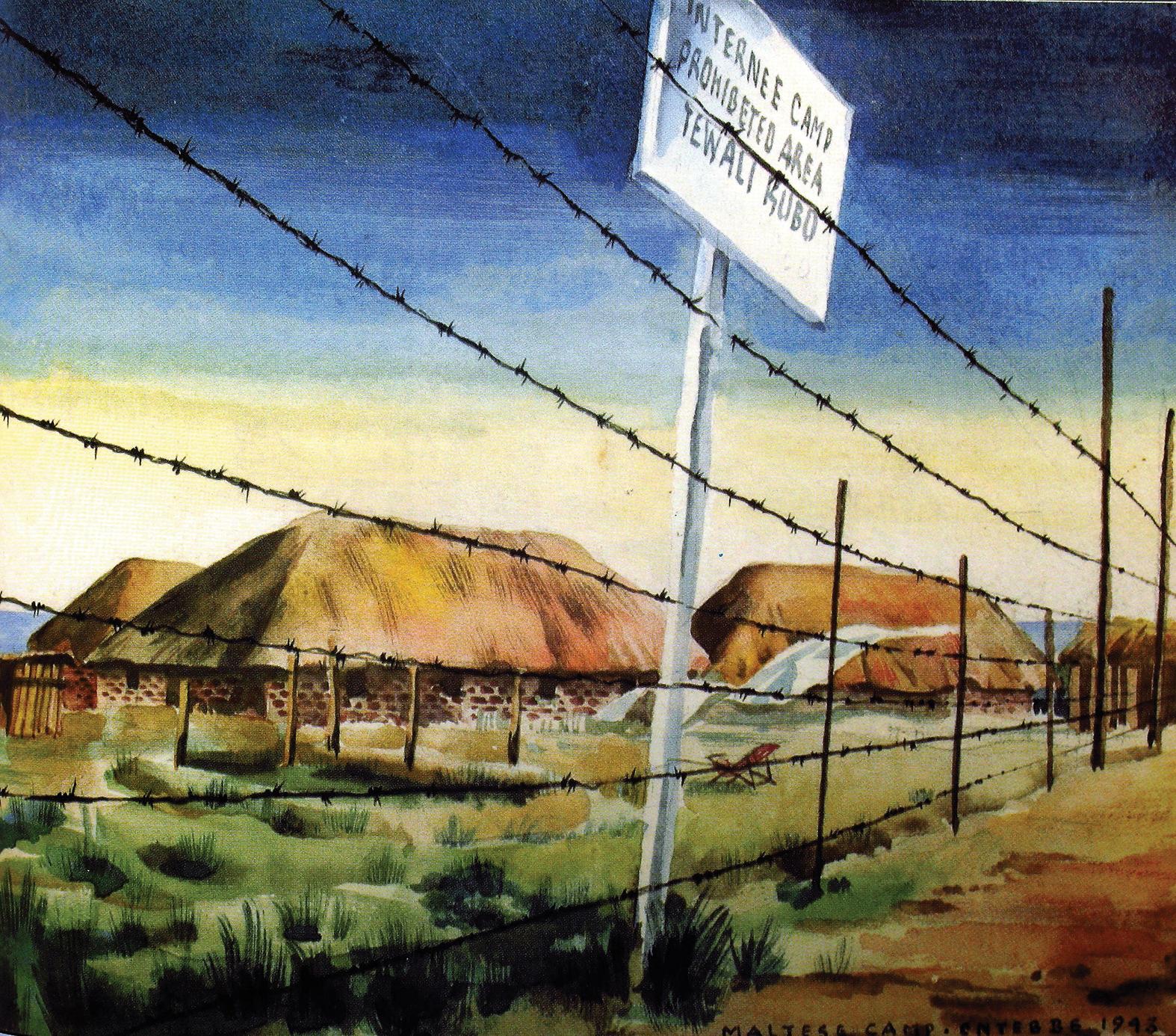 A watercolour painting of the compound in which the Maltese exiles were detained in Uganda. Author’s collection.

They profile Mizzi as a compulsive gentleman, unswerving in courage and dignity, a fanatic for fairness and stoicism even in the face of iniquity and crass injustice, burdened by the highest standards of integrity, never fawning, defiant in adversity.

For his own reasons, Mizzi from Africa wanted to keep the governor in Malta updated with all the salient events in the exiles’ journey, a narrative and a diary combined.

Letter from the Cairo citadel

His first letter, (almost five foolscap pages typed single spacing) was written in English from the Cairo citadel on March 2, 1942. It is not in the National Archives, so it may never have reached Malta.

But the Fortunato and Enrico Mizzi Foundation houses the handwritten original and a carbon copy. Mizzi insisted on only using Maltese and Italian to speak and write but his written English leaves little to be desired. 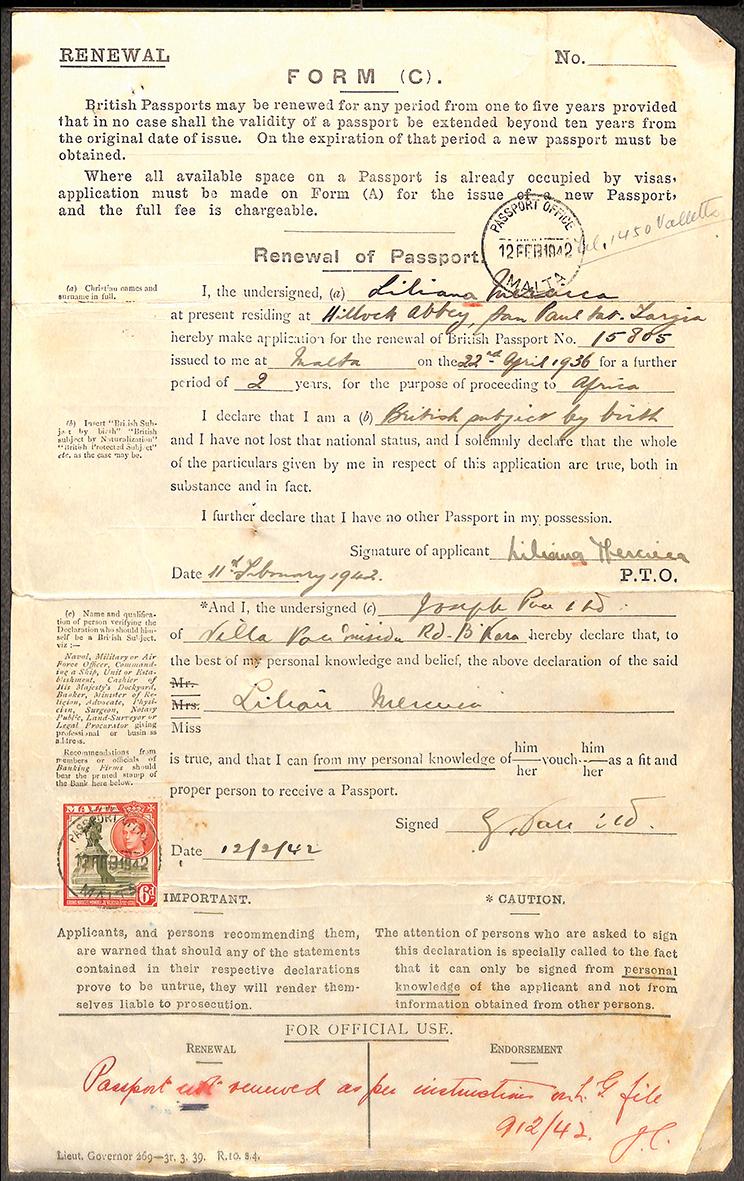 The application for a passport by Liliana Mercieca on the very day of her departure to Africa with her father, Sir Arturo Mercieca. Photo courtesy of the National Archives, Malta

Mizzi's letter starts by recording that it was not necessary for him to repeat the protests he had made against the deportation order as a representative of the Maltese people in the Council of Government and in court.

He just records that the order was given to the internees on the evening of February 12, 1942, and they were placed on the Breconshire the following afternoon. Their court appeal was still pending as they had contested the legality of the deportation order.

Many came to know of the day of the prisoners’ departure: their families and the inhabitants of Rabat where they were interned in St Agatha’s convent.

“Our adversaries… had ample time to organise against us a hostile demonstration but,  notwithstanding their efforts and the state of terrorism at present prevailing in the country, they have only succeeded in putting together, out of so many thousands of inhabitants, only a few scores of people, in the greater part women and children of the lowest social standing.

"The complete failure of the demonstration organised against the deportees confirmed the truth of what had been referred to us by those who visited us in the days preceding our departure, namely that the order of deportation had been disapproved by the great majority of the population. During the rest of the trip from Rabat to the Grand Harbour, there was no other hostile manifestation, not even by isolated individuals.”

On Parlatorio Wharf, while awaiting embarkation, “almost everybody present saluted us with sympathy”.

Mizzi adds that at about 5.15pm, they boarded the Breconshire (under Captain Colin A. Hutchinson RN) and were placed in the hold of the ship. There they met the former chief justice and Mgr Pantalleresco. They learnt that Lady Mercieca and their daughter, Liliana, had chosen to follow him into exile. That must have been a last-minute decision – Liliana Mercieca applied for a renewal of her passport the very day they left Malta! 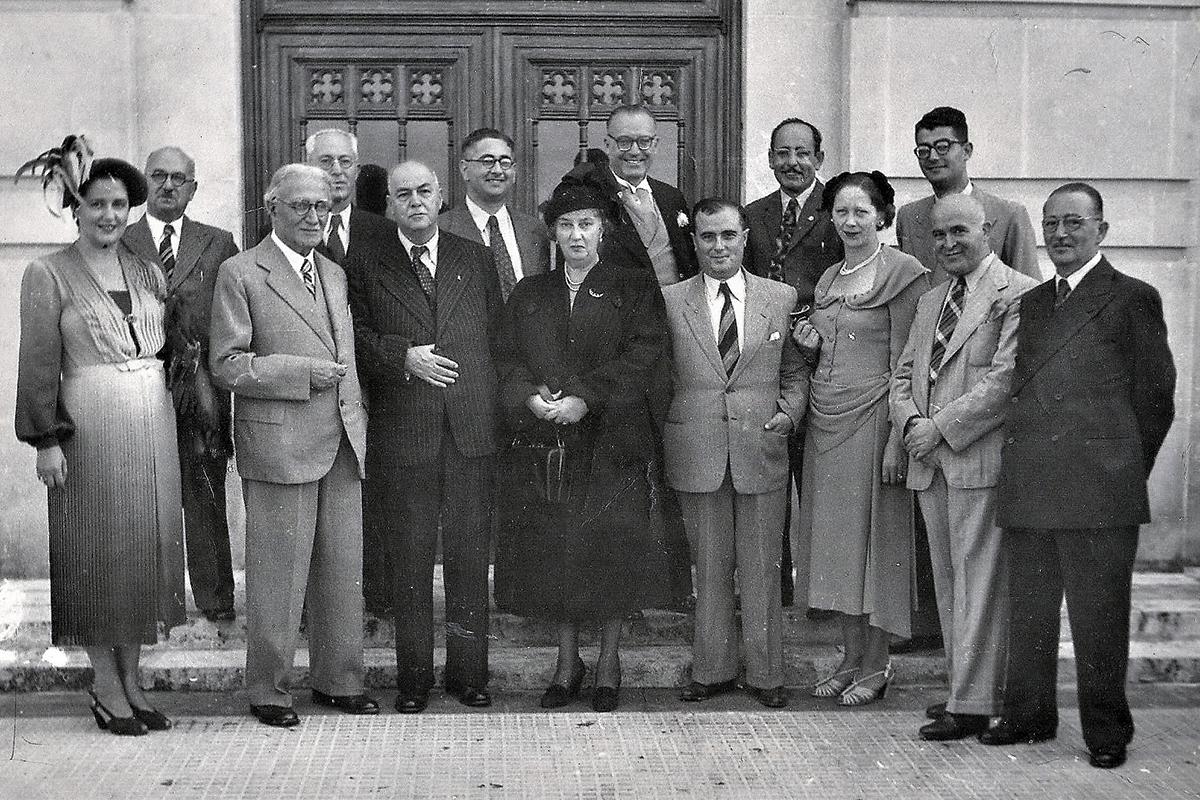 Some of the former exiles hosting Mizzi on his election as prime minister in 1950. The author’s father is in the front row, second from right. Photo courtesy of the Fortunato and Enrico Mizzi Foundation

The Breconshire, a large ship with a small crew and several cabins, “must necessarily have been available to lodge all 46 deportees.

I therefore fail to understand why, with the exception of Lady Mercieca and of her daughter, the deportees were all allocated to the ship’s hold and made to undergo a long and most dangerous voyage under such conditions of discomfort that would have been hardly endurable even for a Chinese coolie. Thanks God, all along the voyage the sea was calm”.

Mizzi had no complaints about the food onboard, “the rations were fairly agreeable and certainly showed an improvement, even as to the quantity, on those allowed at the Rabato Internment Camp”. Other memoirs add that the Maltese crew members of the Breconshire used to smuggle food and cigarettes to the deportees.

The author thanks Leonard Callus, Anthony Mifsud, Richard Muscat, the National Archives and the Fortunato and Enrico Mizzi Foundations for their unswerving assistance. 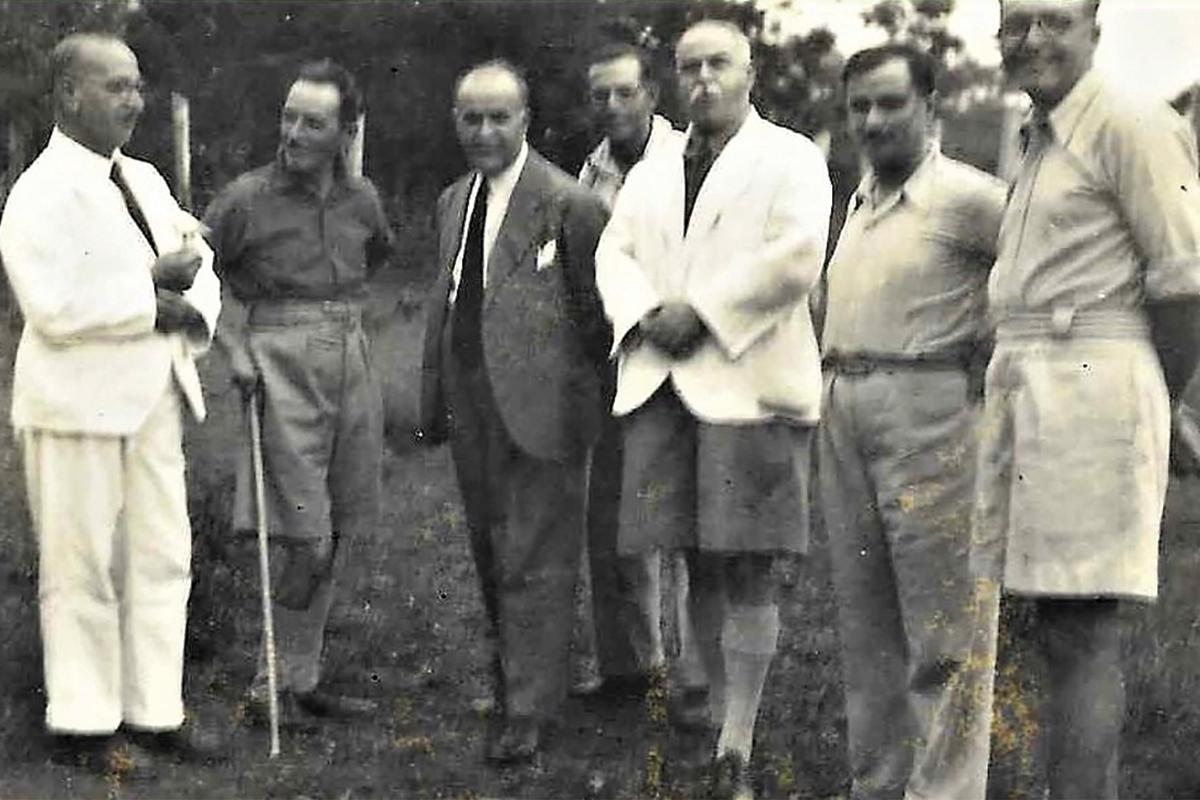 Enrico Mizzi (third from right) with the author’s father, Vincenzo (fifth from right), and other Maltese exiles. Photo courtesy of the Fortunato and Enrico Mizzi Foundation