It was reported that Joseph Muscat’s portrait was hung in Castille together with those of previous prime ministers, in a hush-hush way (August 12).

There must be a reason behind this low-key event. Muscat’s turbulent years in office shamed Malta. The rule of law was not functioning. Institutions failed to act. The corrupt felt free and safe. Muscat was named ‘Person of the Year’ for organised crime and corruption by a consortium of investigative journalists.

Muscat’s portrait had to be hung with the other former prime ministers as, whether we like it or not, he is part of Malta’s history, even though his premiership nearly made us ashamed of being called Maltese.

So much harm has been done to Malta’s reputation since 2013 that even genuine Labour supporters do not want to associate themselves with him any longer.

On the other hand, however, Prime Minister Robert Abela has failed to dissociate himself from Muscat.

Hopefully, Muscat will not be shameless enough to re-enter the political scene. Malta has certainly had enough of him.

Malta needs honest, hardworking politicians ready to serve and not be served. 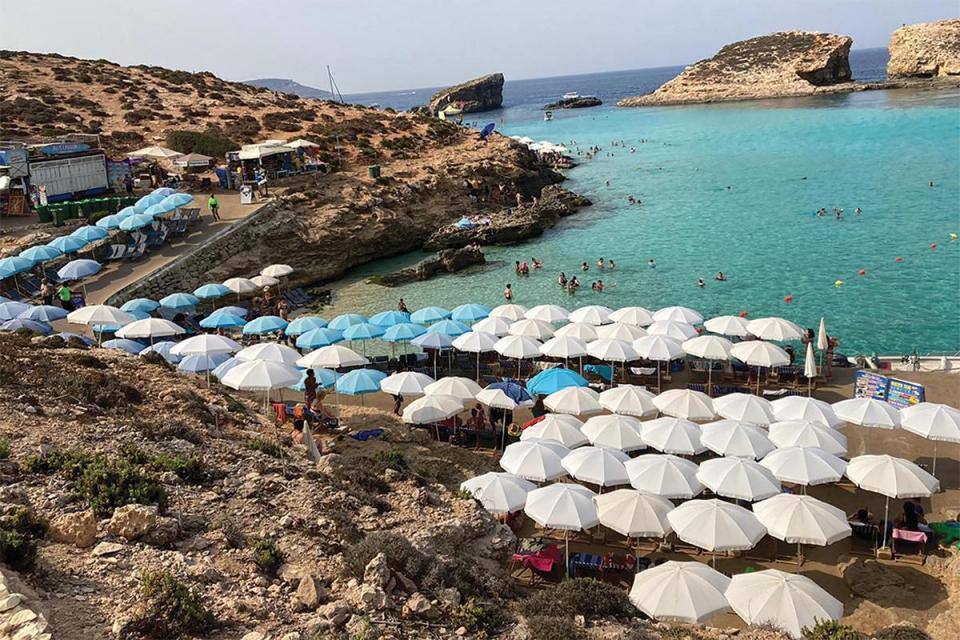 Umbrellas set up by operators in Comino hog the available space by the water’s edge. Photo: Karl Andrew Micallef

I refer to two items from timesofmalta.com (August 25), namely ‘Welcome to Comino, island of deckchairs and umbrellas’ and ‘Public land grabs: NGOs warn of growing free-for-all across Malta’s coast’.

In the years of visiting Comino and Blue Lagoon – only for an hour or so on each occasion – it has become more and more evident that the island is being over commercialised beyond belief. From the deckchairs and umbrellas right up to the jetty, to the numerous food wagons arranged up the path away from the jetty. The natural beauty shown in so many pictures and guidebooks is enticing – an island of peace and tranquillity – however, the reality is anything but.

In the item about ‘Public land grabs’ I noticed that the references were to resorts in the north of Malta. Could I suggest a reporter takes a trip to Pretty Bay, in Birżebbuġa, especially on a weekend. There, a large section of the beach has been taken over by sunbeds and umbrellas, all set up, waiting for customers, by very early morning. Even on weekdays, the beach is already a mass of these beds. When did so much of this public beach become privatised?

I first visited Malta almost 50 years ago and some 25 years ago Birżebbuġa became the place for me to stay. A lovely area, welcoming people, a nice beach and if you wanted to hire a sunbed one could be requested and it was brought to the beach.

One thing which struck me about so many of these bed hire locations around the islands is how they account for the tax they should be paying. They deal in cash and very rarely are receipts given – an island-wide culture, it seems.

For 30 years of my working life I was a travel agent and I got used down the years to hearing people say that they didn’t wish to return to this or that place as it had become too commercialised and lost some its charm. I wonder how many are also saying that about Malta. I hope not. You have too much to lose, so much that you need to preserve.

Ten years ago, when the Nationalist Party was in power, I, like many other homeowners, applied under a scheme to redeem our land lease. It had cost us quite a sum of money in architect’s fees and the application itself. Since then we have heard nothing from the authorities.

Every time I went to check about this I was always told that,  unfortunately, my file was at the bottom of the lot. Now this administration has introduced a new scheme but we still do not know where we stand.