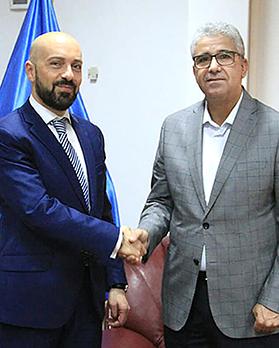 Mr Gafà, who, in the past, had been implicated in an alleged Libyan visa racket, hit the headlines last week after he was photographed holding what official communication from Tripoli indicated were diplomatic talks in Libya on behalf of the Maltese government.

According to the Libyan Interior Ministry and the Libyan Government communications office, Mr Gafà attended the meetings in his capacity as “special envoy of Prime Minister Joseph Muscat”.

Mr Gafà denied having led an official delegation to Libya, insisting he was there on a “personal visit” and that he had met with high-ranking members of the Libyan government because he knew them personally.

Despite this, a spokesman for the Office of the Prime Minister said Mr Gafà has been asked to explain his trip to the Libyan capital.

“Mr Gafà said he was on a personal trip, in his personal time, took time off work and paid for the trip himself. He was not representing the government at any point,” the spokesman said.

He added that Mr Gafà had never claimed to be representing the government or the Prime Minister during his trip.

Sections of the Libyan press yesterday reported that Mr Gafà had been forced to make last-minute alterations to his travel plans after he learned that airport security officers had been instructed to detain him.

Almarsad, the Libyan news observatory, referred to Mr Gafà as a “Maltese fraudster” and quoted unnamed government sources saying he had avoided detention thanks to a timely tip-off.

It also claimed that Mr Gafà had allegedly changed his travel arrangements at the eleventh hour and, instead, flew to Malta via Tunisia.

However, Mr Gafà insisted yesterday that at no point was he aware he would be arrested during his stay in Tripoli. Reports to the contrary, he added, were “all fake and instigated by a section of the Libyan media to damage my good reputation”.

He said he had not left Libya by car but flew to Tunisia from Mitiga airport in Tripoli on board a Libyan airline plane.

“All news stating otherwise is just fake news,” he said.

In 2016, Mr Gafà, then a Health Ministry official, had been accused by a whistleblower of having masterminded a medical visa racket charging Libyans thousands of euros to get into Malta. He had been investigated for allegedly charging Libyans a €2,500 monthly fee to secure medical visas, treatment and accommodation, along with an additional €100 charge.

Mr Gafà, a member of the Labour Party’s top executive, was removed from his office at the Health Ministry and sent to the Foundation for Medical Services pending the outcome of the investigation. When the police found no evidence of wrongdoing, he was moved to the Office of the Prime Minister, serving in the customer care unit.