The captain of the MV Lifeline has been fined €10,000 after a court found that the rescue vessel had not been properly registered when it entered Maltese waters after rescuing 200 migrants at sea last June.

While the charges could have carried a 12-month prison sentence, magistrate Joseph Mifsud said this was never contemplated as the court “immediately understood the circumstances of the case”. He said the captain had a clean criminal record and always showed respect to the court proceedings.

The fine will be distributed among Maltese organisations which help refugees and people living in poverty.

The court turned down a request by the authorities for the MV Lifeline to be confiscated, on the basis that the vessel was not the property of the accused.

A second charge, of using the vessel for commercial purposes without a licence, was also rejected.

Lawyer Cedric Mifsud told Times of Malta the defence team had requested a suspension of the judgment and would be appealing it, as they believed the captain to be innocent.

Read: 'Handing the migrants to the Libyans was not an option' - Captain

Captain Claus-Peter Reisch was at the helm of the Lifeline when it rescued 234 migrants in the Mediterranean last June, prompting an international dispute and days-long stand-off as countries squabbled over who would take the migrants in.

Malta eventually allowed the Lifeline access to its ports - following an ad-hoc agreement to distribute the migrants among several countries - but charged the captain with steering a vessel within Maltese territorial waters without the necessary registration and licence.

The vessel has been detained ever since, and the NGO Mission Lifeline has repeatedly complained about delays in the case.

The Lifeline is registered as a pleasure craft in the Netherlands, but Dutch authorities said this constituted only a certificate of ownership and did not grant the right to fly the Dutch flag. The defence argued that the certification indicated Holland as the vessel's flag state and therefore constitutes recognition by the Dutch authorities.

The court concluded that the registration "was not to the satisfaction of the Dutch authorities" when the vessel entered Maltese waters. 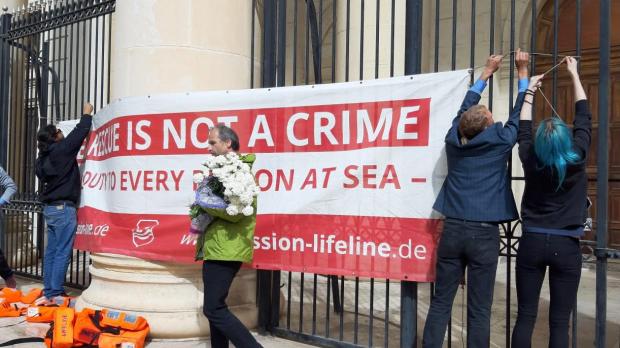 Activists demonstrate outside the courts in Valletta ahead of the hearing. Photo: Chris Sant Fournier.

Speaking outside court shortly after the decision, Mr Reisch said rescue operations would get under way in the coming weeks as the Lifeline team had already bought another vessel.

Mr Reisch said the Lifeline vessel would remain impounded by the authorities during the appeal period.

Brandishing a copy of the Lifeline’s registration documents, Mr Reisch said it clearly showed the vessel was correctly registered in the Netherlands.

He expressed his bewilderment about how the Dutch authorities had denied his vessel was correctly registered.

“It means that 25,000 other boats have the same problem as MV Lifeline. I just want to say to these people: check your registration. Maybe it is meaningless”.

Lawyer Neil Falzon welcomed comments by magistrate Joe Mifsud, who he said strongly reiterated that saving migrants’ lives out at sea was not a crime.

“We strongly feel this statement needs to be echoed loudly across the EU”, Dr Falzon said.

“Our biggest surprise in this case as we have been saying from the very beginning was the fact that the Dutch government changed its mind when it was faced with such a situation,” fellow lawyer Cedric Mifsud said.

He said “geo-political” considerations may have come into play when the Dutch authorities testified in court.

In a tweet confirming an appeal, NGO Mission Lifeline condemned the judgement as a "disastrous verdict that ignored evidence presented".

The NGO said in a statement: "Open source data from IOM’s Missing Migrants project estimates that over 1,500 people have lost their lives in the Mediterranean during our 322-day detention."

“As long as people continue to risk their lives, and drown, in pursuit of peace and safety, we will extend our hand in support.”

'Court shocked by racism and intolerance towards migrants'

In his judgment, the magistrate said he had been "shocked" by the comments he had seen on 'blogs' dealing with the case.

"The level of racism, intolerance and animosity towards fellow human beings who face much greater problems than we do is frightening," he said. "When reading such comments, this courts asks what has become of the values of hospitality and love to the afflicted that shaped this country."

The judgement acknowledged the captain's humanitarian act but said there was a "limit to how flexible the court could be" in applying the law.

The court also lamented the long delays in the case, which it said were largely due to the time taken by Dutch authorities to provide requested information. "In such cases of global interest, the process must take place quicker," it said. 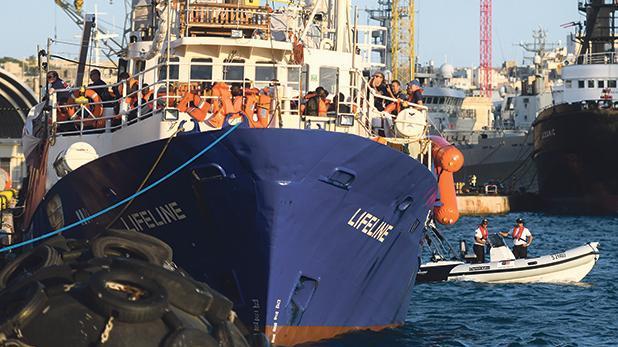