Lithuanians on Wednesday lit candles and laid flowers to mark 30 years since a deadly Soviet crackdown on the Baltic state’s independence drive, drawing parallels with the current situation in Belarus.

In socially distanced ceremonies, the EU state paid tribute to 14 unarmed civilians who died when Soviet tanks and troops attacked the Vilnius television tower in 1991 to take over a national broadcaster.

Thousands flocked to defend the parliament, which had declared independence in 1990, fearing another Soviet attack. Moscow’s forces retreated.

“It was the beginning of the fall of the USSR,” President Gitanas Nauseda said on Twitter.

Lithuania and fellow Baltic states Latvia and Estonia won international recognition later in 1991 after five decades of Soviet occupation, before joining the EU and NATO in 2004.

“The events of January 1991 played a decisive role in overcoming the division of our continent.”

Thirty years ago the suffering of Lithuanians was not in vain. Lithuania became a free country and is now free to help others. Last August, Belarusians began their struggle for freedom and we will not stop until it is achieved - opposition leader in exile Svetlana Tikhanovskaya

The poignant annual celebrations, that include burning bonfires throughout the night and concerts, were scaled back and most events were held online this year in the nation of 2.8 million people because of the pandemic.

Six Lithuanian Soviet-era officials were jailed in the 1990s for their role in the crackdown, but it was only in recent years that Lithuania held a trial against key suspects hiding in Russia and Belarus.

In 2019, a Vilnius court convicted a former Soviet defence minister and dozens of other Russian citizens in absentia of war crimes over their role, with the Court of Appeals currently reviewing the case. 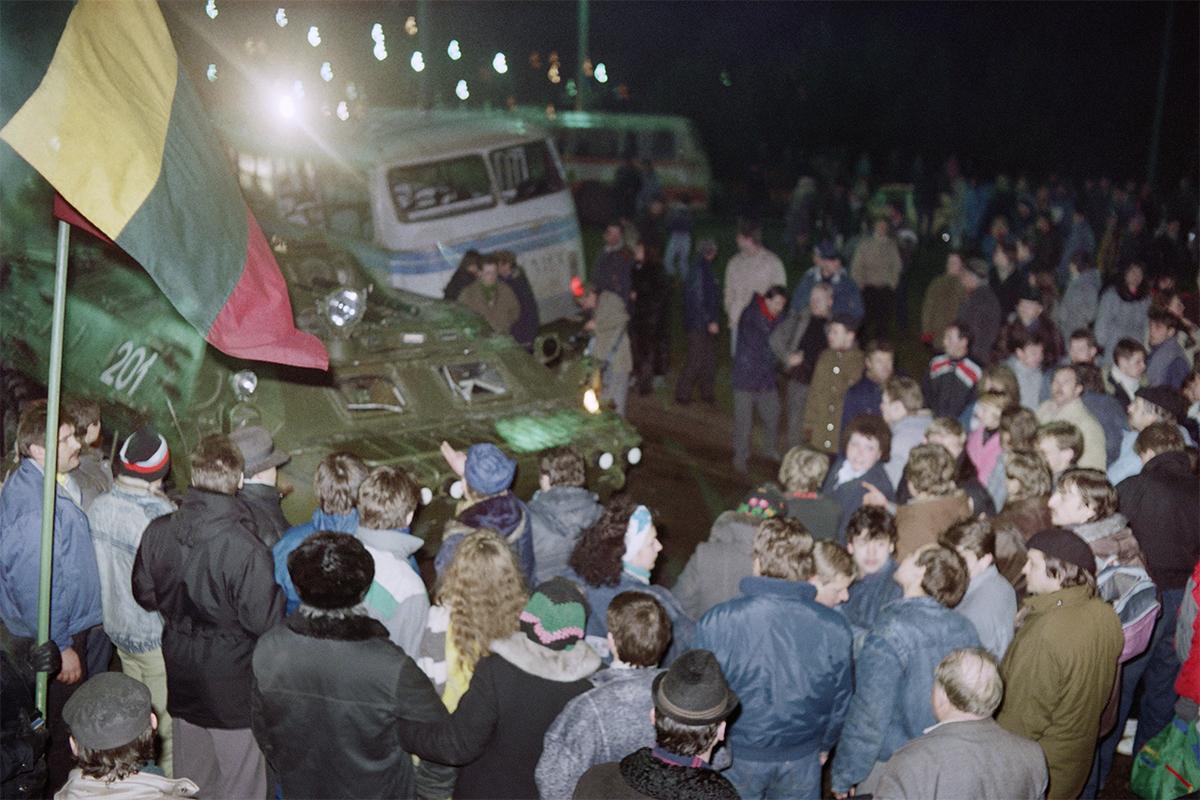 A Soviet tank rolling towards the Lithuanian Radio and Television station as Lithuanians attempt to block its advance. Photo: AFP

Lithuania’s Foreign Minister Gabrielius Landsbergis, the grandson of national freedom icon Vytautas Landsbergis who was in charge in 1991, called for international support against Russian “intimidation”.

“This is an external pressure on the Lithuanian judicial system, maybe seeking to intimidate judges through Interpol,” the minister told AFP.

Lithuanians have also used the anniversary to pay tribute to pro-democracy protests in Belarus.

Currently living in Vilnius, Tikhanovskaya compared the protests in her homeland to the Lithuanian independence struggle.

“Nowadays many Belarusians recognise in the events of January 13th their tragic present,” she said.

Tikhanovskaya, who was a candidate in the Belarusian presidential election in August, is among more than 350 opposition activists who have found shelter in Lithuania since the disputed vote.

Tikhanovskaya thanked Lithuania for its support for the protests against authoritarian President Alexander Lukashenko, calling it a symbol of a “true fraternity”.

“Thirty years ago the suffering of Lithuanians was not in vain. Lithuania became a free country and is now free to help others. Last August, Belarusians began their struggle for freedom and we will not stop until it is achieved,” she said.