Former financial regulator Joseph Cuschieri has defended a free trip to Las Vegas bankrolled by Yorgen Fenech, telling a public inquiry that he saw no conflict of interest at the time.

Cuschieri resigned as CEO of the Malta Financial Services Authority on Wednesday - a month after Times of Malta revealed the 2018 Vegas trip with casino magnate Fenech, who is accused of conspiring to murder journalist Daphne Caruana Galizia.

The trip took place just weeks after Cuschieri had quit his job as lead regulator of the Malta Gaming Authority, a post in which he was responsible for overseeing Fenech's casino business interests.

"At the time, I didn’t see any conflict of interest," he told the inquiry into Caruana Galizia's assassination on Friday.  "In hindsight, had I the gift of foresight, I would answer differently."

He said he had no idea Fenech, who he described as a friend, owned secret company 17 Black or was a person of interest in the murder inquiry at the time of the trip.

Asked about his decision to resign, Cuschieri said the issue had caused "great stress" to his family and "negatively impacting" the authority.

"I decided to go back to the private sector to avoid negative attention on the MFSA," he said and that the decision was his alone, not prompted by the prime minister.

His hour-long testimony was part of a session that began with former minister Konrad Mizzi refusing to answer lawyers' questions.

That’s all for today

1.04pm After a relatively brief testimony, that's all from the former MFSA chief. We will be back on Monday at 1pm where Db group chairman Silvio Debono is due to testify.

We'll have a brief summary of Cuschieri's testimony above in a few moments. 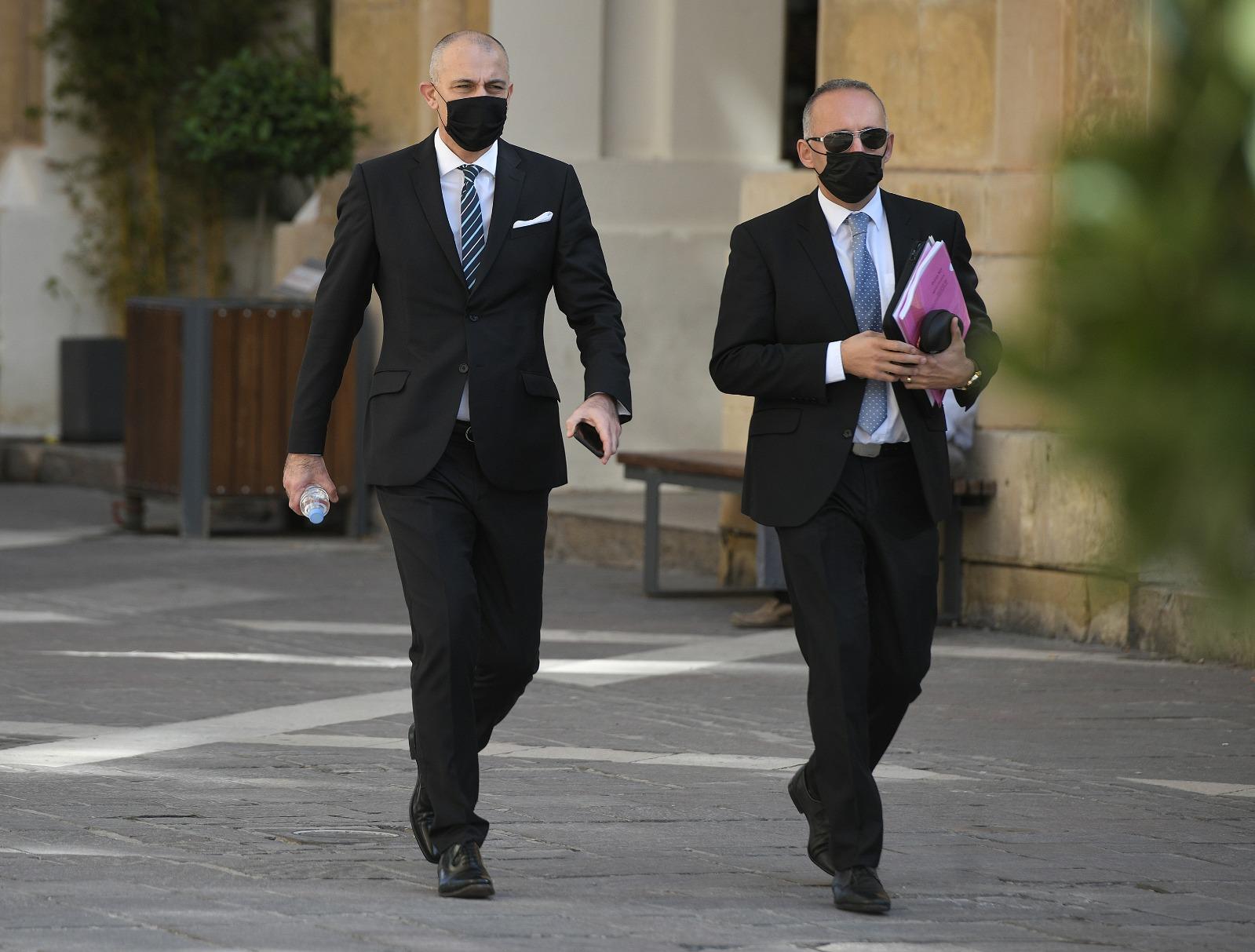 "How could you remain friends with someone involved in such matters?" he is asked.

Lawyer Pawlu Lia’s voice suddenly shouts out: “Why are you asking him this question? Why must the witness explain for others? This is all for the media,” the lawyer shouts.

"I had no idea that these persons were involved in such matters," Cuschieri says.

"Exactly, yes," Cuschieri agrees. He refers to Pilatus bank and kickstarting the procedure to withdraw its licence.

"We had to get go-ahead from a foreign entity."

12.55pm Was there ever any interference in your work at MGA? Gouder asks his client.

"No, never. My actions might not always have gone down well with public servants. But we cleaned up the sector, and made it low risk. I always found the support of the finance minister to beef up resources."

What contact did you have with international stakeholders? Gouder asks.

"That’s somewhat different. We had good relationships with European Central Bank, EBA, and other regulators. IMF’s last report regarding Malta had positive comments. We managed to transform the image of the authority."

12.51pm Cuschieri says he went twice to Fenech's farmhouse. Asked if any politically exposed persons were present, he replies, no.

Was it you who chose to resign or the prime minister? Azzopardi asks. "I did", he replies.

What about Edwina Licari?

12.46pm Asked about the group who travelled to Las Vegas, Cuschieri says Licari was employed by the MGA at the time. He had met her there in 2013.

Did she retain a position at the MGA or did she move to MFSA?

"She resigned... and took a short break. We then issued a call for applications and I urged her to apply. There weren’t many applicants. She underwent an interview and she was taken on board as general counsel," he explains.

So as MGA official she was invited by Yorgen Fenech? "Yes, exactly."

Probed more on his relationship with Fenech, Cuschieri says that "the relationship developed into friendship".

'I didn't see any conflict of interest'

12.42pm Did you check if Yorgen Fenech was a subject person before the Las Vegas trip? Comodini Cachia asks.

"I did not know about that," Cuschieri replies.

"You said that you introduced many stringent measures but then as head of authority you went with your own ex-license holder to issue certification in his favour?" she questions.

"At the time, I didn’t see any conflict of interest. In hindsight, had I gift of foresight, I would answer differently."

"I believe 17 Black came after, in the media," he responds.

12.39pm Cuschieri insists that he resigned irrespective of the outcome of the MFSA inquiry.

Therese Comodini Cachia, lawyer for the Caruana Galizia family, points out that his resignation and the statement by the authority were published within 24 hours.

Lawyer Gouder jumps up, accusing Comodini Cachia of trying to mislead the witness and pointing out no conclusions of the inquiry were published.

12.36pm After the Vegas trip was made public, Cuschieri self-suspended and then resigned a month later. He explains why.

He said the case had caused "great stress" to his family.

"I self suspended for a month or so. I ended up with a lot of time on my hands at home and had time to reflect. It was negatively impacting the authority too. So I decided to go back to the private sector to avoid negative attention on the MFSA," he says.

12.34pm Cuschieri is asked about companies revealed in the Panama Papers. Did he come across any files on them?

"As far as I know we weren’t involved in those."

12.32pm Cuschieri says that when he joined the MFSA, action had been taken on defunct bank Pilatus and Satabank.

"We got two atrocious reports and we set out, addressing the recommendations made therein. We had to beef up capacity. We were often criticised about that lack."

He said they had to invest in technology and beef up surveillance regarding money laundering.

12.25pm Returning to that Vegas trip, Cuschieri is asked if he kept in touch with Yorgen Fenech afterwards. "No. I had since joined MFSA and had no time for anything, over and above work."

Asked if he was alone, he says he with "the lawyer", a reference to Edwina Licari, who also accompanied him. "And what about Charlene Bianco?", the judges ask, referring to the fourth person on the trip, the former personal assistant to OPM chief of staff Keith Schembri. "She was not a secretary?", the board asks.

Cuschieri says he cannot really answer that. "I don’t know. It was a long haul trip. We had meetings. I gave my input explaining the system in Malta." He said Edwina Licari was the expert on the subject. She was technical expert, counsel.

"But Charlene?", the board persists.

"No, she gave no advice"

12.22pm Cuschieri is asked about his relationship with the Labour administration under Joseph Muscat. They met when he became an MEP and Cuschieri was working with a local telecommunications company. Muscat consulted him about a directive on roaming fees.

He met Keith Schembri when he went to give his input into policy. "I wasn’t really active in campaigning," he says.

12.17pm The inquiry board asks Cuschieri about his trip to Vegas with Yorgen Fenech, who is alleged to have conspired to murder Daphne Caruana Galizia in 2017.

He explains they met in 2014 for the first time. Fenech, a casino owner, had asked to meet him as the new regulator in the sector. It was usual for him to meet players in the gaming industry, he explains.

They enjoyed a "working relationship and later got to know each other better."

When he left the MGA in 2018, Fenech approached him about a meeting with big operator in Las Vegas to carry out some reforms. "He asked me to go with him, to explain the Maltese eco system and the relative regime. I accepted to go. That was May 2018."

He said he had "no idea" Fenech was a person of interest in the Caruana Galizia murder at the time.

12.15pm  He describes "challenging years" working in the gaming sector, which he is now much "safer" than it was before.

"We sometimes took decisions as a result of which I feared for my own safety. Action against Italian, Sicilian companies."

12.08pm After confirming to the board that he is not under any magisterial or police investigation, Cuschieri begins by giving a brief run down of his career.

He graduated 25 years ago as an accountant and has been involved in public entities for the last seven years.

In 2013 he was chairman at the Malta Gaming Authority and later CEO at MFSA. He was a director at Projects Malta and Eco-Contributions appeals board.

12.04pm Joe Cuschieri arrives with his lawyer Charlon Gouder. He takes the oath.