A straightforward purchase of printing machinery became a convoluted process to cover up backhanders, a police inspector said on Thursday, shortly before Adrian Hillman was put under a bill of indictment.

The compilation of evidence against Hillman started on Thursday, with the former Allied Newspapers managing director facing accusations of financial crimes.

Hillman was charged last Saturday after being extradited from the UK on Friday.
He is being accused of money laundering, conspiracy to commit a crime, defrauding Progress Press, making fraudulent gain, making a false declaration to a public authority, as well as accepting bribes.

Testifying in the compilation of evidence against Hillman, Inspector Joseph Xerri said that he and former Progress Press chairman Vincent Buhagiar, who is facing similar but separate proceedings, conspired to defraud the company that employed them.

He said the inflated price for printing machines purchased through Keith Schembri’s Kasco Ltd left Kasco with a profit that was shared between Buhagiar, Hillman, Schembri and Kasco employee Malcolm Scerri.

“In the opinion of the forensic auditors appointed by the magistrate presiding over the inquiry, the commissions paid were disguised bribery payments, sometimes listed as 'consultancy fees' to cover the fact that these were bribes,” the inspector testified.

The case revolves around allegations that Schembri paid Hillman up to €650,000 during that same period through offshore accounts. But in the opinion of these forensic auditors, Hillman received in excess of €1 million in backhanders.

Xerri explained how the police investigations began following the conclusion of a magisterial inquiry conducted by magistrate Josette Demicoli.

The issue dates back to 2013, when Progress Press had applied for, and later received, some €1.5 million in aid from Malta Enterprise to help partially cover some €5.5 million worth of investment in a new printing set-up.

Progress Press is a subsidiary of Allied Newspapers, which is the publisher of Times of Malta.

He explained that while the financial aid was only meant to cover capital investments on fixed assets, the company had included unspecified amounts of “consumables” in their application.

These consumables were later included in receipts submitted for fixed investments in machinery, he said.

He confirmed under cross examination that Malta Enterprise had not filed any report alleging that it had been defrauded by Progress Press. He said the police had questioned Chief Officer at Malta Enterprise, George Francalanza, who confirmed that he saw no fraud by Progress Press in an application that led to money laundering charges against the company.

Xerri said a spreadsheet had been found on the servers of the Kasco Group detailing how the money would be split between the beneficiaries. According to a blueprint, Hillman, Noel Galea from Progress Press, and Kasco’s Simon Poulton and Malcolm Scerri had to receive funds from the sale of a particular machine to Progress.

When questioned by the police, Galea denied ever receiving any commissions as part of the deal, Xerri said.

The inspector said an analysis of Hillman’s account with MFSP, which later was renamed Zenith, only received funds from Schembri and his offshore companies.

During cross-examination, the inspector was asked whether he was aware that the decision to buy the printing machines was taken by the Progress Press board of directors and not by Hillman alone. The inspector confirmed but added that the “process was vitiated”.

The inspector said that Nexia BT’s Brian Tonna and Karl Cini had fabricated documents to justify certain payments, some of them backdated, with the magisterial inquiry describing them as “professional money launderers”.

He confirmed that the court experts appointed by the inquiring magistrate did not speak to Hillman and reached their conclusions on their accord. He said the experts said there were a number of transactions that seemed to be the result of the blueprint but there were other payments they could not explain.

That is why the inquiry ordered the police to investigate further, the inspector said.

He said that when questioned by the police, former Progress Press financial controller, Claude Licari, said he had informally raised the issue about the inclusion of consumables in the Malta Enterprise application, adding that he did not mention it again when auditors PWC were appointed to check the issue and they found nothing wrong.

At the end of the sitting, presiding magistrate Donatella Frendo Dimech found that enough evidence had been presented for the criminal case against Hillman to continue.

The case continues on July 15.

2.20pm Hillman is placed under a bill of indictment.

The next sitting will be held on July 15.

We'll be back with a recap shortly.

ME filed no fraud report

He says the court experts appointed by the inquiring magistrate did not speak to Hillman.

The experts said there were a number of transactions which seemed to be the result of the blueprint but there were other payments they could not explain. That is why the inquiry ordered the police to investigate further.

The inspector replies that Hillman received more funds than those listed in the blueprint.

Filletti: "Did Malta Enterprise file a police report on fraud?"

2.05pm When asked about the initials on the blueprint, Noel Galea denied receiving any commissions.

Former financial controller Claude Licari said he had informally raised the issue about the inclusion of consumables. PWC were appointed to check the issue and they found nothing wrong.

Meanwhile, an international arrest warrant was issued for Hillman and started process to extradite him to Malta but it was stalled due to bureaucracy.

Hillman consented to being brought to Malta.

Upon his return, he released a statement to the police but refused to answer any questions, except the general ones.

Recommendation to ME to accept application

1.40pm Police spoke to officials at Malta Enterprise regarding the grant application process.

The grant covered only capital expenditure and 'consumables' were not meant to be included in the grant.

George Francalanza, chief officer at Malta Enterprise, said he ignored consumables because he considered them as peripheral. He said he issued a recommendation to the ME board to accept the application.

Police also spoke to engineers who carried out the site inspection at Progress Press. There were small variances in the three machines but these were not drastic changes that required further action.

The Progress Press board heard a presentation by engineer Noel Galea, comparing the different machines that could be bought. The board concluded that the HP 76 machines was 20 per cent cheaper than the HP 56.

The company paid for machines, including clicks and service agreement covering a five-year period.

Four had to receive funds

1.35pm In August 2016, Progress Press sent a letter to Malta Enterprise informing them about the purchase of a different machine to that which had been approved. Malta Enterprise accepted the change and reduced the amount of the grant.

The term 'consumables' was never mentioned.

Meanwhile, Hillman had to be paid €151,250 in commissions over this machine.

1.30pm The inspector says Hillman was a consultant for Keith Schembri, including on the film Agora which was shot in Malta.

Xerri then goes on to say the police investigated the Progress Press digital project over the purchase of the last machine.

Progress Press was due to invest €5 million and made a request to convert €12 million in tax credits into cash.

Malta Enterprise recommended that the request for conversion of tax credits be refused. But it accepted a request for investment aid to the tune of €1.6 million.

The offshore structures were created by Karl Cini and Brian Tonna from Nexia BT. Experts concluded that Tonna and Cini were professional money launderers, he says.

The commissions, which totalled €5.5 million, were used as a term to cover up for corruption. 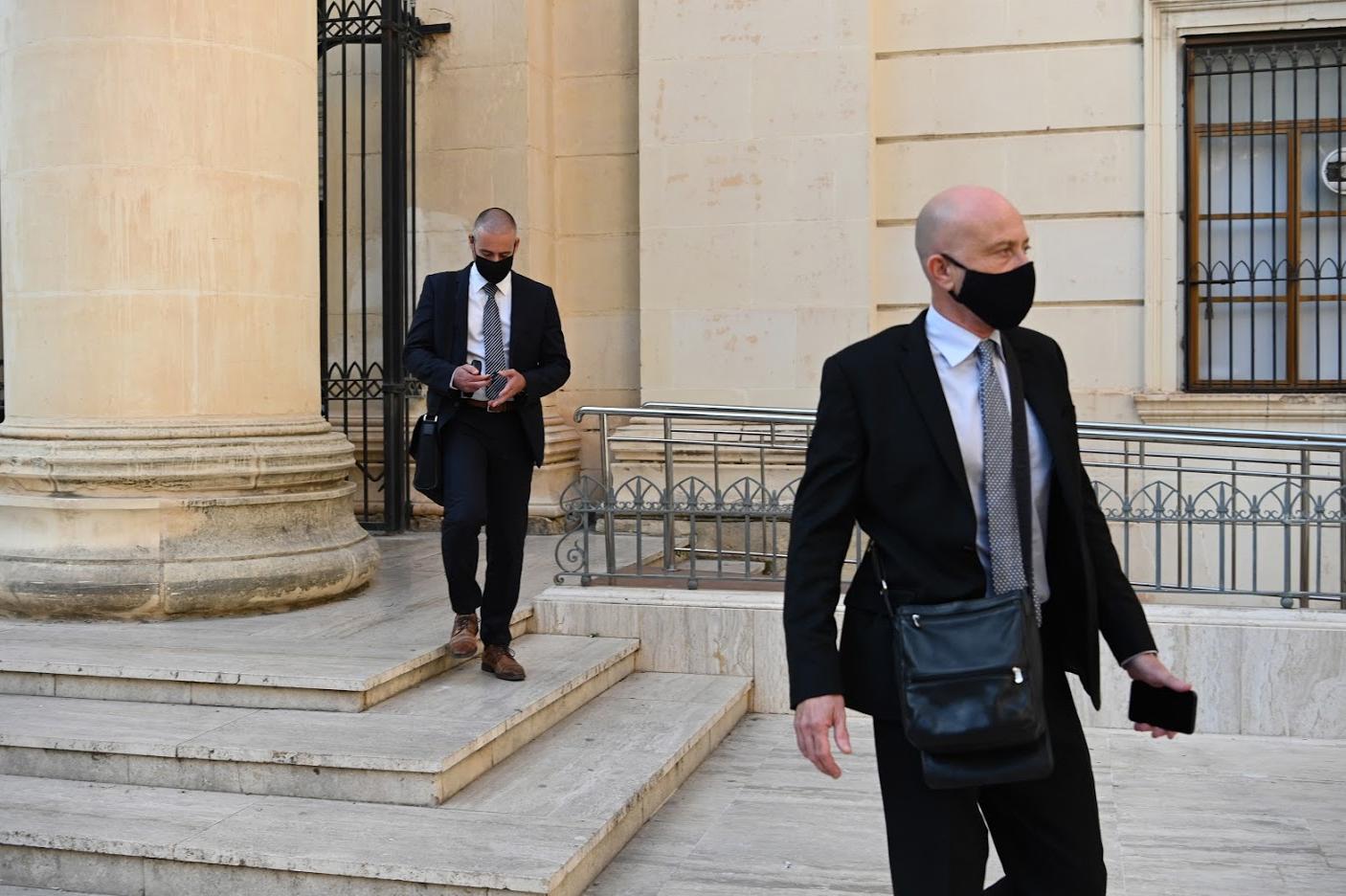 Shell company set up to cover up payments

1.10pm In 2013, Progress Press decided to buy another machine for which it received three offers, including an HP machine represented in Malta by Kasco.

Adrian Hillman and others received commissions on this machine.

According to blueprint, Hillman received €230,000 in commissions.

Several offshore companies were created, including Netwarks Limited, which is owned by Hillman.

RS Paper Supplies was a shell company created to cover up payments to Keith Schembri and Adrian Hillman.

1.05pm The inspector says that the price of the GWS machine was USD13.5 million, payable in 13 instalments.

“The procurement process was vitiated... What had to be a straightforward purchase became a convoluted process to cover up backhanders,” he says.

Matthew Pace from Zenith created a backdated document signed by Tonna saying the funds were for consultancies.

The inquiry concluded that these documents were fabricated.

1pm Xerri is giving the court a timeline of events, including communication between the accused and representatives from Nexia BT and Zenith Finance.

He says a spreadsheet drawn up by Keith Schembri showed how the GWS machine was bought by Malmos Ltd in Gibraltar. It was owned by Schembri, and then bought by Halfort, another Schembri company, and then imported to Malta.

Xerri says this was done to hide commissions from Malta.

12.45pm Magistrate Donatella Frendo Dimech is presiding over the compilation of evidence hearings.

Stefano Filletti and Maurice Meli are defence counsel while the prosecution is led by Inspector Joseph Xerri, aided by lawyers from the Attorney General.