Keith Schembri, the former chief of staff in the office of the Prime Minister as well as Melvin Theuma, the middleman involved in the murder of Daphne Caruana Galizia testified on Wednesday in connection with murder suspect Yorgen Fenech's constitutional case against Inspector Keith Arnaud.

'I'm no traitor to Labour'

12.10pm Questioned by Matthew Xuereb after leaving court, Schembri says he has no apology to Labour supporters as he helped landslide victories to the party.

He would not say what he told Fenech in the 24-minute phone conversation before the suspect tried to leave Malta on his boat.

12.02pm There are no more questions for Theuma.

Marion Camilleri tells the court that the lawyers are to go through the footage from the lock-up (presented in court on Tuesday) and then possibly put more questions to Inspector Arnaud.

Theuma recalls how his health deteriorated when he was told that Vince Muscat (il-Koħħu) was talking about the murder details and gave in to drinking.

He recalls visits by Yohann Cremona and Kenneth Camilleri from OPM at a point when he felt under pressure by the Degiorgio brothers to help obtain bail.

Theuma says Fenech would say Schembri would do anything for him.

Asked if he was aware who was passing on information to Schembri and if Arnaud was ever mentioned, Theuma replies: "no".

The case has been adjourned to January 14.

11.53am: Melvin Theuma takes the witness stand. Lawyer Camilleri asks whether he had passed on any recordings to anyone besides the police?

"Yorgen Fenech," he replies. "I told police not to open them unless before magistrate and my lawyers."

"No. After the murder, Yorgen told me that police had discovered the message that set off the bomb. We had met in November 2017, near a Żebbug car showroom, before arrests of suspects. Yorgen told me to tell the hitmen."

Fenech also told him that Vince Muscat, one of the men charged with the murder, was willing to tell all.

"I was told by Yorgen to go pass the message to Mario Degiorgio," (brother of the Degiorgio suspects), Theuma says.

He says Fenech was obtaining information from Schembri, but says he cannot voich for this.

Theuma repeats the way he had been welcomed to Castille for a job he never really asked for. Yet the cheques kept coming in.

"Yorgen told me: isn't it better? You're getting an extra salary."

Want to read about the 'phantom job?' CLICK HERE

'I never discussed the murder'

11.45am Marion Camilleri: "Did you ever show Yorgen Fenech the messages from Arnaud?"

Keith Schembri: "I never showed my mobile phone to anyone, not in my position'

MC: "Do you know you were mentioned in recordings?"

MC: "Which parts of recordings by Theuma were played to you by police?"

KS: "Several. They were not too clear, but I could make out my name accompanied by some pleasant expletives! I was once mentioned by Theuma who threatened to bring the Degiorgio family behind my door. No one ever spoke to me about Degiorgios' bail." (Alfred and George Degiorgio have been charged with triggering the bomb which killed Caruana Galizia)

MC: "Do you know Kenneth Camilleri?"

KS: "Yes, but I never sent him to talk to Theuma. I never discussed the murder."

Schembri steps off the stand and leaves the room, walking past Fenech. 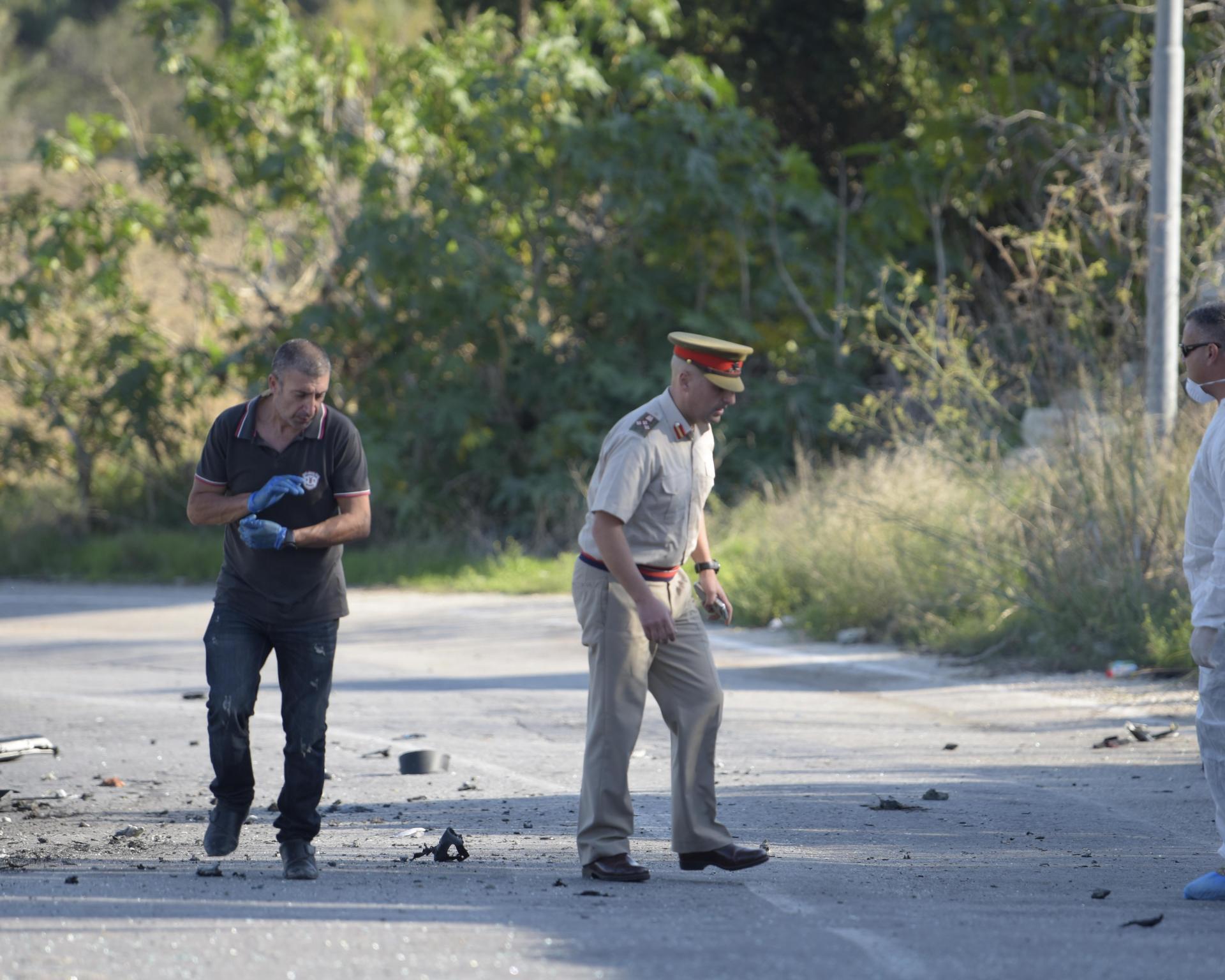 11.30am When Theuma entered the picture, and there was talk of a ‘businessman’ linked to the crime, everyone could “do one plus one,” Schembri says.

He denies Fenech's testimony that he was passing information to him.

"We sometimes discussed what was reported in media, that’s all."

Asked if he was told about leaks to the case, he insisted that he never leaked anything about the case. 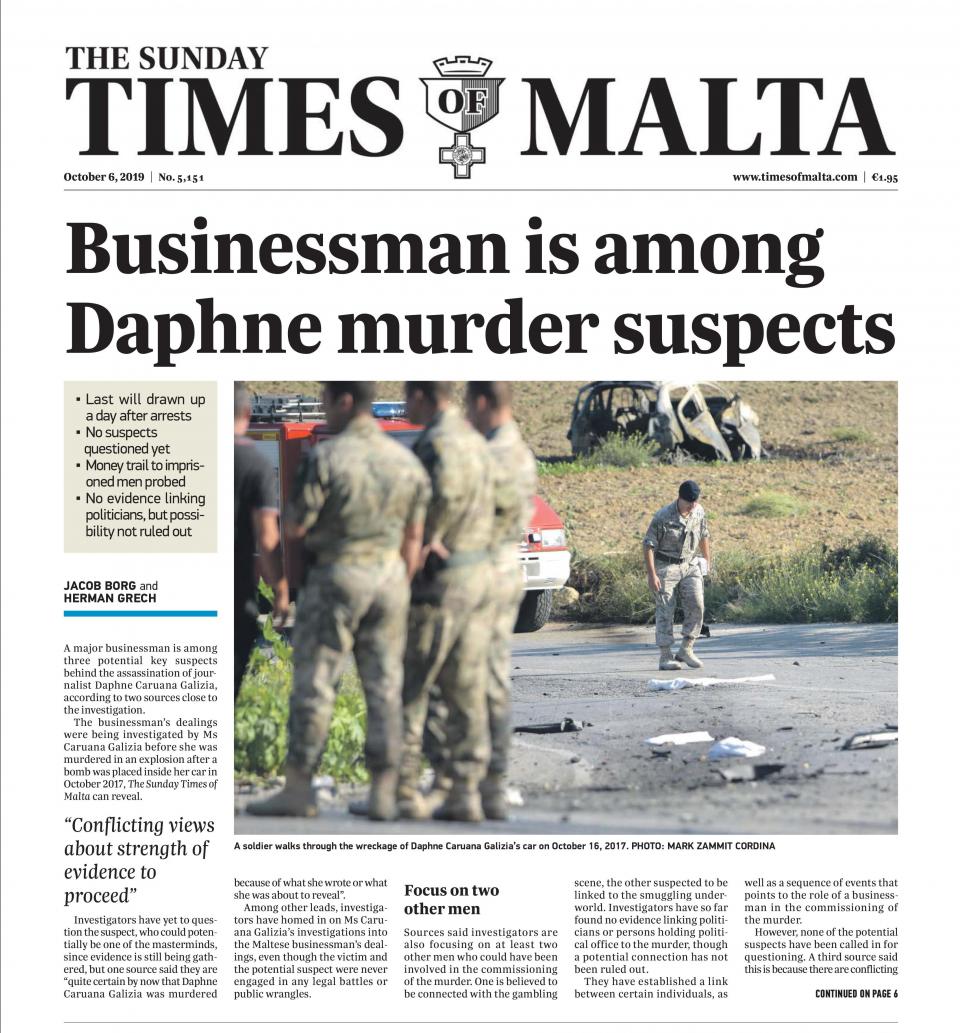 The October 6 edition of The Sunday Times which linked the 'businessman' to the murder.

He says he was first arrested at 5.30am, while news portals were reporting what was going on.

"The media were at the depot before I got there. The story of Theuma was already on portals  before I was even interrogated. So if we speak of leaks."

MC: "Did you pass sensitive information to Fenech?"

MC: "I believe you're not saying the truth."

She points out that Schembri is constantly looking past her in direction of other lawyers.

The communication before the attempted escape

11.25am He is asked about that November day when he "tried to help Yorgen escape", perhaps from Gozo.

Schembri interrupts the lawyer. "I didn't do that."

He says he did not know Fenech's phone was tapped. Such phone tappings are handled by the MSS not the police.

Lawyer Marion Camilleri explains that Fenech's phone was retrieved by police, then handed to Europol.

Schembri says he does not recall the exact day of Fenech's arrest.

I told Fenech, 'do you think that it’s the right moment to leave Malta'- Schembri

MC: "Was there communication with Yorgen Fenech?"

KS: "Yes there was. He asked if someone was following him. I answered no. He told me he was taking his boat to Sicily. I told him, 'do you think that it’s the right moment to leave Malta'.

"How would the country react. Wouldn’t everyone turn against us and allege that we had helped him escape?"

MC: "How long had you known that?"

MC: "So what did you know? Please don’t insult my intelligence."

KS: "Mine too. Yorgen asked whether he could leave Malta. I knew he was under a spotlight. I communicated with him for 24 minutes."

MC: "So did you tell Arnaud about this?"

KS: "No I didn't. With hindsight I know it appears bad. I did what I had to do. I had told no one of my friendship with Yorgen."

11.15am Schembri confirms he met Theuma at Castille because Fenech had asked him to give him a job.

"He never told me that he didn’t need the job since he was a taxi driver, in reply to her questions. I used to have five to six people a day asking for jobs."

How was Melvin Theuma different?

"We would have so many such job requests before elections. I would only handle some 20 per cent."

But Schembri says he recalls meeting Theuma at Castille. He recalls having a coffee, taking a photo and going on a tour to see a portrait of Dom Mintoff.

"It wasn’t related to Daphne's murder. To me they weren’t related.

Schembri insists he had nothing to do with a job given to Arnaud's wife.

'I never informed Yorgen of anything'

11.07am Schembri insists he had no contact with the Malta Security Services. But he confirms he was present at some briefings together with the Prime Minister, the Attorney General and the Justice Minister.

The briefings took place after advances were made in the investigations into the murder.

"Castille does not investigate. Our role was to help, to provide all resources."

Schembri says he personally called the police commissioner, to bring in FBI, right after the murder on October 16, 2017.

As progress was registered, he used to liaise with former deputy commissioner Silvio Valletta. After Valletta stepped down, he would liaise with Arnaud.

What information did Arnaud or Valletta give him?

Schembri insists that he never informed Fenech of anything. He also insists he was not involved in Theuma's pardon.

"I was never involved in any stage, never, never."

When Arnaud would go to Castille and while waiting at reception they had “small talk” about football, and children. 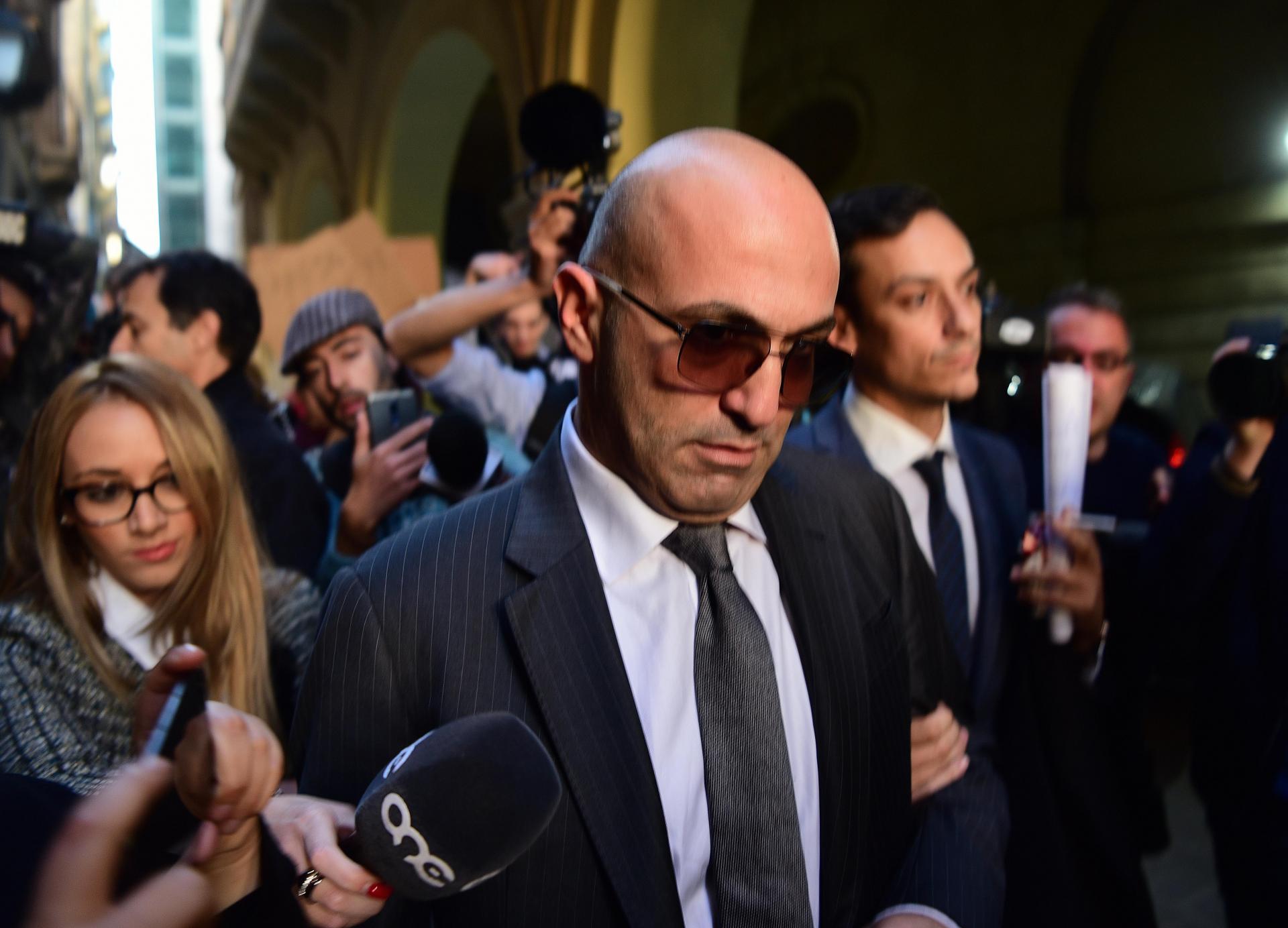 That infamous note passed on

11.03am Arnaud testified that Schembri had passed two notes through the doctor. Schembri says he didn’t write the letter.

"We spoke about those letters at length at the depot. One letter was written by Theuma. Two others had scribbled notes in pen. Police told me those were Yorgen Fenech's notes. I didn’t write any of those notes and I didn't relay them myself."

So was Dr Vella lying?

The name of Chris Cardona was mentioned in the notes.

"I was told that Chris Cardona was mentioned therein. Cardona and I were colleagues not friends," Schembri replies when asked.

10.58am Keith Schembri is being asked about his business relationship with Fenech.

"There was business between our companies, but that’s it," he replies.

He also says he was a friend, and they went abroad together around three times over seven years and accompanied Fenech on his boat once in seven years.

Marion Camilleri: "How often did you call each other?"

Keith Schembri: "I’m always on the phone. Sometimes, a day goes by and I realise that I haven’t spoken to my wife or kids!"

He says he met Melvin Theuma once at Fenech's farmhouse and another time at Castille.

MC: "Why did you go to the doctor when Fenech was arrested?"

KS: "I don’t recall going to the doctor... As for my arrest, I was arrested early morning and was detained for 30 hours first time round. There were several searches at my home and office.

"Electronic devices were retrieved. At my Castille office, even economic crimes officers were present."

'I grew a thick skin'

10.50am Schembri starts by apologising over his no-show on Tuesday. He insists nobody had notified him.

The judge cuts him short: "nobody could notify you if you did not open the door."

Lawyer Marion Camilleri asks whether an article Caruana Galizia had written about him had bothered him. She is referring to an article where the blogger had said the former chief of staff had a terminal illness.

"After a few years in politics, I grew a thick skin," Schembri replies.

The reference was made in the Egrant inquiry published on Tuesday.

10.45am The court is making a clarification. It says the constitutional proceedings are of an urgent nature and therefore court proceedings on Tuesday justified the arrest warrant. The court had tried to notify Schembri but the reply was negative.

Since the witness had not opened his door to the court messenger earlier on, giving rise to delay, the court had thus ordered the issue of the arrest warrant. 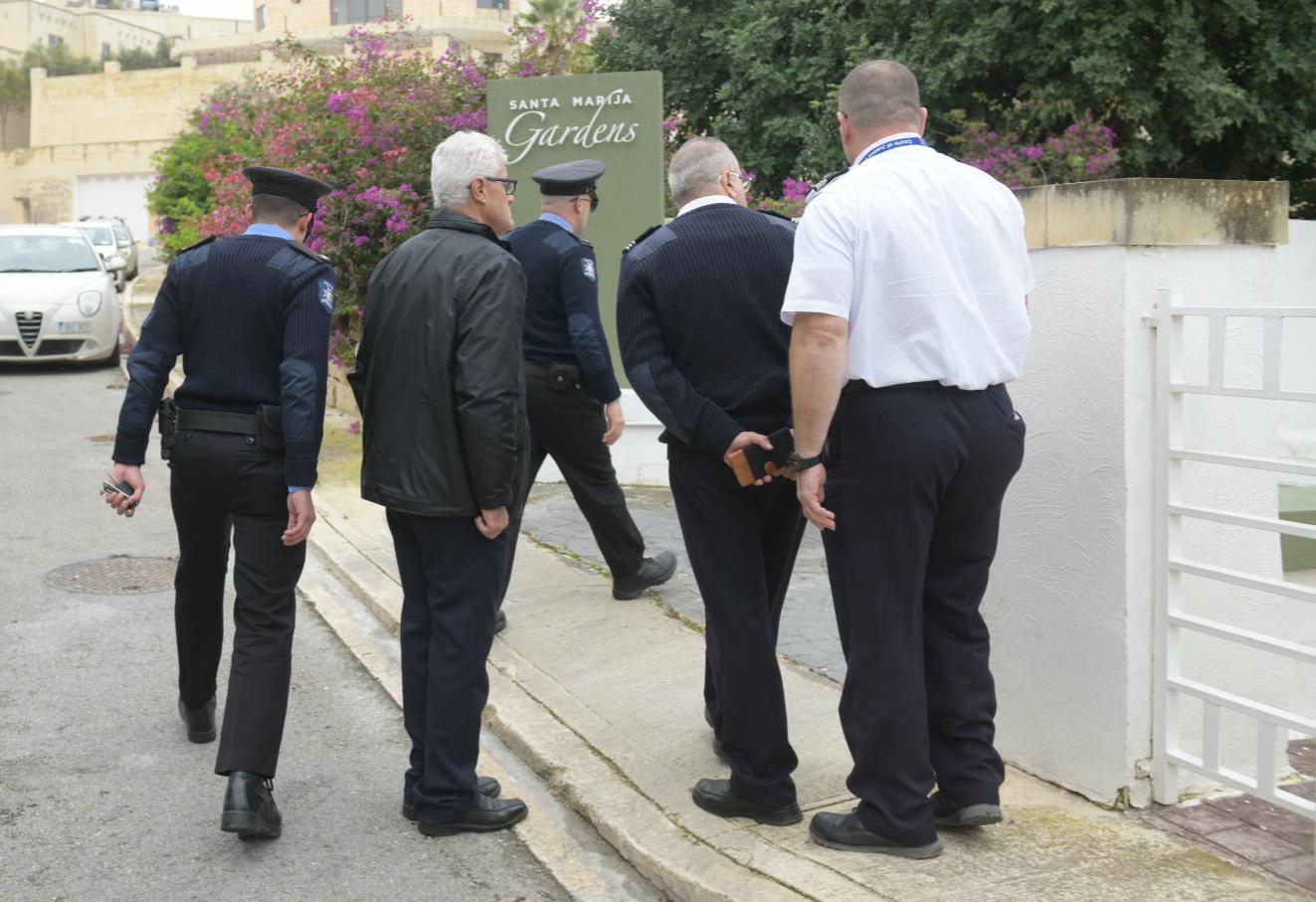 10.42am The man charged with Caruana Galizia's murder has entered the court room. The court is in session now.

10.37am Everyone has been asked to vacate the hall. All those inside were asked to stand in two separate lines, males and females. Everyone is being frisked under the watchful eyes of security.

10.30am Keith Schembri has entered the court room. Fenech has implicated the former chief of staff in the crime, a claim he has denied. Schembri was also arrested and released after giving a statement to the police detailing what he knew about a phantom job given to the alleged middleman in the murder plot.

Our reporter Matthew Xuereb was outside the court as Schembri arrived but the former chief of staff did not give any comment.

10.20am Melvin Theuma has entered the court room, accompanied by two police officers. There appears to be little space in the room, swarming with security officers. Daphne Caruana Galizia's parents and sisters are seated at the back of the hall.

Theuma will be assisted by Matthew Brincat and Kathleen Calleja Grima. 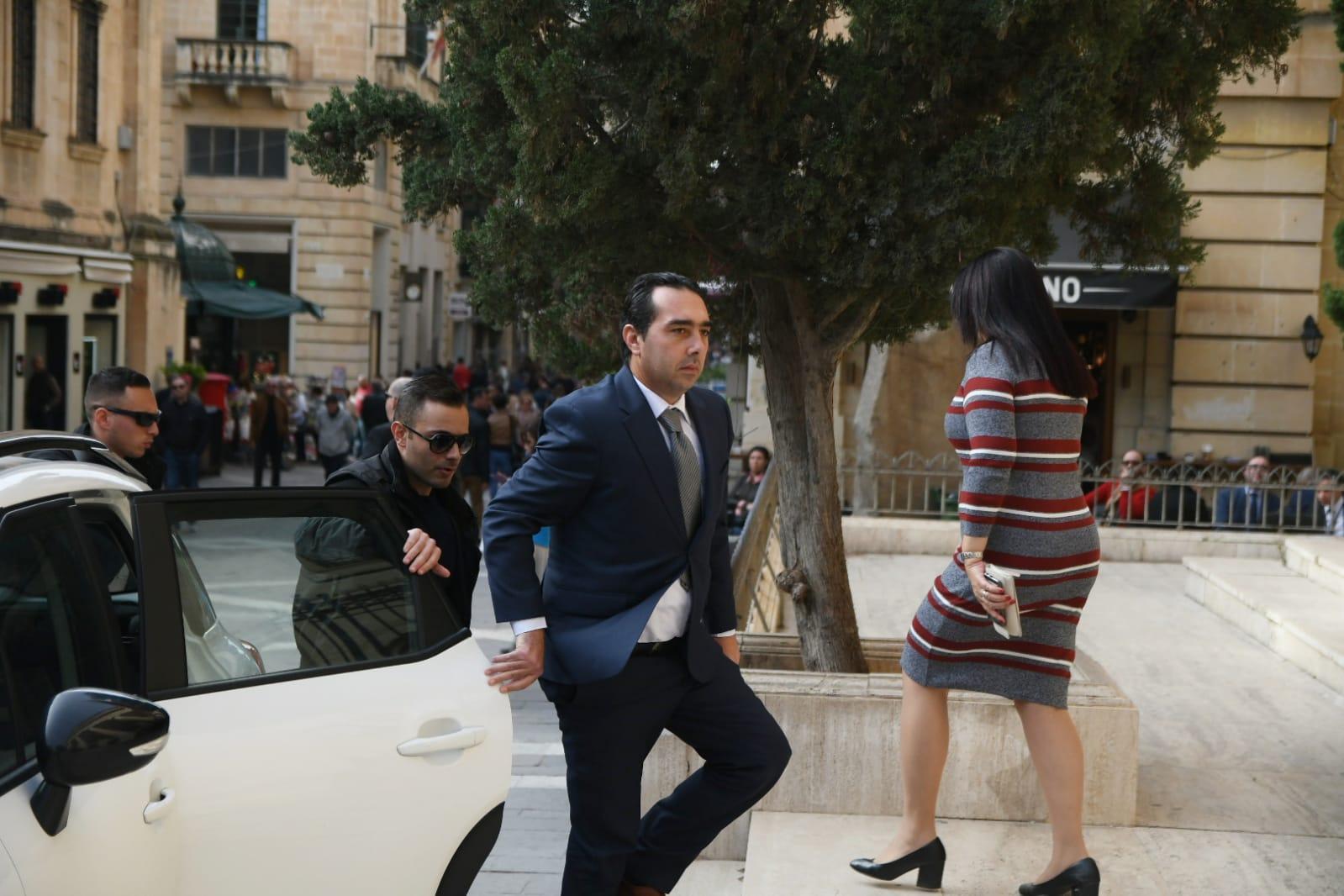 10.15am We're due to resume the constitutional case that Yorgen Fenech has filed against Insp. Arnaud, in an attempt to have him removed from the case.

Key to Fenech's argument is his claim that Arnaud has a "close relationship" with the Prime Minister's former chief of staff, Keith Schembri.

10am It was a day of action on Tuesday morning, both outside and inside court. These were the highlights: