Daphne Caruana Galizia's alleged murderers were back in court on Tuesday morning as the compilation of evidence against them resumed.

2.08pm: A metal bar found around the bomb showed the device was an improvised explosive device. There was evidence of welding, grinding and sanding so it might have been made specifically to kill the journalist. It was clearly constructed and designed by a bomb maker from material easily found on market. A number of metal fragments were found inside the victim's body.

"Everything shows that perpetrator wanted to target and kill the driver and anyone else who might have been riding as as passenger," Mr Cmarec says.

2pm: Expert says investigations had concluded that it was the blast which killed Daphne Caruana Galizia - anyone sitting in the car there would have had a 50 per cent chance of being killed, as would have anyone in the vicinity of the vehicle.

1.50pm: It was clear from investigations that the car was destroyed by a chemical explosion through a bomb located on the floor board under the driver's seat. The explosion was strong enough to create a "blast shockwave and high blast pressure in the surroundings", the Europol expert says. 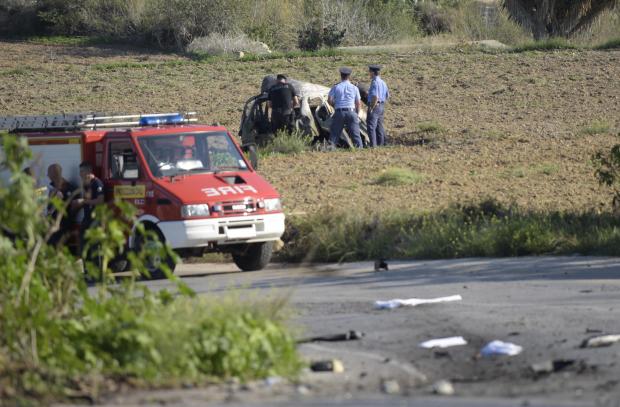 Experts concluded another passenger in the car would have had a 50% chance of also being killed in the blast. Photo: Mark Zammit Cordina

1.42pm: Expert says the victim's car was inspected at the St Andrew's compound before it was moved to the police compound. The car was so badly damaged that most of the potential evidence had been destroyed.

1.36pm: Europol explosives expert Mario Cmarec testifies next. He says his help was requested on November 4 - that's two weeks after the car bomb.

1.31pm: FBI agents complete their testimony. Defence lawyers say they are reserving their right to cross examine them at a later stage.

1.18pm: Suspect George Degiorgio’s phone was on a boat sailing up and down the coast. It was the phone which sent the text message to detonate the bomb on October 16, the FBI says. His phone was still active later in the evening and next morning.

Alfred Degiorgio’s phone was switched off on October 16 and was only switched back on when he received a call from his brother George.

1.10pm: The FBI focused on four towers spaced far apart so as to eliminate "false positives". Inspector Keith Arnaud asks where the investigators had obtained their cell data information. Vodafone, they reply.

1.05pm: Cell towers used by all three mobile devices on the day of the murder between 2.28am and 4.46am showed phones in the St Paul’s Bay Area. There was also activity in Bidnija/Mġarr in the early hours of that morning. Daphne Caruana Galizia was killed metres away from her home in Bidnija.

12.56pm: Investigators traced a phonecall from Bidnija which lasted 107 seconds, ending with a text message at 2.59pm.

12.46pm: The FBI investigators are chronicling the way mobile phones were topped up, SIM cards swapped and text messages exchanged. One of the mobile phones was in Bidnija, the other out at sea. Based on the information in hand, the agents concluded that they were the phones used to detonate the bomb which killed Daphne Caruana Galizia.

12.22pm: FBI agents say the phone used to trigger off the blast had only been used twice before - in January and August 2017. At 1.41am on October 16 that phone was turned on. It remained in same location until it received a text message from another number with a 356 prefix at 2.58pm. The message read:'#rel1=on'.

It was then disconnected from the network. 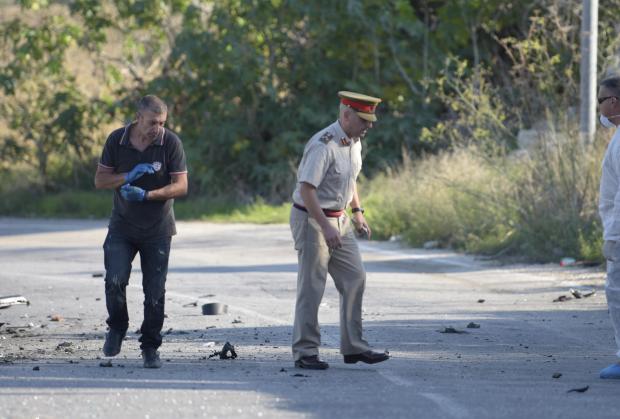 12.18pm: The American investigators provided assistance to local officers whether the car bomb was set off by a mobile phone and then to trace possible numbers of mobile phones involved in the crime. They ultimately identified 53 different devices used between 2.58pm and 3.03pm on the day. One of the phones was never used after the blast which killed Ms Caruana Galizia.

12.14pm: Agent says the FBI was in Malta just two days after Daphne Caruana Galizia's murder. They headed straight to the crime scene in Bidnija to "understand" the place.

12.10pm: Agents Richard Fennern and William Shute say they specialise in combining mobile records which allows them to establish the location of each call. One of the agents says he's been specialising in the matter for 18 years.

11.56am: As soon as FBI investigator gets up to testify, defence lawyer William Cuschieri stands up to object. Dr Galea Farrugia from the AG's office says the lawyer's behaviour is disrespectful to the court.

11.51am: Magistrate Claire Stafrace Zammit returns to the court room as the accused are escorted back. In view of previous decrees, she says the compilation of evidence can go ahead. 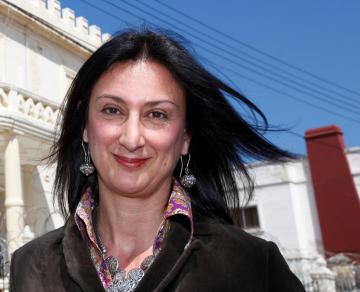 11.32am: Some background to this: The Attorney General has argued that the multiple constitutional cases were just attempts by the defence lawyers to block the compilation of evidence. Once 20 months are up, the accused would have to be released from preventive arrest.

11.28am: We are still waiting for the magistrate to make a decision. In a nutshell, today's case hasn't even started yet. The lawyers are engaged in a war of words over whether FBI officials - who were involved in the investigations - should be permitted to testify today.

11.03am: The magistrate has sent a word to guards to accompany the three accused men down to the lockup as she tries to establish a way forward.

10.54am: The three murder suspects remain in the court room as the magistrate tries to find a way out of the impasse. Daphne Caruana Galizia's husband, sisters and parents are also present. Three guards keep an eye on proceedings.

10.48am: Voices are raised after defence lawyer Martin Fenech says he wants to continue speaking. The sitting is suspended.

10.34am: The magistrate appears to be rather annoyed and asks defence lawyers why they did not ask for these measures last time when a date was fixed for the FBI officials' testimony.

Lawyer William Cuschieri replies: "First I have to discuss matters with my client. I don't always know beforehand what I'm to do".

10.31am: Lawyer Therese Comodini Cachia points out that according to local case law, a court may only refrain from continuing to preside over a case by way of a most exceptional measure. 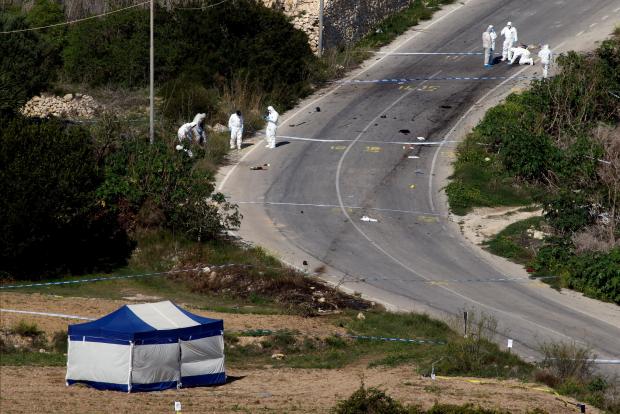 10.21am: Parte-civile lawyers make a statement: On the strength of a long line of case law, in view of fact that this sitting has been fixed for two months, and the fact that Judge Schembri Orland yesterday (on Monday) said in her decree that suspect Alfred Degiorgio's request was "frivolous and vexatious" and just delaying tactics, the FBI testimony should be heard.

10.13am: Dr Philip Galea Farrugia, lawyer from Attorney General's office, hits back - the court must now put its foot down on this "abuse" of procedural laws. He says this is nothing but an ongoing attempt to block proceedings and cause delays.

"Should the FBI be heard today, there would be no prejudice to accused's rights because if his constitutional cases are won, the evidence would just be removed from records of the case before it goes to trial. Where is the prejudice?," he says.

An ongoing attempt to block proceedings and cause delays- AG's office

10.10am: Dr Cuschieri requests that the magistrate does not proceed with hearing FBI witnesses until final judgments or else the magistrate is to make a constitutional reference to the First Hall, Civil Court on the matter.

Proceeding otherwise would violate his client's right to a fair hearing in terms of the Constitution and EU Convention, he argues.

10.06am: If you've just logged on now, the court sitting got off to a stormy start, after defence lawyers objected to statements made by lawyer and MP Jason Azzopardi in parliament.

10.05am: Dr Cuschieri informs the court that appeals are being filed to decrees rejecting requests for interim measures. Meanwhile he asks that pending the outcome of those constitutional decisions, the FBI should not testify in the compilation.

10.02am: Jason Azzopardi clarifies that in parliament he had emphasised more than once there was presumption of innocence, and that the argument was a political, not a legal one. He says he based his statement on transcripts of evidence and MPs have a right and duty to speak in parliament.

10am: Dr Fenech insists on dictating a formal statement in records of case requesting remedy or some form of protection from court. Other defence lawyers join in.

9.58am: Lawyers continue bickering in court. 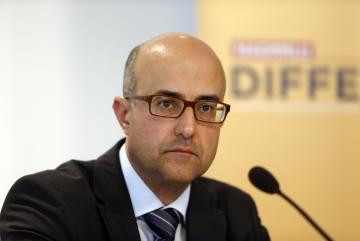 "What can I do?", the magistrate asks. "I cannot do anything about what is said in parliament but whatever was said there will not influence me."

Jason Azzopardi insists that he always declared that accused are still deemed innocent. Magistrate tells them that precious time is being wasted.

Dr Azzopardi gets up to repeat what he said in parliament. He says he is reading from the accused's statement. Tension in the courtroom, with lawyers trading accusations.

9.50am: There are six armed guards in a courtroom, which is today more crowded than usual.

9.42am: One of the suspects, Alfred Degiorgio had filed a constitutional application arguing that electronic data about the case had been collected under a law repealed by an EU directive. Judge Anna Felice has turned down the request for an interim measure blocking the data. The case will still continue to be heard.

9.30am: The key players assemble in the room a day after the court blocked an attempt by one of Caruana Galizia's murder suspects to stop the FBI from testifying in the compilation of evidence.

Ms Caruana Galizia was killed in a car bomb blast on October 16 close to her home in Bidnija. During an interview with the Daphne Project the victim's son recalled the full horror of that afternoon.

In December, police arrested 10 men in connection with her murder.

Three of those - brothers Alfred and George Degiorgio and Vincent Muscat - were charged with her murder. The others were released without charge.

So far, the magistrate has heard how:

Martin Fenech is appearing for Vince Muscat, known as il-Koħħu, 55 and from Msida.

William Cuschieri and Martha Mifsud are appearing for Alfred Degiorgio, known as il-Fulu, 53, and from St Paul's Bay.

Philip Galea Farrugia from the attorney general's office and inspectors Keith Arnaud and Kurt Zahra are appearing for the prosecution.