Former parish priest Deo Debono was on Monday sentenced to a suspended jail term after pleading guilty in court to theft of sacred art, including paintings and silverware.

He was also ordered to pay €9,500 to a third-party victim of fraud.

Fr Debono made his admission during his arraignment before Magistrate Ian Farrugia and was told by the court to reconsider, since the charges make him liable to a jail sentence.

"It’s not like stealing €20," the magistrate explained. "The charges are serious and carry serious punishment."

Fr Debono then consulted his lawyer and was asked by the court again whether he understood the gravity of his admission. He nodded in agreement.

Proceedings related to punishment were then held behind closed doors. Magistrate Farrugia handed down a two-year jail term suspended for four years.

In delivering judgement in open court, the magistrate said he had considered the early guilty plea and the fact that all the stolen artworks had been recovered.

The accused had taken nothing for himself, the court said.

There was also an element of humiliation and blackmail, the magistrate said, and the priest had ended up selling the items to a third party for just €9,500. 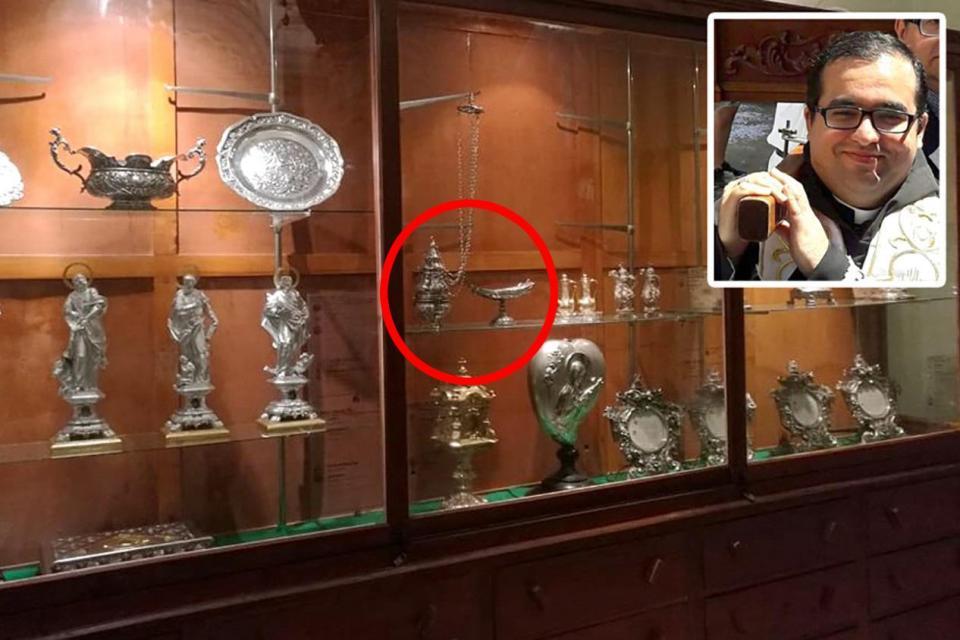 The stolen censer and incense boat (circled) that was found in antiques shop and connected Fr Deo Debono (inset) to the incident.

Fr Debono was parish priest of Saint Augustine parish in Valletta until last month, when he was promptly removed in the week of the parish feast when the police investigations were revealed.

He has since been stopped from exercising his priestly ministry in public. The ban remains in place for as long as police investigations and any other procedures in the Civil Court are concluded.

The theft happened at Saint Augustine's Church some months ago but it was not immediately noticed because the stolen paintings were replaced by others in the convent's corridor during maintenance works.

The police began to investigate the priest when a stolen cassolette - an incense boat - appeared at an antique shop.