The LNG tanker that is on its way to Marsaxlokk will have to be anchored away from the coast during storms, cutting off the power station’s supply within minutes, according to experts in the field.

In 1969, a storm drove the Greek tanker Angel Gabriel ashore.

When it arrives in Malta from Singapore, where it was converted, the floating gas storage vessel will be berthed next to the Delimara power station and will eventually feed gas to it.

But its proximity to shore will be a concern in an area that has a history of large vessels running aground in fierce south-easterly gales. In such weather, the tanker will have to be moved to minimise the risks involved.

This means the supply to the power station will be severed.

Since there are no land storage facilities – contrary to the Labour Party’s pre-electoral energy plan for the country – the electricity supply will have to switch to another element in the energy mix, namely the interconnector.

The switch will have to take place within a few minutes, which may present technical difficulties, according to the experts, who did not wish to be named.

The area where the vessel will be berthed has a history of fierce gales. Precisely 47 years ago, on September 23, 1969, a storm drove the Greek tanker Angel Gabriel  ashore. One of its tanks caught fire as it hit the rocks.

In 2006, oil-bunkering vessel the Golden Bay ran aground at St Thomas Bay, Marsascala, after it developed mechanical problems and drifted rapidly towards the shore in rough seas. It took two tugboats and a barge the best part of an afternoon to pull the seven-metre-long vessel from the rocks.

The risks associated with the floating storage vessel are supposed to have been addressed in a study. However, the consortium behind the project, Electrogas, has yet to allay public concerns, as it will not divulge the contents of the study.

The study, prepared by a maritime research institute in the Netherlands as part of the environmental impact assessment, delves into the effect bad weather could have on the vessel when it is placed in the middle of Marsaxlokk Bay.

There is also the question of the equipment and training required by the Civil Protection Department if ever internal safety and security measures were to fail.

The CPD has a national obligation to intervene in such an eventuality. At the airport, for example, it has a permanent presence, with dedicated equipment, such as fire engines, in case of an emergency.

However, The Sunday Times of Malta is informed that while the CPD is undergoing training to handle such risks and has started purchasing the necessary gear, it remains in need of equipment worth millions of euros to ensure round-the-clock protection from the risks associated with the project. 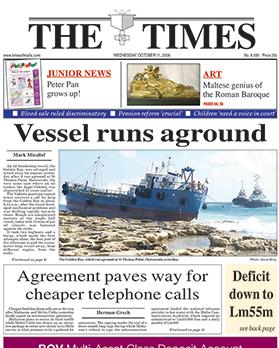 The Golden Bay ran aground at St Thomas Bay, Marsascala, in 2006.

The government has not replied to questions sent over two weeks ago on the subject.

A spokeswoman for Electrogas – the consortium that includes partners Gasan and Tumas, who have been at the centre of controversy over high-rise permits in Tigné and Mrieħel – told this newspaper the group followed international best practice and Environmental Impact Assessment requirements, adding it had given copies of the study to the relevant authorities for their analysis. Asked for a copy, she said Electrogas “has no remit to make this report public”.

This newspaper has already asked Transport Malta and the Occupational Health and Safety Authority for a copy of the assessment. Both refused, saying they did not own it.

This newspaper is informed the power plant, when completed, will not be run by Electrogas itself, since the management has been subcontracted to an Irish company.

The spokeswoman confirmed that ESB International was chosen earlier this year as operator and maintenance contractor for the power plant section of the Electrogas facilities in Delimara.

Electrogas would not say when the new power plant, which was originally planned for March 2015, will begin operations. Minister Konrad Mizzi gave the end of summer as a deadline after his two-year timeline had passed, as critics had predicted it would.

The European Commission is still analysing a €360 million unprecedented government guarantee granted to banks to lend money to the consortium for the financing of the project. The project is tied to an 18-year power purchasing agreement, which is also under EU scrutiny.

Meanwhile, marine traffic monitoring sites show that armed guards are now on the vessel on its way to Malta. This notification was not there in recent days when the vessel’s journey was being monitored.