Looking on the sea from afar, we imagine a scene of quiet serenity, but the opening shot of the film Luzzu reminds us that the sea is a cacophonous, roaring place. On our island besieged by the Mediterranean, to venture out to sea is to wade into the wilderness.

Luzzu, writer-director Alex Camilleri’s debut film, is a story about a fisherman’s struggle against all manner of forces threatening his trade, from family and financial exasperation to cut-throat commercial encroachment.

We meet Jesmark (Jesmark Scicluna) on his luzzu handling fishing nets with the deftness of one born to be a fisherman, as indeed he was. Having come from a long line of fishermen, each using the same luzzu for their trade, Jesmark shares a connection with his vessel spanning generations. Time, however, has taken its toll – a leak in the luzzu causes concern.

Adding to the concern is Jesmark’s new-born son, who is not growing at a healthy rate. Jesmark and his girlfriend Denise (Michela Farrugia) must buy him expensive baby formula to help him recover, but money is tight and Jesmark’s earnings aren’t cutting it, as Denise makes clear. She decides to move back with her mother temporarily, who is likewise unsupportive of Jesmark’s line of work.

Jesmark finds opposition to his trade from all fronts. He is unable to sell the fish he and fellow fisherman David (David Scicluna) catch, whether at the fish market or to seafront restaurants. Local fishing regulations are also burdensome, forcing them to dispense with fish they catch out of season despite the money they would be forfeiting. Inspectors breathe down their necks as they come back ashore. 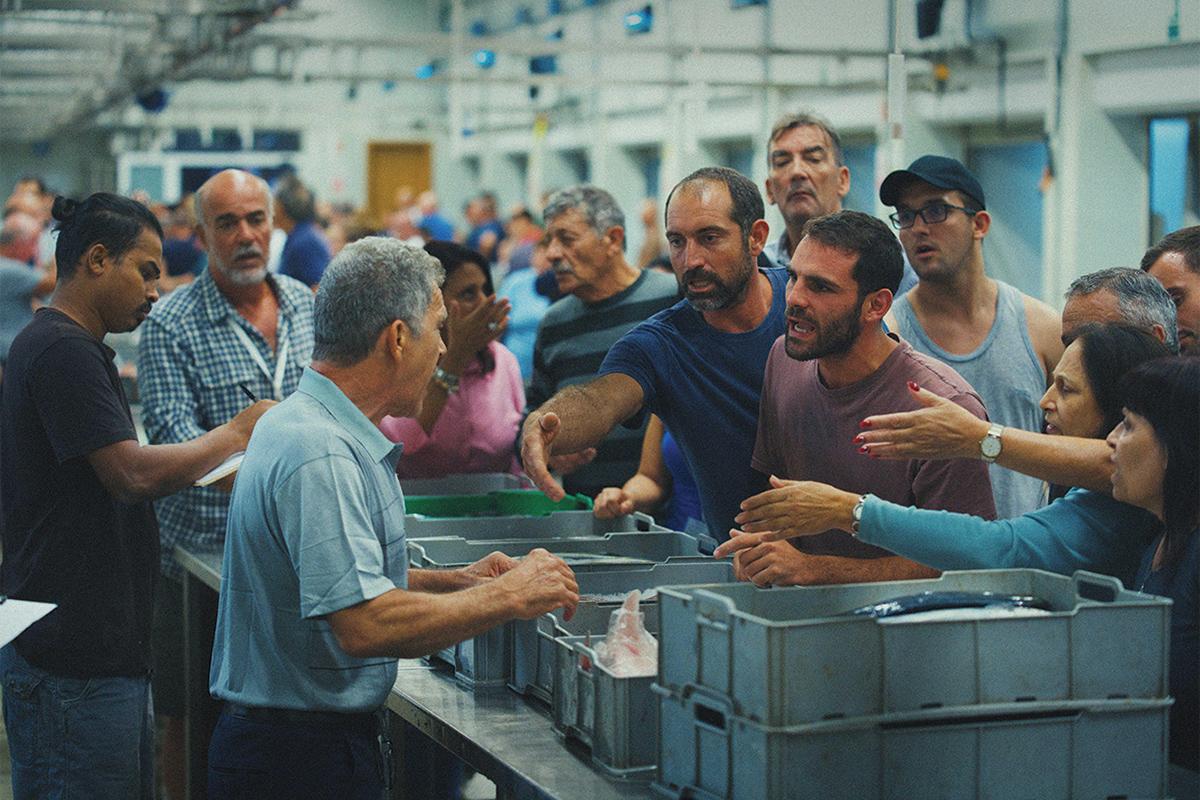 Jesmark and David, played by David Scicluna, trying to sell their catch.

But only common fishermen are bound by rules, it seems. Jesmark soon discovers the black-market dealings taking place in the shadows, which he enters while his luzzu is being repaired, leaving him out of work. Here he smuggles fish and makes other unlawful transactions; he even sees an inspector accepting bribes. Finally making some money again, it seems that corruption was the only route left for him to take.

Only there is another option hanging like an albatross around his neck. Many of his fellow fishermen gave up their trade as part of an EU initiative funnelling fishermen from the sea into more commercial industries. Finally able to return to his trade in his repaired luzzu, complete with blessings from the local priest, Jesmark knows he has a choice to make. With a heavy heart, he accepts the fate others have chosen for him.

Trades the world over are swallowed up whole by ravenous modernity

Luzzu is a tale of great emotional resonance precisely because of the familiarity of what we are witnessing. Trades the world over are swallowed up whole by ravenous modernity and industrial excesses, leaving fishermen and other tradesmen forced to compromise on fundamental aspects of who they are. Regulations are concocted with everything but fishermen in mind, sanitising their trade and stifling their income, threatening their own and their families’ subsistence.

It is telling that corruption is seen to be the more successful option in this scenario. A fisherman who must provide for his family while not compromising his trade and identity has little choice but to play in an alternative system whose rules are in his favour, for a change. Corruption can sometimes be indicative of the fractures that caused it. 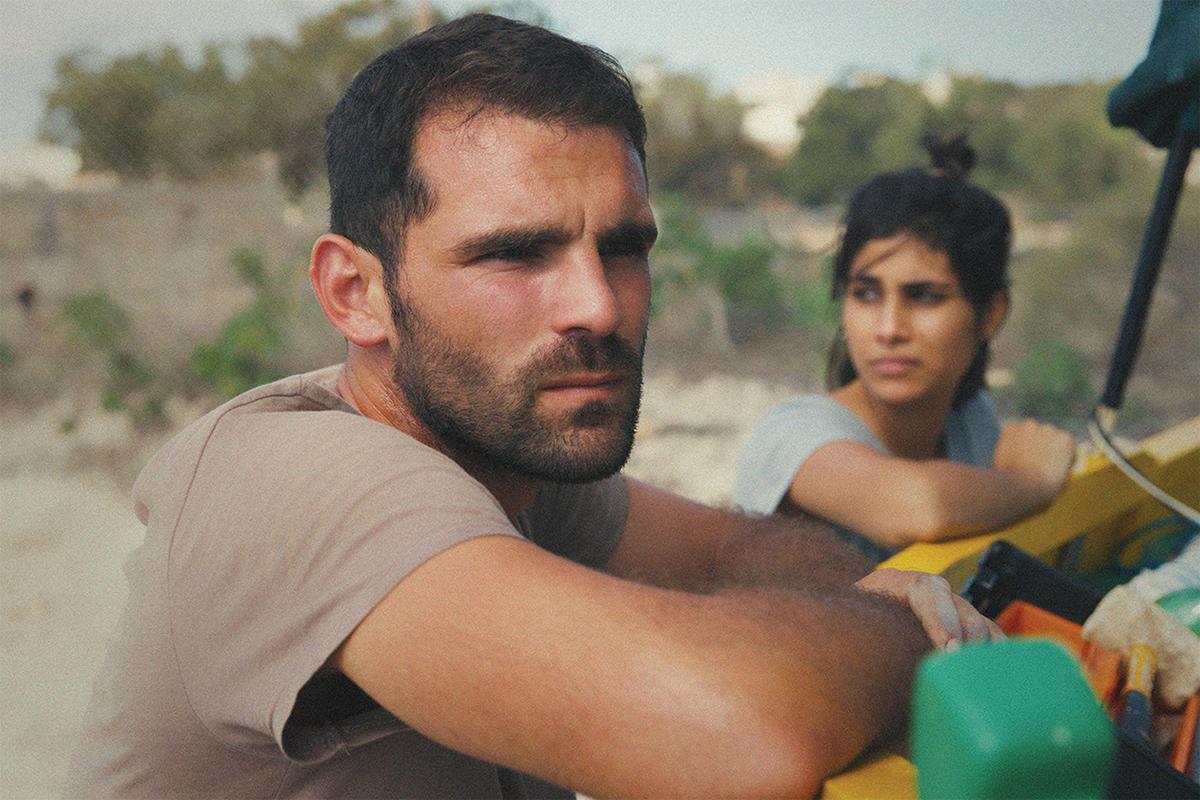 Jesmark with his girlfriend Denise, played by Michela Farrugia.

A striking feature of the film is its depiction of masculinity. Jesmark’s struggles not only challenge his identity but also deal directly with what is expected of him as a family man. His expression rarely betrays him – it is not always clear what Jesmark is feeling – but nothing is really left unsaid. While restrained, he is entirely honest.

In what feels like a cruel transactional requirement, Jesmark must scrap his luzzu to avail himself of the EU-backed scheme. As Jesmark walks away from his vessel as it inches closer towards destruction, we experience a scene of great symbolic and emotional weight, made more poignant by the director’s choice to focus the scene on Jesmark’s unrevealing face.

The generations-old luzzu had to be sacrificed for Jesmark to free himself from his besieged trade, but in return Jesmark had to sacrifice a part of himself to provide for his family. For all the sanitisation it purports, modernity still asks for blood.

Jesmark’s stony, resolute countenance expresses more than any outburst ever could. Rather than being told what to feel, the audience has no choice but to turn inward; it is at that point that our own feelings become crystal clear.

Some of us may watch this film and feel some nostalgic sadness as we mourn the loss of traditional trades, and others may watch awash with grief at the parts of themselves they have had to sacrifice at the altar of modernity.

At the end of the film, we see Jesmark tell the story of his luzzu to his son. He tells him that the luzzu was both theirs and everyone’s and had undergone repairs by countless hands with practically every bit of it replaced. He asks in the end whether the luzzu, having lost so many of its original parts, is even the same luzzu it once was, much in the vein of the paradox of The Ship of Theseus – a thought experi­ment on the metaphysics of identity.

There is no satisfying resolution to this paradox – “philosophy is a route of many roads leading from nowhere to nothing” wrote Ambrose Bierce – but one possible resolution may be that identity is not fixed and nothing remains the same through time. As the credits roll on a film about the ravages of modernity, we find that we have really watched a film about the ravages of time.