I once heard family described as friends you haven’t chosen. That can be said of many relationships. It applies to colleagues and it applies to neighbours, for instance. There’s a proximity that you can’t really avoid and this forces a relationship of some sort. If both sides are happy with the arrangement, things work beautifully. If not, it could end in tears.

But life isn’t so clean cut. It’s more likely to be a series of break-ups and make-ups, cycles of merry co-dependency and strained but polite how-do-you-dos. Our proximity to Sicily goes back to the time the land mass was still stuck together. Then I’m guessing there was a period of nothing until we figured out how to build boats and, since then, we’ve had dozens of courtships and animosities, most of which forced upon us by empire builders and their sworn enemies.

The last decade has seen a rather sharp increase in relations. We go there, attracted by the prospect of an island with actual space and good food that isn’t blindingly overpriced. To thank us for the custom, Sicilians have been hopping over to our crammed shores to set up shop. It appears to be a happy time for the neighbours, with heaps of mutual respect building up.

I spent the weekend there with a couple of guys who love to eat and drink as much as I do so, as one can imagine, we did plenty of that. The last event of the evening, on a full stomach and guided by the wisdom that wine and bitter liqueurs impart, was a detailed planning of breakfast. Over breakfast, we planned a second breakfast and lunch. You get where it went from there.

By the third day we were wondering when we would be either disappointed with a meal or overcharged. Neither had happened. On the first night we ate a spread of raw seafood that had been caught a few hours before, a pepata di cozze that topped my personal charts and then moved on to first course of pasta with red mullet (trilja). When we staggered out, we’d paid so little it felt like robbery.

This wasn’t a stroke of luck. We head over when we manage to make time to and are inevitably treated like royalty and fed well. It’s not just seafood. We ate beauties based on mushrooms from the Etna while tackling its baking slopes and attempted to eat as many parts of the black pig that’s indigenous to the Nebrodi when snaking through its dozens of villages, where time appears to have stood still a few decades ago.

It’s the consistency that gets to me – the ability to combine clever cooking, exceptional ingredients, friendly service and solid pricing across the board. At one of the places we randomly picked as a quick overnight pitstop, the restaurant served 15 little dishes for €12 and they suggested we wait until we were done before ordering any further courses. We didn’t need to and, because we chose to, spent significantly more on an excellent wine than we did on food.

Riding this experience, I spied a Sicilian restaurant and café just off the Coast Road while driving past Baħar iċ-Ċagħaq one morning and quickly turned off the main road, stopping for a coffee and a cornetto with sweet ricotta. I asked the man who looked like he was managing the place what dinner was like.

He said that I should reserve a table and visit. They had all you’d expect of a restaurant as well as a selection of lovely pizza, he explained, and we’d be better off securing a table. He’d even serve us personally, he added. So I did as he suggested and returned that same evening.

The bay looks lovely at sunset. Between us and the bay, a thousand cars jostled for parking in an insanely chaotic jam while the typically inconsiderate drivers stopped in the centre of the road to buy ice cream. It’s weird that the joy provided by frozen, sweetened milk should be offset by so many frayed tempers but then that’s part of who we are.

We, eventually, negotiated the mayhem and walked into the restaurant and the calm that it affords. It’s rather spacious and probably fits 50 tables on the ground floor, with more seating on the first floor.

The first girl who saw to us was sweet enough but was new to the place and was having the occasional language issues when I asked for details about some items on the menu. In a minute, our man from that morning was with us, joined by a very capable Italian girl and things progressed more smoothly.

The man is quite insistent. I wanted to start with the raw seafood platter and the zuppa di cozze for us to share and then order our first or second courses depending on how hungry we were. He wouldn’t hear of it and said we’d risk having our orders collide with those of other tables. I said I was fine with that but he wasn’t budging so I picked the spaghetti with sea urchins from the list of primi piatti. The better half was undecided so our man quickly pounced with, “lobster for the lady then?”.

He had no idea what he was up against. Eventually, we got up to have a look at the display of fresh fish. As is the case in the majority of restaurants that serve fish, the display consisted of the usual suspects – sea bass, sea bream, swordfish, and salmon. The fact that our market eats so much farmed salmon says a hell of a lot about us. Luckily, there were a few baby dentici and the better half picked one, possibly as the only break from the monotony of the ubiquitous farmed fish. He picked it out, placed it on a plate, and told us he’d add a couple of king prawns and a squid.

We couldn’t be bothered arguing and returned to our tables, feeling that our own individual upselling games weren’t a patch on his. He tried the same game when it came to wine but I was set on a Greco di Tufo and was firm this time.

Our starters were served very quickly. The zuppa di cozze is good but not special. The broth itself is kind with tomato paste in it so it’s rich and acerbic and full of savoury goodness. The mussels themselves aren’t as fresh as one would get with the day’s catch so they have to be cooked a tiny bit more than I like them to be. I enjoyed the dish though and it would be unfair to compare to its counterpart that had brought tears of joy to my eyes just a couple of days prior. 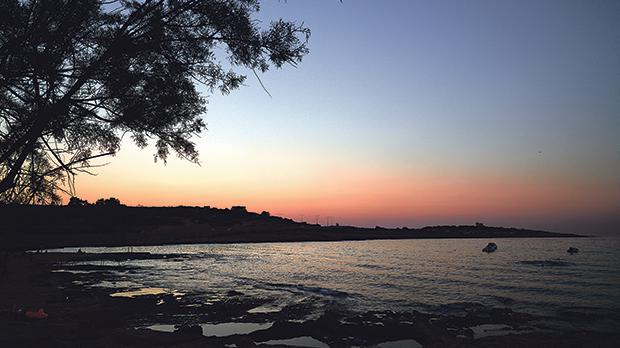 Our main courses were served with a couple of minutes delay between them so my pasta gently cooled and continued to cook in its sauce while I waited for the fish to land. When it did, it was bit of a mixed bag. The fish had been grilled beautifully and the flesh parted from the bone with the slightest touch of a fork. When dentici are so small they have the most delicate of flavour and the cooking had really done the fish justice.

The prawns, however, reeked of ammonia though, so much that it is almost impossible to taste anything without the overpowering smell then taking over. The solution was to move them on to a side plate and put this on the other side of the table, to enjoy the fish and the similarly excellent grilled squid.

My pasta was good but not great. It’s overly generous as a primo piatto and there isn’t enough of the sea urchin to go around. This would be acceptable were the dish not priced at €18. For this price, I expect the pasta to be the kind of dish you remember for all the right reasons when recommending the place to a friend six months later. It wasn’t memorable nor was it  worth recommending.

Just over €100 later, we were out of there, concluding that the next time we visited for the sunset views we’d order a pizza. The table next to us had eaten a couple of beauties that we figured would be well worth a try and they’d surely made the more sensible decision. Maybe, it takes a nation that doesn’t value salmon and chicken breast to get Sicilian chefs to do over here as they do at home. Maybe, they’re here because they just couldn’t cut it back home. Whatever it is, La Scogliera just couldn’t satisfy the need that their own home country has repeatedly and also consistently created.