A Malta-based multimillionaire has said he will donate $1 for every comment he receives on an Instagram post about the environment, up to a maximum of $1 million.

Erik Bergman said all money raised would go to the Coalition for Rainforest Nations.

The coalition is an intergovernmental organisation which seek to work together to reconcile forest stewardship with economic development.

Mr Bergman told Times of Malta he was inspired to create the initiative after seeing climate change activist Greta Thunberg speak to delegates at the United Nations General Assembly.

"When I saw the UN speech by Greta Thunberg, I felt that, ‘I can do things now, what am I waiting for?’ So, I decided to get started," he said.

Ms Thunberg, 16, accused world leaders of betraying her generation in a fiery speech in New York this week.

Mr Bergman started his Instagram fundraising campaign on Friday and will run it until October 3, when he will make the final donation to Coalition for Rainforest Nations.

“I’ve donated $1000 so far to prove that I’m actually going to do it. I’m aiming to reach $1 million in total donations.”

Mr Bergman told Times of Malta he chose this particular charity because according to him it is “the most efficient” at tackling pressing climate issues, basing his decision on researchers he trusts.

“I believe that the only way to keep our rainforests are to make them more valuable standing up [than burnt down]. At the moment farmers make more money if they burn the forest to grow crops.

“Coalition for Rainforest Nations are doing lots of initiatives to turn this around by creating big collaborations between rainforest nations and rich western world nations.” 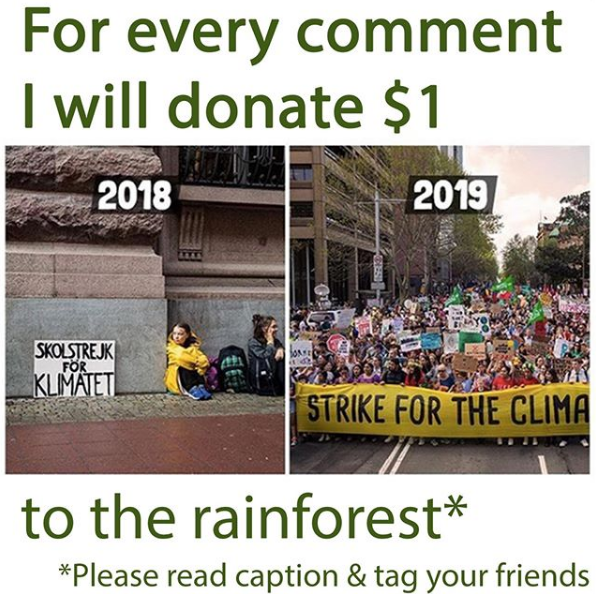 “It’s very likely that I will do similar things in the future,” he said talking about his latest initiative.

“I believe the easiest way to make a difference actually is to donate money. We need to limit our emissions by making other life choices as well, but to make a bigger impact I think donations are more powerful," he said.

"According to research a donation of only $10 to Coalition for Rainforest Nations is enough to offset one year of the average emissions of a Maltese resident. That equates to 10 tons of carbon dioxide.”

Mr Bergman has written a blog post explaining his idea in more detail.

To donate to Coalition for Rainforest Nations, visit www.rainforestcoalition.org/donations/