No representation of nature in all its infinite variety of form and mood, whether landscape painting or poetic description or photographic record of the open countryside, exists without a hidden hint of the myth of the pastoral ideal.

Of the earliest poets in antiquity, Virgil was the ultimate inspiration of landscape and of man’s deep-rooted nostalgia for Arcadian bliss, an idyllic natural backdrop and primitive state of quiet and contentment. His elegant sketches of scenery in the Aeneid have been sedimented in the collective memo­ry across the centuries. 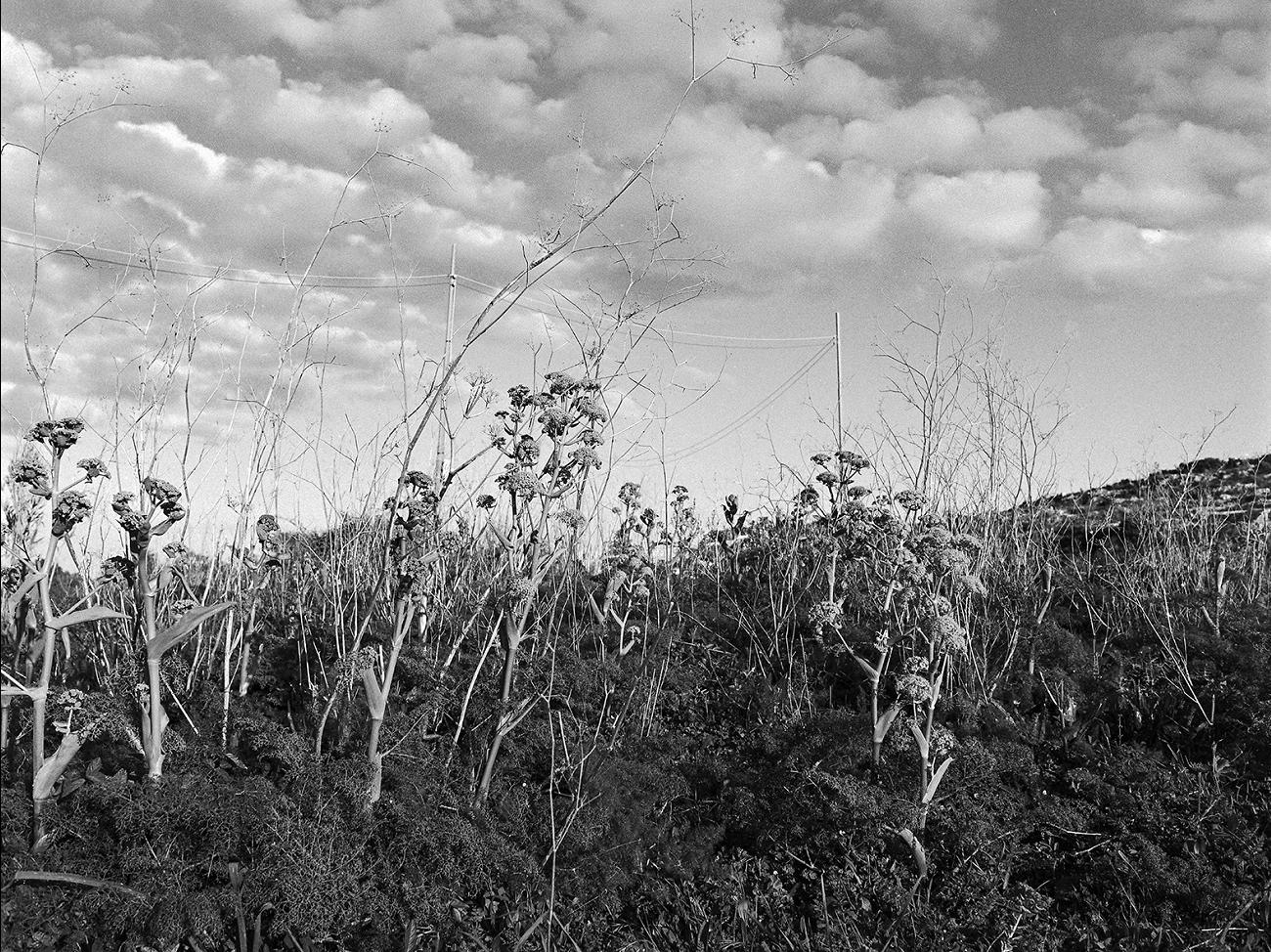 The central text in the Roman education system since Augustus, it was studied, memorised and its exquisite phrasing scratched on the walls of Pompei. It sowed the seed of a universal yearning for the most enchanting dream that has ever given solace to mankind: the myth of a Golden Age in which man lived on the fruits of the earth, peacefully, piously and in primitive harmony with nature.

Hard as I try to avoid this classical vision when I enter into the sphere of Inigo Taylor’s latest photographical work, my mind returns to this other world with its Virgilian landscape and fullness of life. It is not really there in front of me, loud and clear, but I sense in his photographs a hankering hunger for an age of innocence that is all but left behind. 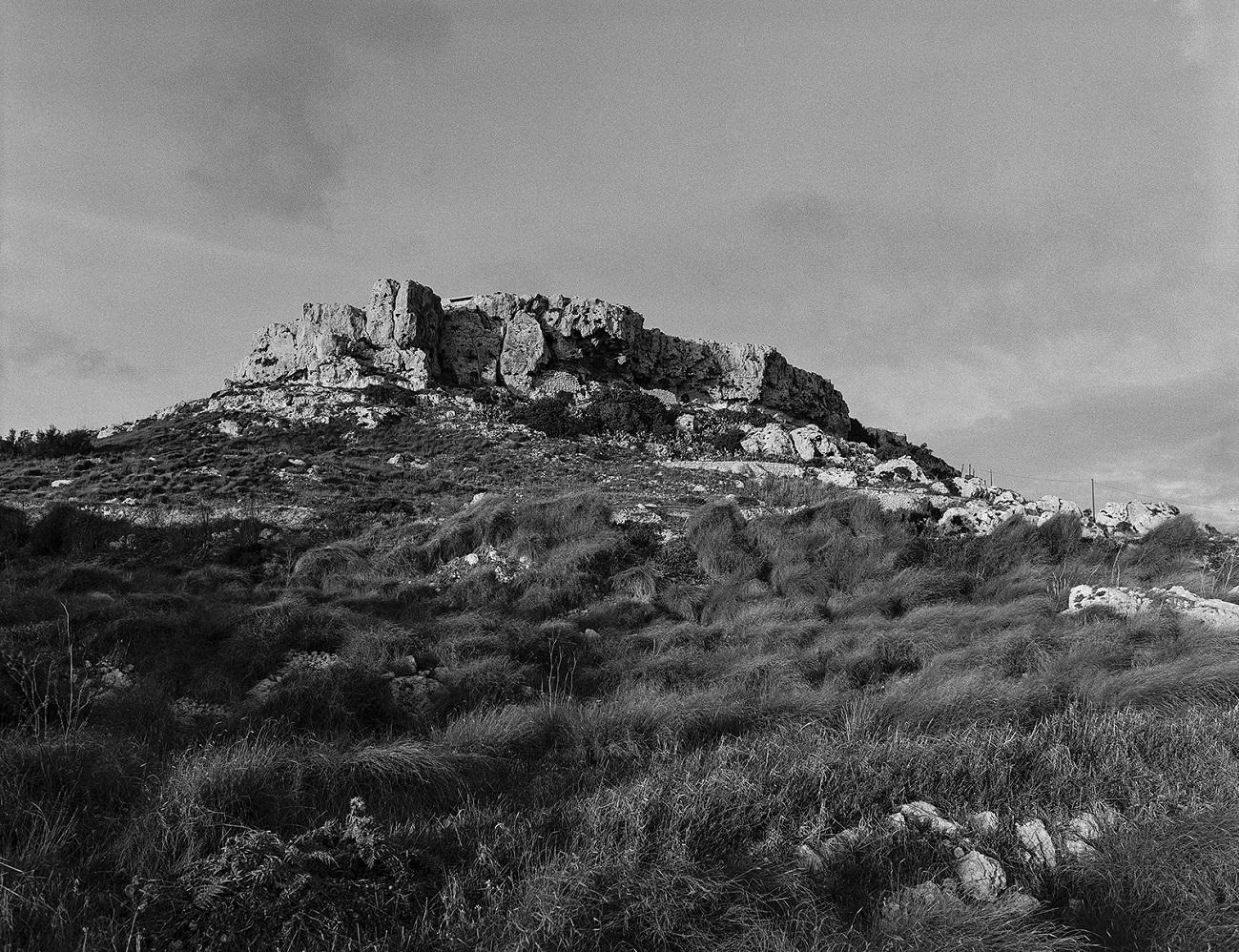 There is a frustration in what I see, an almost desperate need to capture the last vestiges of a virgin landscape that is vulnerable and has fallen victim to the cruel and careless exploitation of the local inhabitants. This is a landscape that is on its knees, he seems to say, but although it is ravished, it continues to be generous and kind and to provide us with delight.

No stern warning is contained, on the other hand, in these images, no moral high ground or timely reminder of how things could be.

Yet these photos, taken in the current times of intense materialism, convey a sense of latent tragedy. This is all the more poignant that the underlying catastrophe is not conveyed by the presence of burgeoning building sites, cocked crane structures breaking the horizon or clunking machinery gnawing at the green verges, nor is it symbolised by dark clouds bursting with rain or a storm brewing beyond the outlying boulders. 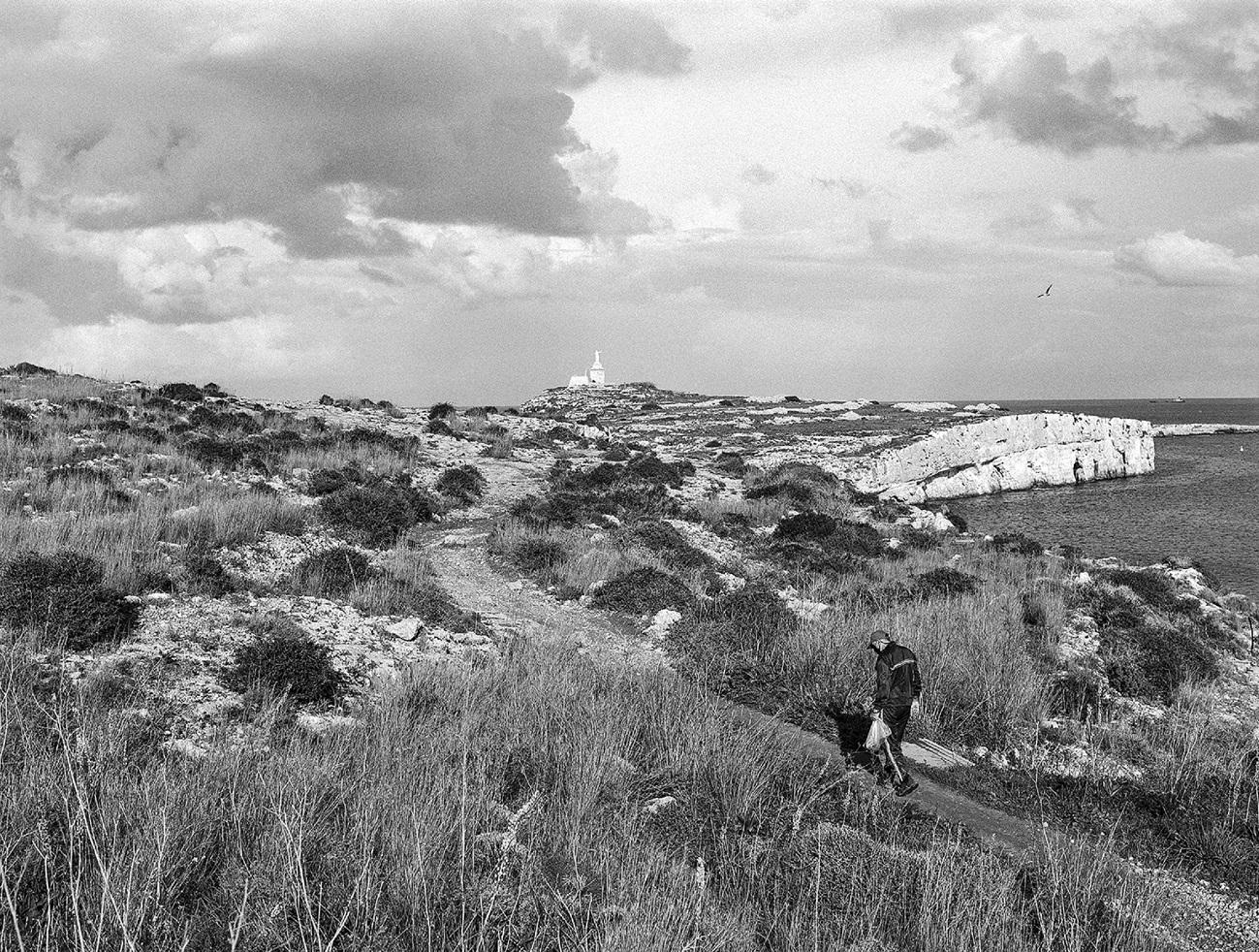 On the contrary, these landscapes are bathed in the bright haze of a blazing summer afternoon or saturated with a springtime serenity. Traces of the passage of man are there, in the form of tyre marks or signage, but the pictures are mostly void of his physical presence. This makes them all the more powerful and fragile at the same time.

There is only one charming detail in the collection of images of the Maltese countryside that undisputedly foreshadows an imminent measure of change. 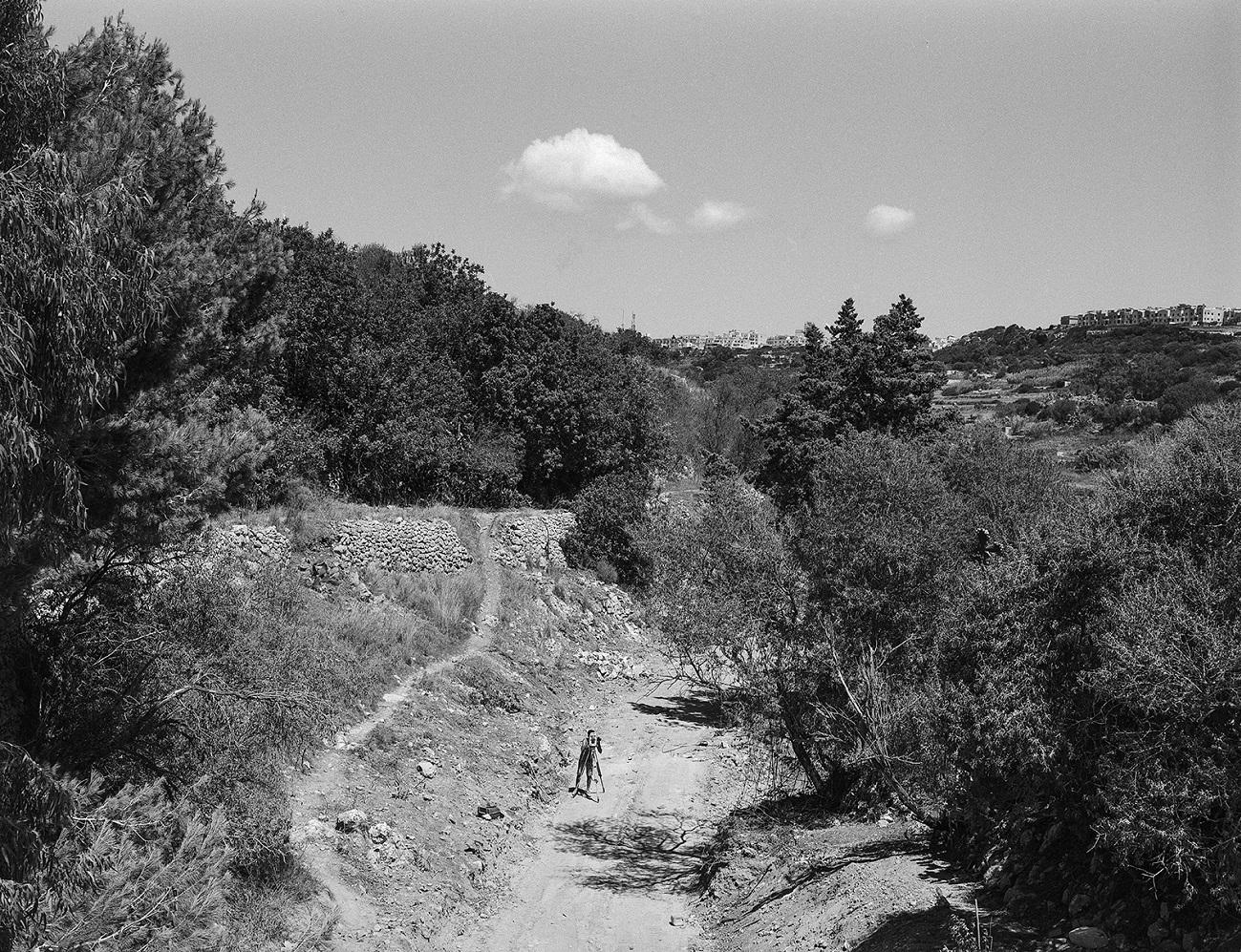 In a photograph that captures a sunny day at Wied il-Qlejja, a solitary surveyor works with his theodolite, pointing his instrument at the valley, a somewhat foreboding augury of darker things to come, while the photographer, in turn, points his lens at the tiny earthling in the distance. There is no judgement in this backward glance of the observer. Quite the opposite; the remote view, caught from an elevated vantage point on Mosta Bridge, has the quality of God’s eye in the sky, far above, affectionate and forgiving. All this surrounding natural beauty is a gift for man to enjoy but can he be trusted?

“The photos in this collection are containers of the enormous respect the photographer has for the landscape they depict; reverence even”

One of the most admirable qualities of these photographs is their spontaneity. We may be surprised by the apparent arbitrariness of what is represented here, as though the artist just fixed what was in front of him as he sat down for lunch or for a rest on the way to somewhere else.

Yet, these records of real places and actual moments contain visual information that is pure, charming, humourous at times and always far reaching.

The inspiration is the work of Robert Adams and the exhibition held in New York in 1975, entitled New Topographics: Photographs of a Man-Altered Landscape. It continues to be faithful to Goethe’s statement: “I shall never rest until I know that all my ideas are derived, not from hearsay or tradition, but from my real living contact with the things themselves.”

Still, for all its stylistic anonymity and lack of artistic frills, its eschewing of classical norms of beauty and composition, I couldn’t help but make connections between Taylor’s work and other well-known cult paintings in the history of western art. The little man collecting snails on the foreground of a magnificent cliff-edged, shrub-lined seascape reminded me of Brueghel’s narrative in the Fall of Icarus, contrasting the cyclical nature of the seasons and the linear trajectory of man’s hubristic ambitions. 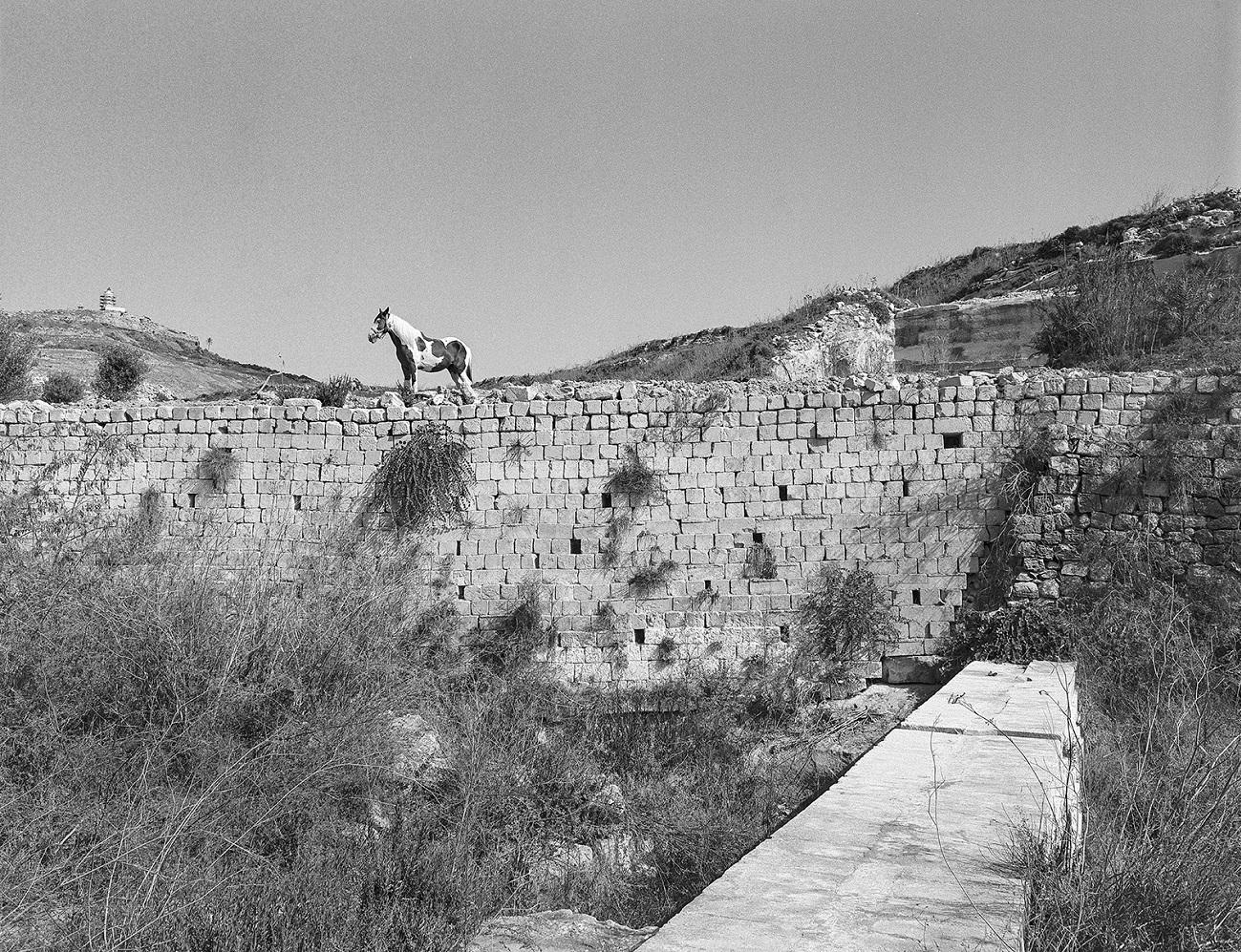 In another photograph, taken at midday in the height of summer in Wied il-Mielaħ, a perceptive play of perspective places a random horse placidly and precariously atop a drystone wall, a superimposition reminiscent of Giulio Romano’s mannerist horses painted above the doors of Palazzo Del Te in Mantua.

Primarily, the photos in this collection are containers of the enormous respect the photographer has for the landscape they depict; reverence even. But this is not fortuitous.

These images were created while Taylor was expecting to become a father. The valleys that he captures are symbols of the returning seasons, of the cycle of life and, in particular, of the moment when, as with the onset of spring, life begins to stir in the bosom of the earth, bringing with it a promise of the future. It is not a coincidence that all his photographs are bathed in a serene light. 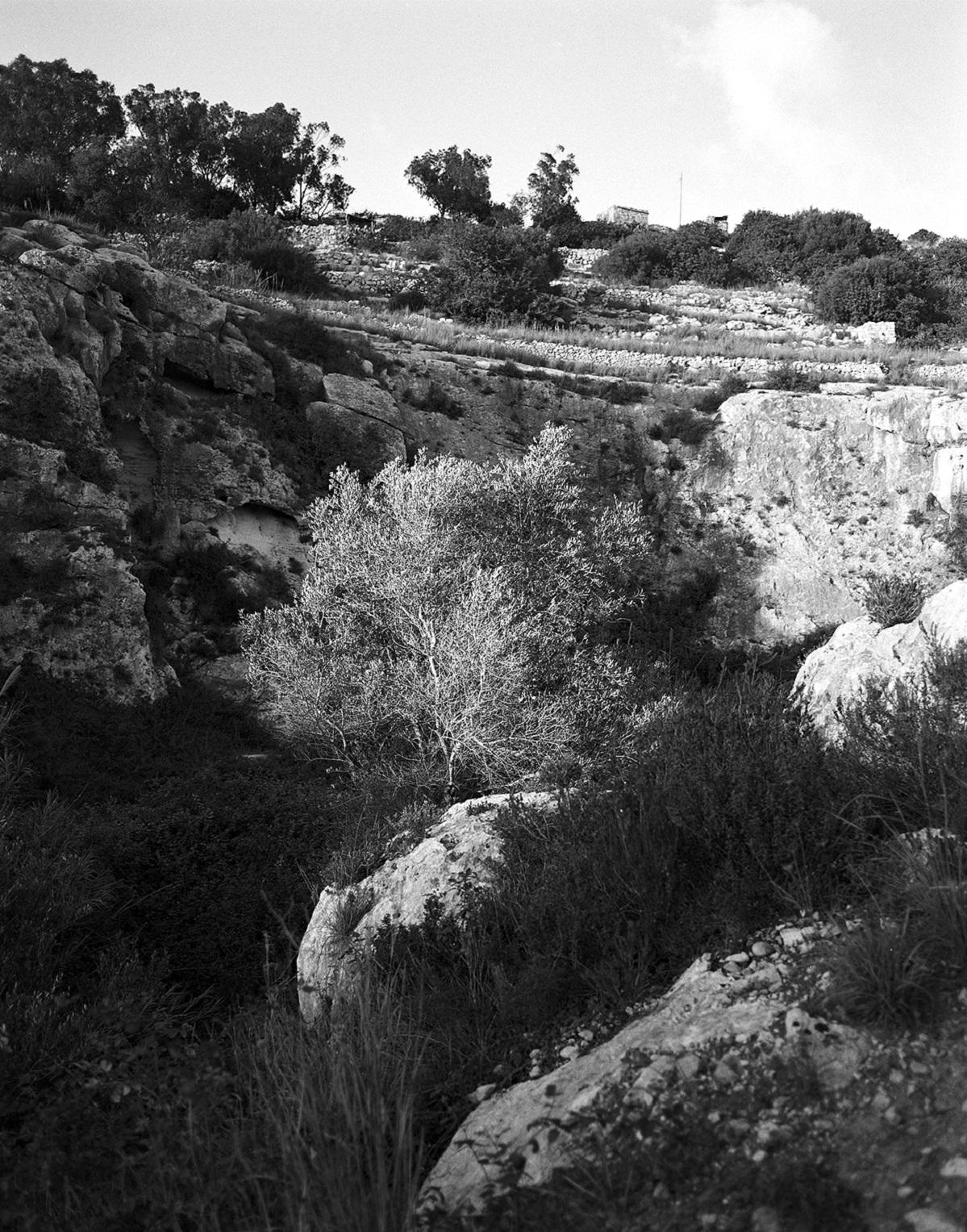 In spite of the disruptive and clumsy intervention of man, they promise that redemption is still possible. For if the work of Virgil and the poets of antiquity were already harking back to a Golden Age, isn’t it possible that nature will continue to construe a way to re-establish a balance between nature and man’s interventions that is everlasting?