Malta has been pinpointed as being at the centre of illicit smuggling across the Mediterranean by an international police investigation led by Italy’s Guardia di Finanza, according to a report by Daphne Project partners La Repubblica.

Colonel Giuseppe Campobasso, who heads the anti-drug law enforcement for Italy’s financial police in Palermo, has said “Malta has become a crossroad of illegal trafficking”.

A particular wharf in the far end of the Grand Harbour, Il-Moll tal-Pont, was described as "a thread through the tapestry" of illegal trafficking activities in the Mediterranean, spreading from Morocco to Cyprus.

According to the investigations, it was at this wharf that the M/Y Quest – a 42 metre ship – was overhauled last spring and painted in fresh colours. After a few weeks it was impounded by the Italian police off the Tunisian coast with 10 tonnes of hashish on board.

The arrested crew told a court in Catania that they always followed orders from the Maltese owners.

Two other major illicit trafficking busts connected to Malta and many of the same people are also included in the investigation.

READ: How diesel smugglers got away with it for years

In August 2015, fuel tanker Sovereign M was impounded by the Libyan authorities with a load of smuggled diesel. The ship owners, Sovereign Fuels Ltd, is registered to a Maltese man, Silvio Mizzi. The shipper was Paul Attard of the Patron Group Ltd, according to a document found on board the ship.

In June of last year, Mr Attard’s cargo ship Med Patron, sailed from Bar, Montenegro and met up with two other ships - Eisvogel chartered by Mr Attard and Falkvagg, represented by Mr Attard, on the Hurds Bank – some 10 nautical miles east of Malta.

During a ship-to-ship operation, 6,000 boxes of cigarettes were transferred from the Med Patron to Falkvagg.

Eisvogel then towed the Falkvagg to Spanish territorial waters, where it was busted by the police. The illegal cigarettes together with the ship were impounded.

Mr Attard denies owning Med Patron, even though the shipping register names the Patron Group as the ship's owner since 2014.

Although all these international busts had Maltese links, either through individuals and companies operating from the island, successful anti-illegal trafficking operations were all carried by police officers of other countries.

La Repubblica names Paul Attard of the Patron Group, his uncle Captain David Bonello,  Joseph Anthony O’Connor, an Irishman living in Malta for many years, and gold trader Silvio Mizzi as all being "connected" to the cases uncovered by the international police operation.

They all denied any association when approached by the Italian journalists.

Malta’s name in the illicit smuggling multi-million trade has been making the headlines for many years. Only last year, Libya's Attorney General Sadiq Al-Sour stated that smuggling of Libyan fuels "by the Maltese Mafia" was happening on a daily basis.

In October 2017, two Maltese businessmen, Gordon and Darren Debono (unrelated) were arrested in Lampedusa and Catania in connection with a multi-million operation of illegal fuel smuggling from Libya to other parts of Europe through Malta.

Both are still under arrest.

The Daphne Project is an investigation by more than 18 international media organisations dedicated to continuing the work of Ms Caruana Galizia. They include top-flight newspapers The New York Times, The Guardian, La Repubblica, Le Monde and Süddeutsche Zeitung. Malta is represented by the Times of Malta. 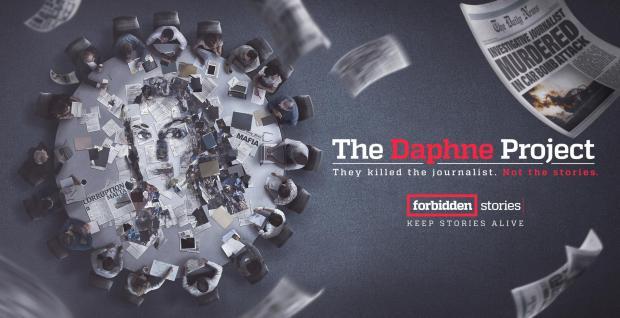