Malta continues to have the largest gender employment gap across EU member states, despite progress in encouraging more women to enter the workforce.

New figures released by Eurostat today showed that while Malta has one of the EU's best male employment rates, with 83.1 per cent of men aged between 20 and 64 in work, just 55.5 per cent of women within that age range are employed.

Malta can take comfort from the fact that although its gender employment gap is worse than that of its two aforementioned Mediterranean neighbours, that is only the case because of the high percentage of local men in work, with both Italy and Greece registering lower employment rates than Malta for both genders.

Also encouraging is that Malta is now just 0.4 percentage points from reaching Europe 2020 employment targets - something a quarter of all member states have achieved.

Malta's 2020 target is to have 70 per cent of its working age workforce in employment by that date.

The employment rate represents employed persons as a percentage of the population in the same age group. 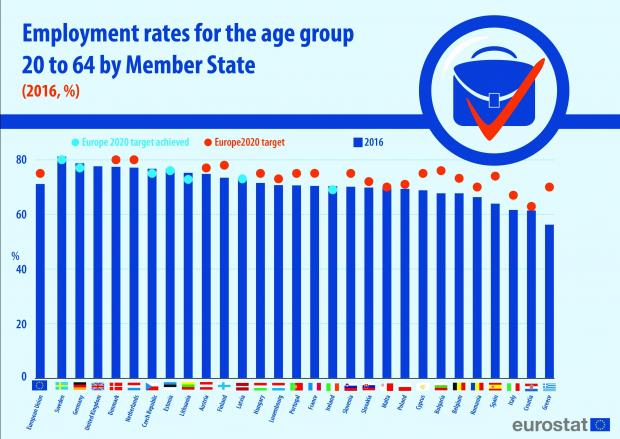 Malta is closing in on its Europe 2020 employment target. Graph: Eurostat

There is no EU member state which has a larger percentage of working age women in employment than men.

Employment rate of those aged 55 to 64

Malta's 44 per cent overall rate remains on the lower end of the EU spectrum, with just five member states faring worse. Fifteen member states have more than half their population aged 55 to 64 in employment, with Sweden (75.5 per cent), Germany (68.6 per cent) and Denmark (67.8 per cent) having the highest rates.