Malta leads the EU in having the highest overweight and obesity rates, according to a new World Health Organisation report.

It also ranks third in the whole of Europe, after Andorra and Turkey, confirming previous studies that Malta tips the weighing scales beyond the healthy levels.

The WHO said premature death, obesity, tobacco use and alcohol consumption “remain alarmingly high” in Europe.

Europe has the world’s highest rates of drinking and smoking. Also, more than half its people are considered as "too fat".

Just under 60 per cent of people in Europe are either overweight or obese and 30 per cent use tobacco.

Some 11 litres of pure alcohol is drunk per person per year. This puts them at high risk of heart disease, cancer and other deadly illnesses.

The WHO warned the situation could have the most serious impact on young people since their lives could be shortened unless something was done to reduce the consumption of tobacco, alcohol and calories.

The report shows an increase in the prevalence of overweight and obese people between 2010 and 2014 in almost all European countries.

It notes there were substantial improvements in the case of death from external causes, such as road traffic accidents and suicides, over the last report three years ago. 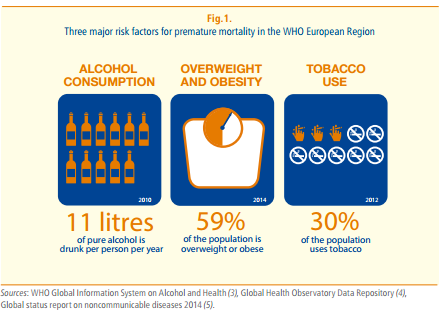