Malta has risen to 37th place in the Corruption Perception Index by Transparency International, gaining one point from the 2014 survey.

Denmark leads the list of 168 countries. Somalia is last. 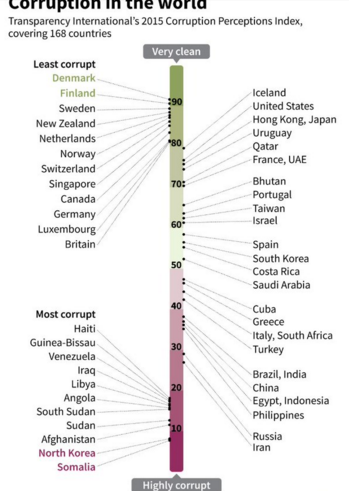 Scant details about Malta are given in the report where countries and territories’score indicates the perceived level of public sector corruption on a scale of 0 (highly corrupt) to 100 (very clean).

Malta has 56 points and his behind most EU countries except Italy, Hungary, Croatia, Latvia, Greece, Bulgaria, Slovakia and Romania.

Two thirds of the 168 countries assessed scored below the 50 mark in TI's scale where 100 stands for the most clean and 0 for the most corrupt, indicating that corruption continues to take a heavy toll on the global economy and governance.

On a brighter note, however, the survey showed general perceptions of corruption around the world had declined in 2015.

Among countries which saw an improved ranking were Greece, Senegal and Britain.

TI attributed the overall global improvement to the work of citizen activists fighting corruption in places such as Guatemala, Sri Lanka and Ghana - all countries which were able to improve their ratings in 2015.

"Corruption can be beaten if we work together," said TI chairman Jose Ugaz in a statement. "To stamp out the abuse of power, bribery and shed light on secret deals, citizens must together tell their governments they have had enough."