At 61, Kevin Hodkins considers himself lucky to be alive after being pinned to a wall by a motorist who clipped his rear wheel while cycling in Selmun on a Sunday morning.

The British expat from Mellieħa ended up in hospital with a broken collar bone after he was flung 20 metres away from his bike on November 15, but police are questioning his version of events and challenging the “rules of physics”.

“You must have hit the wall,” the police kept insisting when he filed a report. 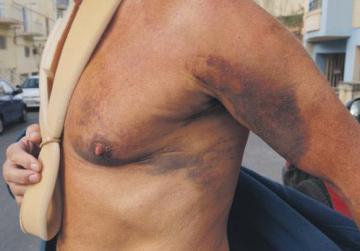 The bruising to his body.

The retired British engineer, who settled in Malta several years ago, contacted this newspaper expressing his bafflement at the seemingly light manner in which authorities were dismissing incidents involving cyclists. This was his fourth accident in just six years, including a case of hit-and-run in Ċirkewwa.

“I don’t know if the laws of physics regarding kinetic and potential energy differ in Malta to the rest of the planet, but if I had hit the wall how did my bike end up undamaged in the middle of the road?” he asked incredulously. “Apparently it is not worth taking legal action as the case will be thrown out of court,” Mr Hodkins added.

If I had hit the wall how did my bike end up undamaged in the middle of the road?

The frustration stems from repeated disregard. Earlier this month cyclists were left fuming by a court ruling which acquitted a water bowser driver of seriously injuring a cyclist, in spite of the fact that two police officers happened to be on the spot at the time of the incident three years ago. As in the case of Mr Hodkins, the cyclist was allegedly hit by the heavy vehicle, this time while going up the hill towards Mosta in Triq Burmarrad in a section of the road which narrowed down from two lanes to a single carriageway. The cyclist ended up with spine fractures while his bike was damaged to the tune of €2,500. The court said the police had failed to produce enough evidence to corroborate the charges, noting that none of them had actually seen the cyclist being hit by the heavy vehicle, as the bowser was obstructing their view.

The court also noted that no signs of impact were found either on the bowser or on the right-hand side of the bicycle’s handlebar.

In a comment to the Times of Malta, Bicycle Advocacy Group spokesman Jim Wightman described the decision as “a miscarriage of justice” while asking if the case could be heard before another court.

Others vented their anger at this “incredible” ruling, saying that authorities were seemingly giving the benefit of the doubt to motorists.

For his part Mr Hodkins just counts himself just lucky to be alive.

Meanwhile, a today cyclist uploaded on Youtube his views on the newly revamped Coast Road, expressing his disappointment over the inconsistent bike lane. See below.