Malta has repeatedly delayed the rescue of migrants at sea, “needlessly endangering hundreds of lives”, according to the operators of an emergency rescue hotline.

In a bi-monthly report on migrant crossings covering the months of September and October, NGO Alarm Phone said delays to rescue missions, particularly by Maltese authorities, were continuing despite warnings of the risk to human life.

Alarm Phone, a volunteer group that helps those in trouble at sea find the nearest coast guard, also highlighted “forced interceptions” of migrants at sea which resulted in their return to their initial ports of departure.

This week The Sunday Times of Malta reported on a secretly negotiated agreement between Malta and Libya that sees the Armed Forces coordinate with the Libyan coast guard to intercept migrants headed towards the island and returned to the war-torn North African country.

The agreement for “mutual cooperation” was struck between members of the AFM and the Libyan coast guard, with government official Neville Gafà acting as an intermediary.

The NGO’s report shines a rare spotlight on how Libyan interceptions of migrants at sea play out.

On September 27, the report reads,  a distress call and GPS coordinates from a group of approximately 50 to 70 migrant travellers, including women and children, who had left from Misrata, Libya, was received.

The boat’s engine had stopped working and they were drifting at around 70 km off the Libyan shore in the dark.

Although Maltese, Italian, and Libyan authorities were all informed, the NGO kept in regular contact with the migrants for a further two nights.

“While a rescue did not take place, the people were running out of drinking water, there were injuries, people fell unconscious and water started entering the boat. Only in the morning of September 29 (two days after the distress call) did we receive confirmation that the group had been brought back to Misrata by the so-called Libyan Coastguard with 2 people in a critical state of health,” the report reads. 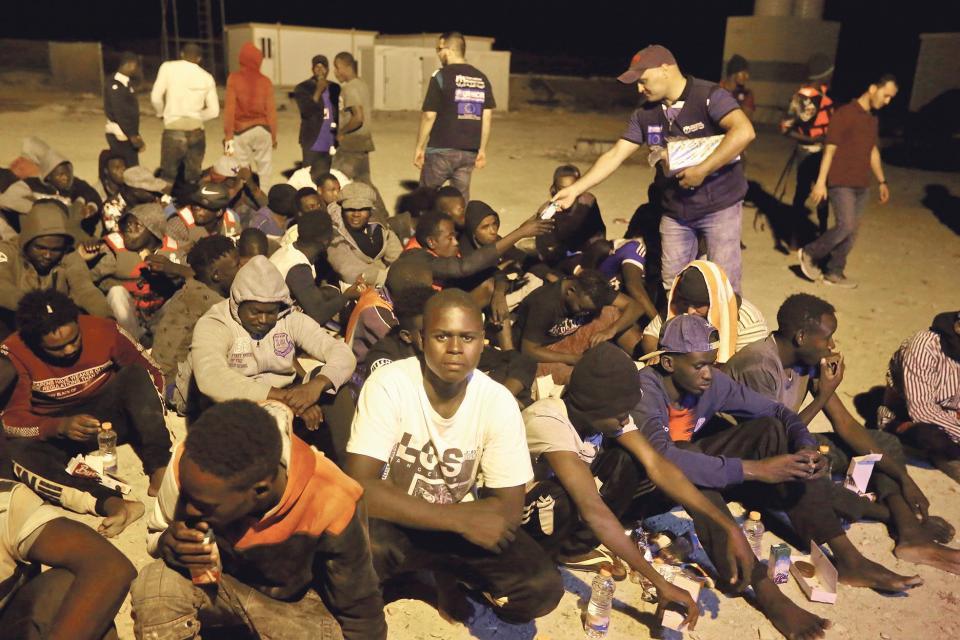 Libya is not considered a safe port by the United Nations and detention camps there have regularly been linked to severe human rights breaches. Picture shows rescued African migrants in the Libyan town of Khoms. Photo: AFP

Meanwhile, in the two months covered in its report, Alarm Phone said it had engaged in 99 distress cases in the Mediterranean, involving some 3,580 migrant travellers.

Approximately 985 people did not reach Europe as they were returned to their places of departure – predominantly Libya.

About 2,360 people reached Europe in Italy, Malta, Greece or Spain. The fate of over 200 people remains unknown.

“Over the past eight weeks, we have once more documented grave human rights violations at sea. Mass interception campaigns continue in the Aegean, the western Mediterranean and the central Mediterranean seas that lead to the forced return of tens of thousands of people trying to escape,” the NGO said.

The operation, which reportedly occurred last month, has been flagged by Vincent Cochetel, the UNHCR’s special envoy for the Central Mediterranean, who believes the case could have constituted a violation of maritime law.

Home Affairs Minister Michael Farrugia, however, has said that the migrant vessel was “on the high seas” and not in Maltese territorial waters.

“Some [migrants] are even intercepted from within European Search and Rescue (SAR) zones, as was the case on October 18 when 50 people were captured and abducted by the so-called Libyan coastguards within the Maltese SAR zone,” Alarm Phone warned.

The report says that of 28 boats (carrying 1,729 people) in distress in the Central Mediterranean between September and October, five boats with about 418 people on board were intercepted and returned the North African state.

The fate of three boats with about 233 people on board remained “unclear”, the NGO said.

Meanwhile, the report also detailed how attacks on migrant boats and rescuers were becoming increasingly commonplace in the Mediterranean.

On October 26 migrants and the crew of NGO rescue vessel Alan Kurdi were victims of violence by gun-wielding Libyan militia.