Updated at 3.27pm with Opposition statement

Malta has failed an expert review of its money-laundering regime, with a Council of Europe body (Moneyval) expressing concerns that law enforcement authorities are not in a position to effectively do their jobs.

Fundamental improvements are also needed with regard to confiscating the proceeds of crime from money laundering.

Times of Malta first broke the news about the failed assessment in March but the report was officially released on Thursday morning.

Malta now has one-year to address the concerns raised by Moneyval, or face a blacklisting.

In a statement, the government said it welcomed Moneyval's findings and was committed to implementing the report's recommendations.

A comprehensive 200-page report gives a detailed breakdown of the country’s failures to fight financial crime.

Malta scored poorly in most of the categories analysed by Moneyval

It identifies the police as one of the key weaknesses in the investigation and prosecution process.

Moneyval says the Financial Intelligence Analysis Unit (FIAU) is considered to be an important source of financial intelligence for the police in Malta for pursuing investigations and prosecutions of money laundering and terrorism financing offences.

However, only in a limited number of cases are the FIAU dissemination used to develop evidence and trace criminal proceeds related to money laundering.

Times of Malta has reported in the past how several FIAU reports on top government officials, including the Prime Minister chief of staff Keith Schembri and Tourism Minister Konrad Mizzi, were not acted upon by the police.

Last year, Economic Crimes Unit chief Ian Abdilla refused to account for the lack of action taken by the police on the Konrad Mizzi report.

Moneyval says the authorities focus primarily on tax collection, rather than conducting criminal investigations on tax-related matters and parallel financial investigations exclude the money-laundering elements of such cases.

This raises concerns on the adequacy of the measures applied by the competent authorities in the light of the national risk assessment conclusions about tax evasion being one of the highest threats in the country.

While Malta has a sound legal framework to fight the financing of terrorism, the report notes that is not resulting in prosecutions or convictions.

While noting recent progress, the report concludes that the actions undertaken by the authorities are not fully in line with the country’s exposure to possible terrorism financing risks.

Malta is lacking an in-depth analysis of how all types of legal persons and legal arrangements can be misused for money laundering and financing of terrorism purposes. 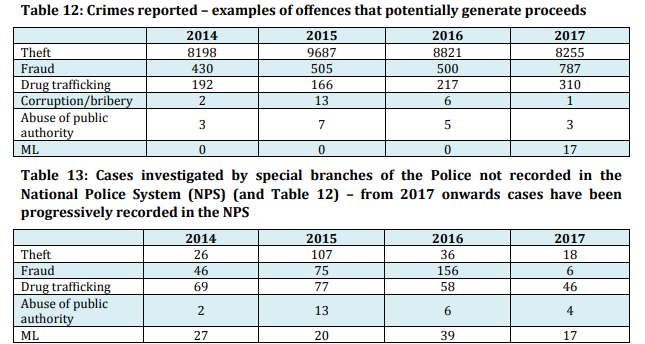 The report found shortcomings in a multi-pronged approach to obtaining beneficial ownership information.

Considering the nature and scale of business undertaken in Malta, the fines for failing to submit beneficial ownership information on legal persons are not effective, dissuasive and proportionate.

Finally, the report notes that Maltese legislation sets out a comprehensive framework for international co-operation, which enables the authorities to provide assistance with a general positive feedback.

In a statement signed by Finance, Justice, Home Affairs and Financial services secretariat, the government committed to acting on Moneyval's findings.

"Together with other stakeholders and competent authorities in Malta, we are satisfied with the progress achieved on the multi-year Strategic Action Plan laid out by Malta’s National Coordinating Committee (NCC)", the statement said.

The NCC was established in April 2018 to implement a national strategy against money laundering and the funding of terrorism.

A one-year action plan will be drawn up by the NCC in collaboration with 20 other Maltese institutions, in order to implement the fifty-eight Moneyval recommendations. 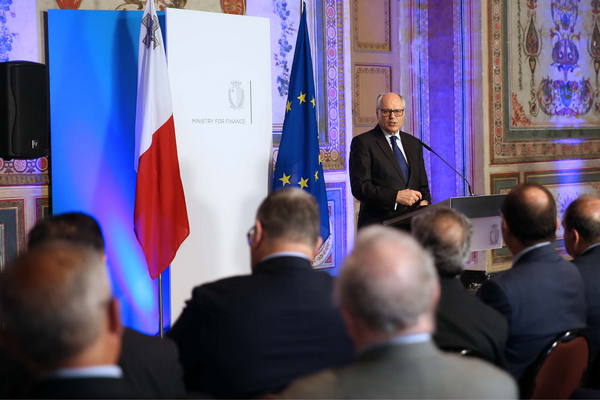 Finance Minister Edward Scicluna speaking during the launch of the NCC last April.

Each Moneyval recommendation will be entrusted to a competent institution, with a proposed set of actions in respect of each recommendation, a time frame for implementation, the resource requirements, including support and expertise, and, where required, an appointed project leader, the government said.

The government pointed towards recent findings carried out by the Basel Institute for Governance, which classify Malta as a low-risk jurisdiction for money laundering and terrorist financing.

Malta's own national risk assessment, drawn up by the government, classifies Malta as a high-risk jurisdiction for money laundering.

In a reaction, the Nationalist Party said the government had placed the financial services sector, which provides jobs to thousands of professionals and young people, at risk by weakening the country’s institutions.

The government had been warned about when Moneyval was coming to prepare its report, but it did very little to address the serious problems relating to the enforcement of money laundering legislation.

The report highlighted the government's lack of enthusiasm to bring investigations on high profile corruption and money laundering cases to a conclusion.

The Opposition said it would continue to insist with the government that all the necessary resources were made available for such cases to be investigated effectively in the shortest time possible.

It said people implicated in such investigations who held positions of power within the government should resign from any public post.

The government should show clearly and immediately that it was treating this matter with the seriousness it deserved rather, the PN said.