Malta’s population growth in the past decade has outpaced that of all other countries in the EU, an analysis of data following the latest census shows.

A preliminary report on the 2021 population and housing census, published Monday, showed Malta’s population grew from 417,432 in 2011 to 519,562 just 10 years later. Described by the National Statistics Office as “unprecedented”, the growth translated to an increase of almost 25 per cent. 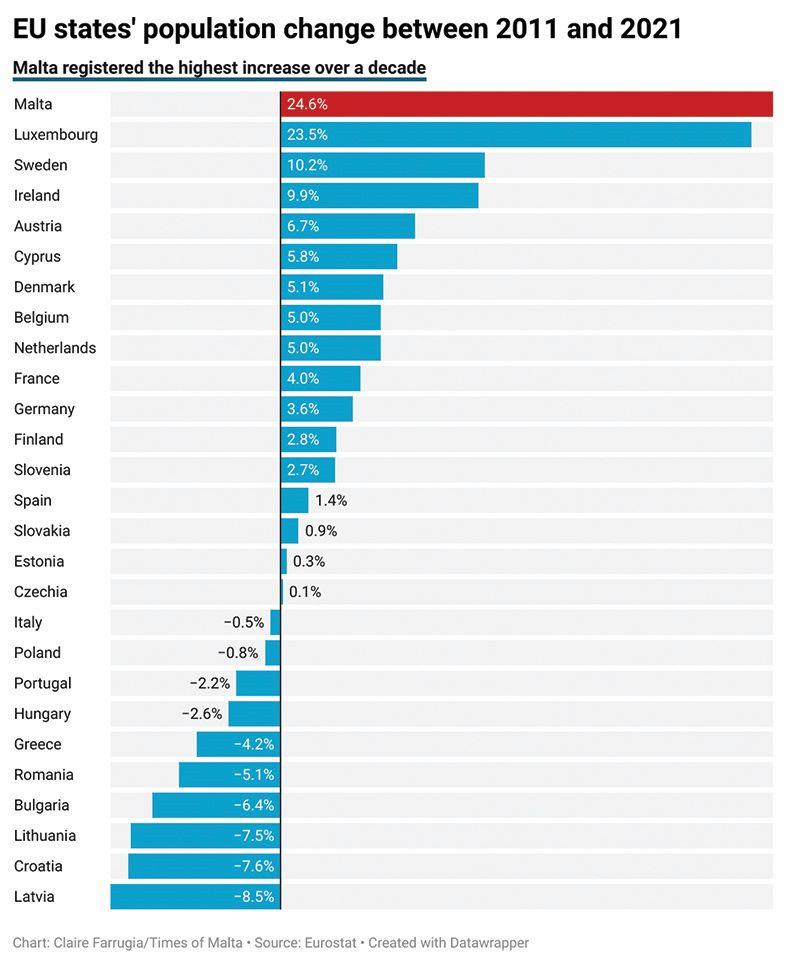 The third-highest increase was registered in Sweden, although the population there increased by a fraction of Malta’s rate, going up by just over 10 per cent in a decade.

Meanwhile, more than a third of EU member states registered a drop in population numbers in the same period. With a decrease of 8.5 per cent, Latvia had the sharpest drop.

Contacted for a comment following the census’ publication, economist Marie Briguglio said that despite the decision to “actively encourage immigration” there had never been any consultation on the issue.

“I do not recall that this policy proposal was ever put up for public consultation, even though it is arguably one of the most important directions ever to be taken in recent history – with massive economic, social and environmental implications – both positive and negative,” Briguglio said. Asked about the potential benefits of the type of population growth Malta has experienced, Briguglio said this includes lifting some of the constraints of a small workforce and also increasing diversity in society.

But the economist also pointed to a number of issues that are likely to arise as a result of such growth. These include the increase in population density, infrastructural and institutional strain as well as an impact on the environment.

According to the census, Malta not only retained its place as the most densely populated EU member state, but the population density continued to increase as a result of the population growth.