Dr Galdes, who was addressing an anti-money laundering conference organised by the Malta Institute of Accountants, said sending people to prison was not enough.

More had to be done to trace and seize criminal assets, to put the criminals out of business.

The former FIAU investigator, who resigned in 2016 after the FIAU started investigating the Prime Minister’s chief of staff and Tourism Minister Konrad Mizzi, said other countries had honed down asset tracing to a science.

In Malta, asset tracing merely involved sending a notification to all subject persons (banks and other financial institutions), asking for a list of a person’s assets.

“The last thing a criminal would do is deposit the proceeds of crime in an HSBC account,” Dr Galdes said.

He cited the example of an Identity Malta employee who was charged with embezzling funds from the agency.

Dr Galdes said it took 21 days for the investigation order into the employee to be published.

This gave him enough time to withdraw €40,000 from his account in the interim, Dr Galdes said.

He argued that money laundering should be investigated on its own merits, and not as part of an investigation into drug or human trafficking.

MEP report did not do Malta much good

On the upcoming assessment by the Committee of Experts on the Evaluation of Anti-Money Laundering Measures and the Financing of Terrorism (Moneyval), Dr Galdes said there were a number of areas of concern.

Read: Malta ready to close any money-laundering gaps if any found

He noted that the report prepared by MEPs about the rule of law in Malta had not done the island much good, as Moneyval would look into it as part of their preparations for the visit.

Watch: MEPs pass resolution on rule of law in Malta with large majority

Dr Galdes said the extent of anti-money laundering supervision was still relatively low in proportion to the financial sector’s side.

The number of on-site compliance visits was also low, and standards varied between the different supervisors (FIAU, MGA and MFSA).

He said the accountancy board should be more involved in helping the FIAU when it came to accountants and auditors who were not complying with the law.

One of the biggest issues was that the type of money laundering prosecutions was not in line with Malta’s profile as a financial services sector, he said.

He said Moneyval would be looking into the application of anti-money laundering laws, rather than just assessing if the necessary laws were in place.

Asset Recovery Bureau laws not yet in force

Dr Galdes recalled how, in 2015, the government has set up an Asset Recovery Bureau.

He said that despite the laws setting up the bureau being in place, many of the provisions governing it were not.

Dr Galdes said there were no tangible results to show Moneyval vis-à-vis the bureau as it was not yet operational, despite having “all the time in the world” to do it.

He said these problems had not come about overnight, as legacy issues over the last 20 years had not been addressed.

Dr Galdes said the problem was that when someone had come up with a solution, such as the Asset Recovery Bureau, it took too long for it to be brought into effect.

Malta’s Asset Recovery Bureau was modelled on the Irish one, which was set up in 1996 after a journalist was murdered while driving her car.

As a result of the assassination, a number of measures had been introduced, one of which was asset recovery legislation, he said.

This gave powers to entities to seize assets when someone could not prove where their wealth came from.

He said Malta was not the only laggard in this respect, as the UK had only this year introduced similar laws.

‘Police do not pick and choose which FIAU reports to investigate’ 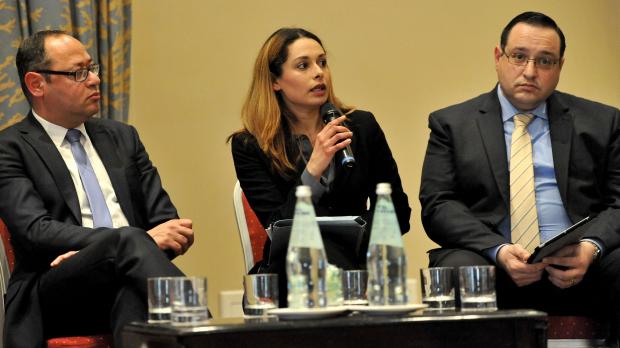 During a panel discussion later, senior FIAU analyst Ruth Gauci said suspicious transaction reports (STR) were usually only filed with the FIAU after public information, such as a person’s arrest, emerged.

Replying to a question about the real estate sector, Dr Galdes, who was also on the panel, said the FIAU did not need an STR to investigate an issue.

The same applied to the police, who could investigate on their own initiative without an FIAU report being needed to trigger action.

In reply to a question by the Times of Malta, Economic Crimes chief Ian Abdilla insisted the police did not pick and choose which reports to investigate.

The police received two reports from the FIAU about suspected money laundering by the Prime Minister’s chief of staff Keith Schembri, but no action was ever taken against Mr Schembri.

Police Commissioner Lawrence Cutajar has in the past said there was no reasonable suspicion to investigate Mr Schembri or Dr Mizzi.