Malta ranks as one of the most ‘instagrammable’ places in Europe, with a global travel site placing it seventh on the list, beating destinations like the Cote d’Azure, in France, Kiev, in Ukraine and Vienna, in Austria. 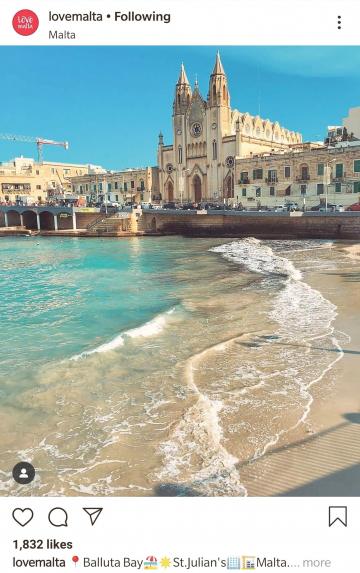 According to Big 7 Travel, which released the rankings this week, locations with “sweeping stretches of coastline, historical monuments, kitsch cocktail bars and more street art than you can possibly imagine” turned out to be the most popular on Instagram, with the final results ranked in order of their visual allure and popularity on social media.

Dubrovnik, in Croatia, topped the list, with Iceland and the Scottish Highlands featuring second and third respectively.

Cities that made it to the Top 20 include Bruges, in Belgium and Portugal’s Lisbon while the Tuscan region, in Italy, and Lake District, in England, also faring well on a regional level.

An Instagram search using #Malta reveals almost six million posts featuring some of the most iconic spots on our islands as well as some pretty spectacular off-the-beaten track spots.

Valletta, as is to be expected, ranks high on the list of top posts, with a particular shot of the skyline featuring the iconic Carmelite church dome garnering over 1,500 likes. The traditional, colourful facades in towns and villages are also popular and serve as vibrant backdrops for many a tourist selfie.

The colourful umbrella installation that brightened up Żabbar some months ago still ranks high on the top #Malta posts as do shots showcasing the crystal blue Mediterranean Sea, especially in Comino’s Blue Lagoon. Sadly, missing from the list is the Azure Window, which succumbed to the elements over two years ago. 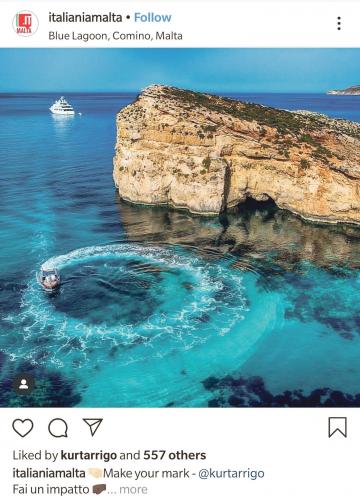 Instagram is today considered one of the main driving forces within the tourism industry. Sixty-seven per cent of people surveyed by Big 7 Media said they have visited a new destination after seeing it on Instagram and 61 per cent booked a specific hotel after seeing it on their Instagram feed. Another 33 per cent said they researched their upcoming holiday destination via the Instagram feed, leading many to wonder about the relevance of printed guidebooks in the digital age.

The survey results were reached via what the website described as “a comprehensive scoring system” that analysed the amount of hashtags per destination, survey results gathered from the site’s 1.5 million audience and votes cast by a panel of travel experts.

‘The best locations have the least tourists’

Michele Agius who, with almost 12,000 followers on his Instagram handle @micagius, is one of Malta’s top travel bloggers told Times of Malta the App broadened people’s horizons considerably.

“Lesser known places have boomed after going viral on Instagram, each due to their unique characters, be it colourful buildings, a rugged mountainous landscape or pristine seas and beaches. When travelling, it is best to find the beauty in everything, while appreciating the place for what it is and not what it could have been.”

He said that, as a travel blogger, his challenge in photographing a location was to help viewers see it differently than before.

His advice to prospective instagrammers is: “Always research a place before you visit, watch videos, read about the spot and go through the place’s hashtags to learn about the location and see what has already been done. You should aim to be different and, hopefully, to wow the viewer. If your photo does not have these qualities, it will just be missed through quick scrolling.” 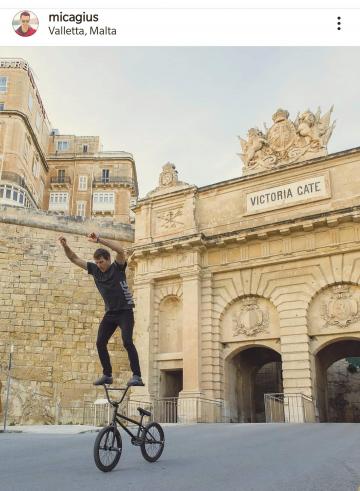 Of course, Mr Agius does have his favourite spots to instagram in Malta. Acknowledging it is very easy to take things for granted and to forget to be appreciative of the island we live on, he urged people to simply “stop, enjoy the view and realise how lucky you really are to call this home”.

“Sometimes, we forget that such beauty is at our doorstep. Playing tourist in Valletta and straying off the beaten path always presents new Insta opportunities, just like every sunset at Golden Bay does. Of all the elements on the island I’ve photographed, the Mediterranean Sea is the one I love most. With our clear seas, countless wrecks and natural stone formations, it’s not hard to see why,” Mr Agius said enthusiastically.

He recommended to those who are new to the Instagram game to forbear from starting to snap away immediately. “Don’t be lazy, look around and get inspired. The best locations are those with the least tourists around. And avoid framing unnecessary objects, such as railings,” he said.

But, most important of all, he concluded, enjoy the experience.