Malta will miss all its projected carbon emission targets for 2030 by a massive 62 per cent, making it the most regressive country in the EU by a long shot.

An over-reliance on petrol and diesel cars is one of the factors being blamed for the country coming in dead last in an analysis of how the 28 member states are progressing towards climate and energy targets.

Malta's 61.7 per cent gap to the 2030 greenhouse gas emission target is double the gap of the second worst country, Luxembourg, which will fall short by 25.3 per cent.

Only Portugal, Greece and Sweden are forecast to exceed the targets. 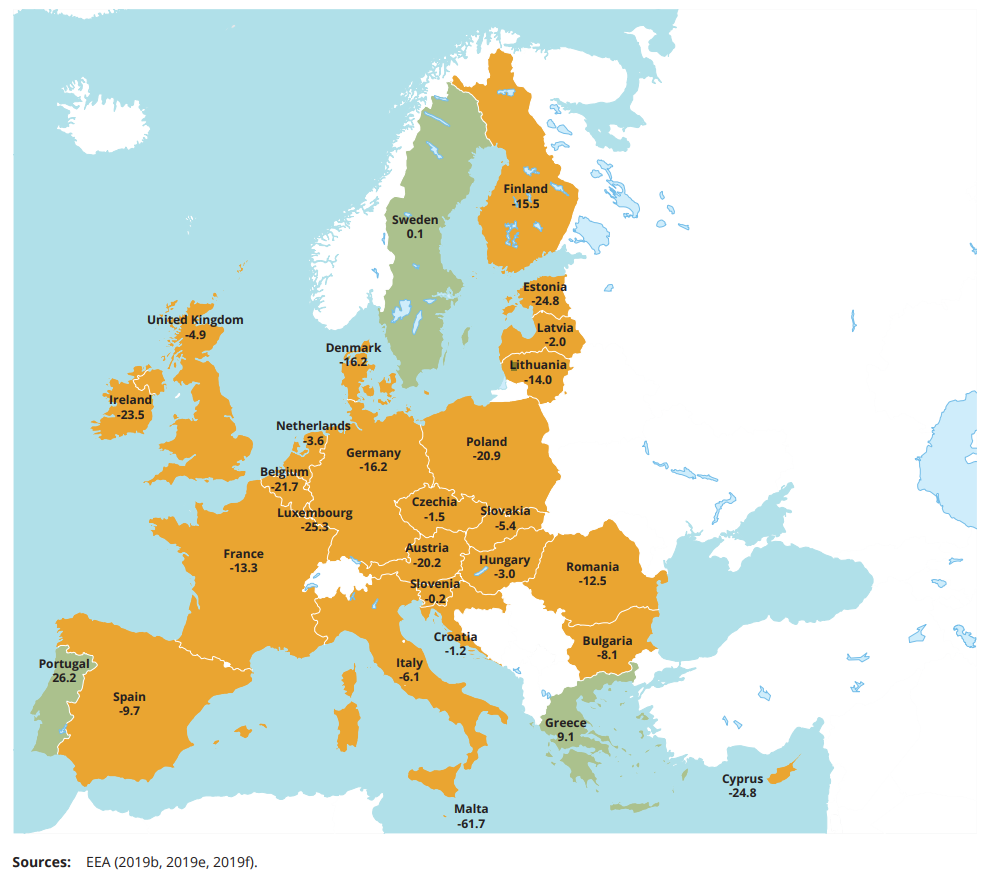 Map shows gap to 2030 Effort Sharing targets with existing measures. Countries in green are on track Countries in orange are not on track

Malta has missed its targets every year since 2013, the report said. According to the 2030 targets outlined in the report, Malta must reach a target of between 10.6% – 13.3% for renewable energy, along with a final energy target of 0.9% for of oil consumption.

The report also refers to an agreement with Bulgaria to buy its surplus emissions-reduction points so that Malta can meet its legal obligations.

It says: "Malta will need to make further use of additional flexibility mechanisms such as purchasing AEAs (annual emission allocations) from Member States that have overachieved their targets."

Professor Maria Attard and Dr Stefano Moncada of the University of Malta said: "For those in the know these figures are no surprise."

Both academics, who are involved in the Climate Change Platform at the University of Malta, explained that although the country has made progress switching to gas for power generation, nothing was being done about the transport sector.

Dr Attard and Dr Moncada said the transport sector was "the second largest emitter in the islands" and said there was "a lack of restraint" on car use and car ownership.

Petrol and diesel cars are to be phased out in Malta but the government has yet to announce the cut-off date.

The academics said there has been a real lack of effort to address the aging car fleet, alternative means of transport and the bigger vehicles that consume more fuel and pollute more.

"We are basically building more roads for more cars," they said in a joint response.

"The priority given to the private car in the road design and construction has also undermined any chance for public transport to improve and be an attractive alternative to the car. We have indeed reduced the priority to bus (also through lack of enforcement of existing bus lanes) rather than increase it."