The government has denied claims made by an NGO ship at the centre of a recent migrant dispute with Italy that the Maltese authorities have refused to allow it permission to dock at any of its ports in the future.

The BBC, which currently has a reporter on board the rescue ship Aquarius, said the decision to bar the vessel from entering applies "whether or not" it has migrants onboard.

But a government spokesman told Times of Malta that no such order was given by the Maltese port authorities and denied the claim made by the crew.

"We deny there was a request by MV Aquarius to dock in Malta," he said.

The claim comes as the Maltese authorities on Saturday asked the Aquarius to rescue a migrant boat in distress just 10 miles off the Tunisian coast.

Spain swooped to help the group of mainly sub-Saharan Africans on board the Aquarius last week, offering the charity-run ship a berth 700 nautical miles away after Italy and Malta refused to let it dock. The nine-day saga at sea sparked yet another migration crisis across the EU.

Maltese maritime Command has asked the #Aquarius to rescue a reported migrant boat, in distress 10 miles off coast of #Tunisia. The #Aquarius is close to #Malta, 50 nautical miles away from the boat.
We should get there in the next 5 hrs. It’s marked as a triangle on the map. pic.twitter.com/yP1tKOGMnz

The latest development comes after a group of 239 rescued migrants remain stranded outside Malta's shores amid a legal wrangle between Italy and Malta. On Friday, Italy's right-wing deputy prime minister Matteo Salvini said Malta should take in the migrant vessel MV Lifeline and arrest its crew.

Read: Italy has no right to make migration demands on Malta - PM

The leaders of about 16 EU countries -will take part in what is being billed as "informal talks" on migration in Brussels on Sunday, ahead of a full EU summit on June 28-29, where migration will top the agenda. 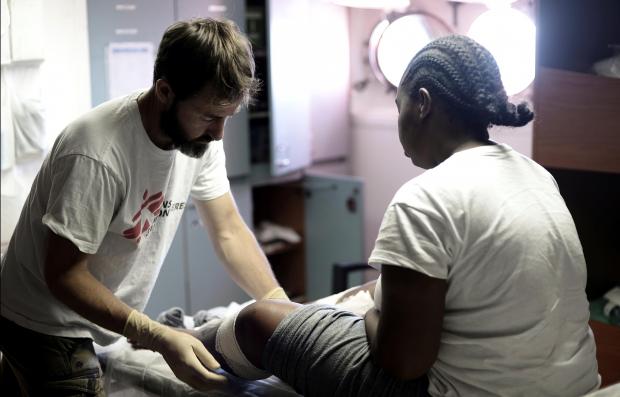 A migrant receives medicaments by a doctor on the MV Aquarius on their way to Spain. Photo: Reuters