The Sicilian town of Scicli has been a port of call from Malta for at least the past 900 years. Historian Ivan Grech writes: “While for pre-Hospitaller Malta, Scicli was primarily a trading post, convenient for the barter of commodities with Sicilian products, for early modern Malta it became the most immediate gateway to Christendom and an ever-expanding world.” 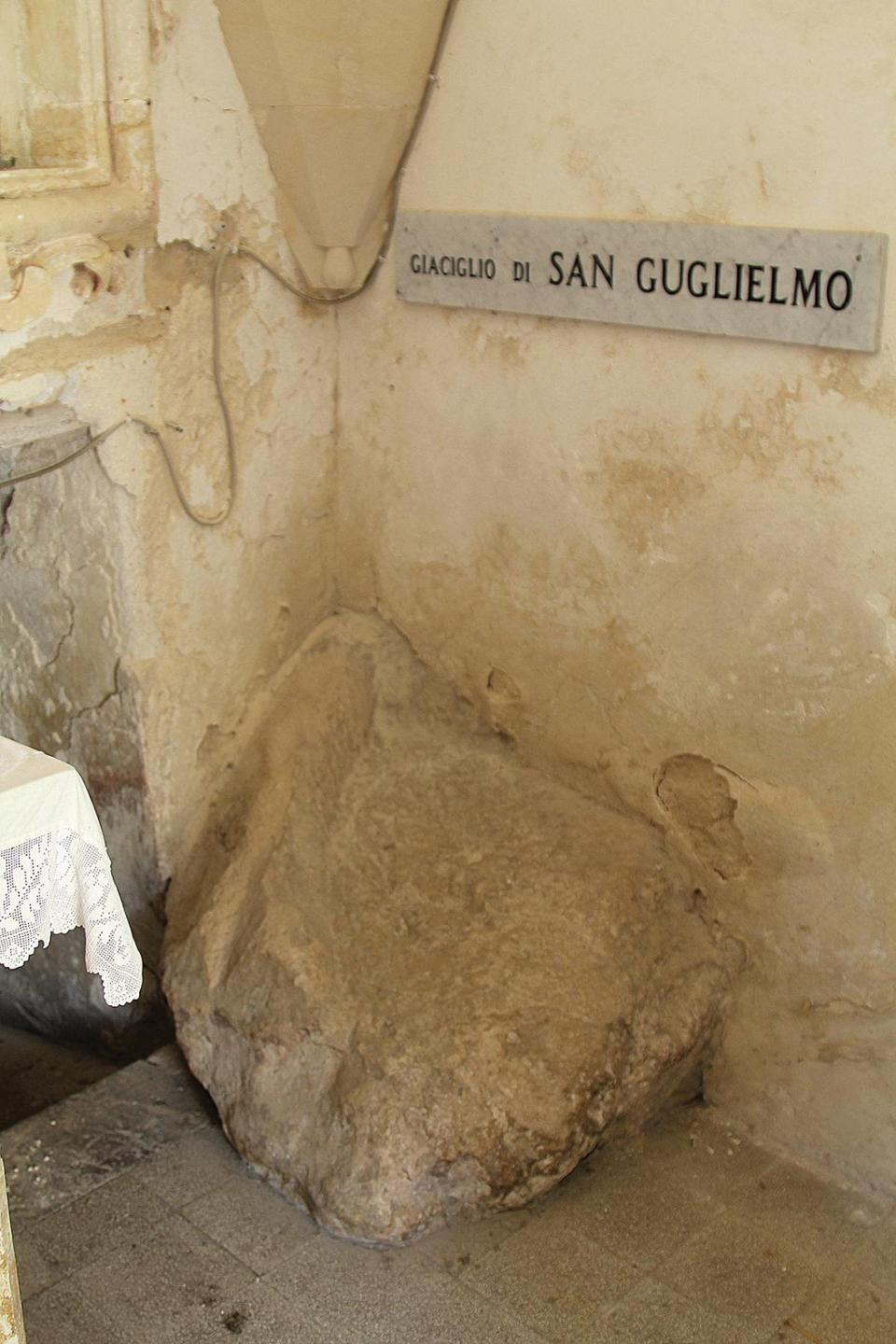 A stone used as a bed by San Guglielmo the hermit.

Basically, to put it in Grech’s words, Scicli, “largely inconsequential to the major Mediterranean traffic and salient events of any age, was in many ways more relevant to Hospitaller Malta than diplomatic powerhouses like Madrid or Paris. Scicli and its relevance to the Maltese archipelago can, in fact, constitute a most apposite example of micro-history”.

Maritime connections bet­ween Malta and Scicli have been recorded since the medieval times of Muhammad Al-Idrisi. According to the latter, in Scicli one could find all the best pro­ducts available at the time. In fact, the gardens in Scicli produced all sorts of fruit and ships visited the area from Africa, Calabria, Malta and many other places.

According to Keith Buhagiar, Idrisi’s “mention of Siklah is either a reference to Marsa Sciklah harbour located south of the settlement of Scicli or the town of Scicli itself, which in high medieval period sources was similarly referred to as Sciklah”. What­ever the precise location, Marsa Sciklah (which corresponds to today’s Sampieri) or Scicli town, the maritime link between Scicli and Malta must, therefore, go back to at least AD 1154. 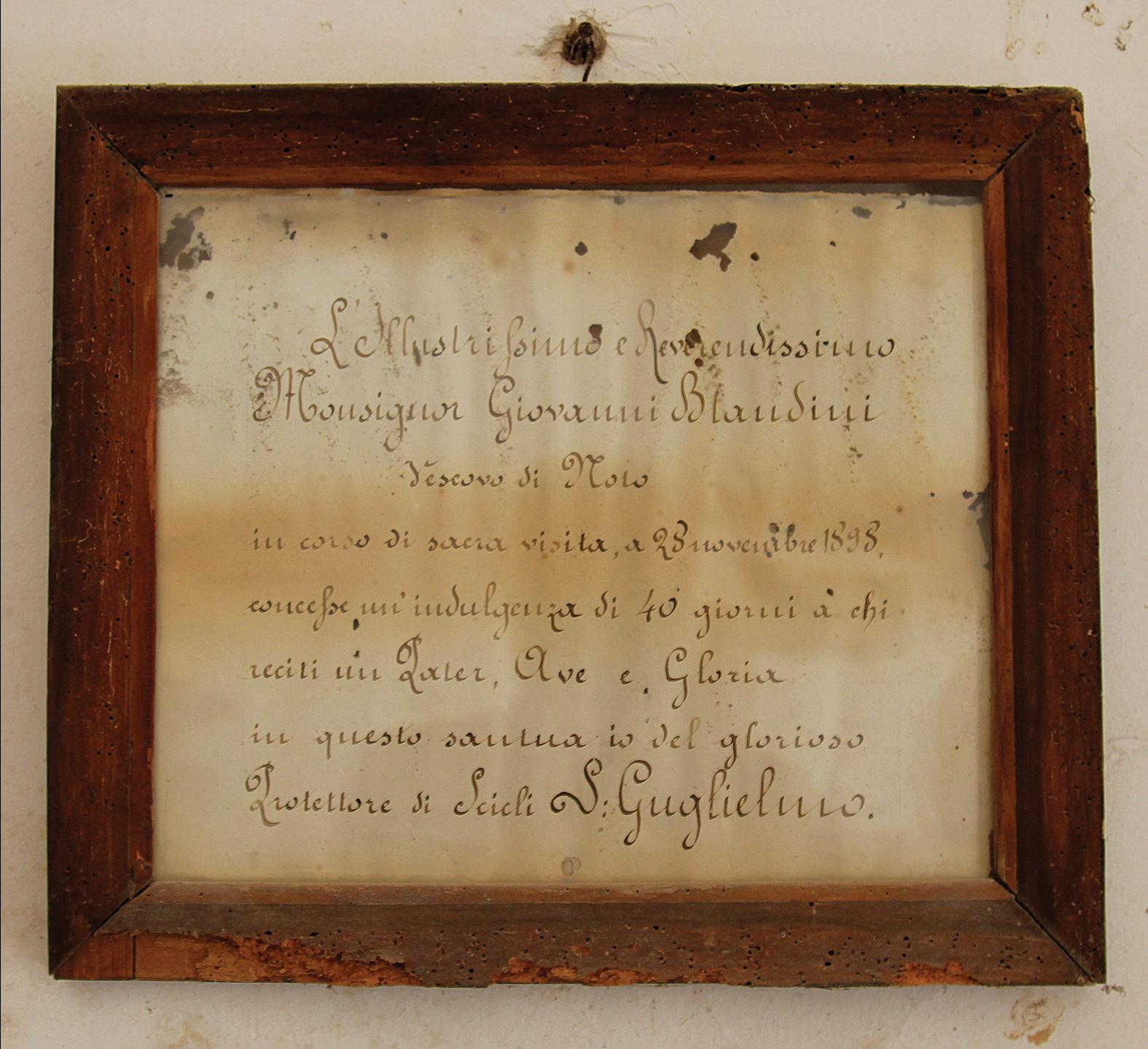 Abela is here referring to the ancient city of Caucana, which was situated a few hundred metres away from Punta Secca. Today, only archaeological remains of Caucana are left and these remains are to be found on the outskirts of Santa Croce Camerina. 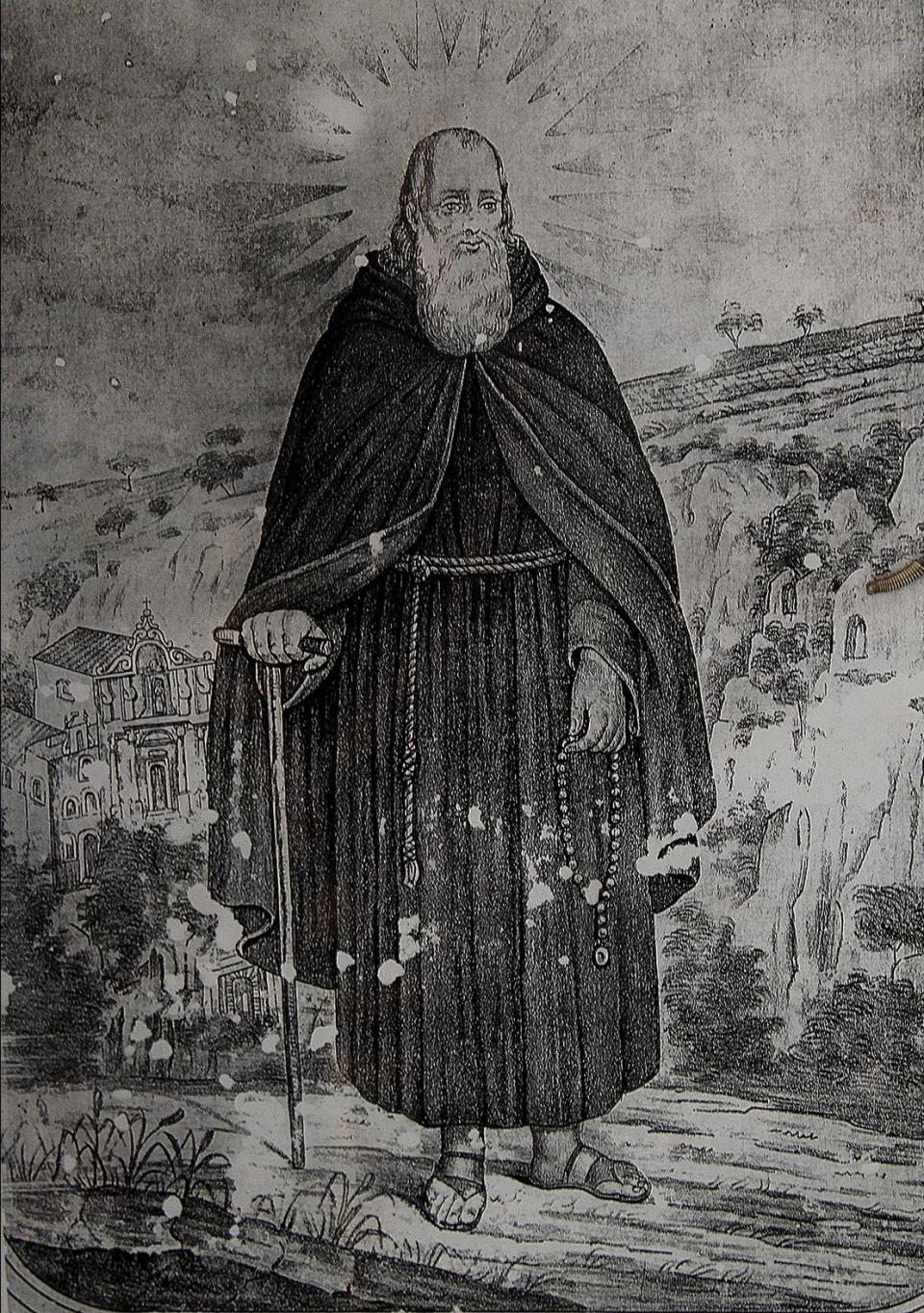 An image of San Guglielmo.

Buhagiar instead comes up with an interesting hypothesis with regard to Maltese-Sciclitani connections in the Middle Ages. Considering that both the AD 870-871 Muslim invasion of Malta and the AD 1091 Norman reconquest of the island were launched not much after the fall of the town of Scicli, in those respective years, Buhagiar concludes that these two ‘Malta expeditions’ departed from Sicily, “possibly through the maritime gateway of Marsa Sciklah harbour”. If this were so, the Malto-Scicli sea link could be further backdated to AD 870.

That Scicli had direct connections with Malta in earlier times is a proven fact. Alessandra Triglia, in her report on the “Tratto di costa da Sampieri a Marina di Modica fatta alla Commissione Provinciale per la tutela delle Bellezze Naturali e Panoramiche di Ragusa, il 23/31990”, quotes G. Columbo’s I Porti Antichi, which states that this part of the coast can historically be defined as the area of the “Marse” or “of the ports” since the shallow waters of the sandy beach in the area have contributed to form numerous lagunas. 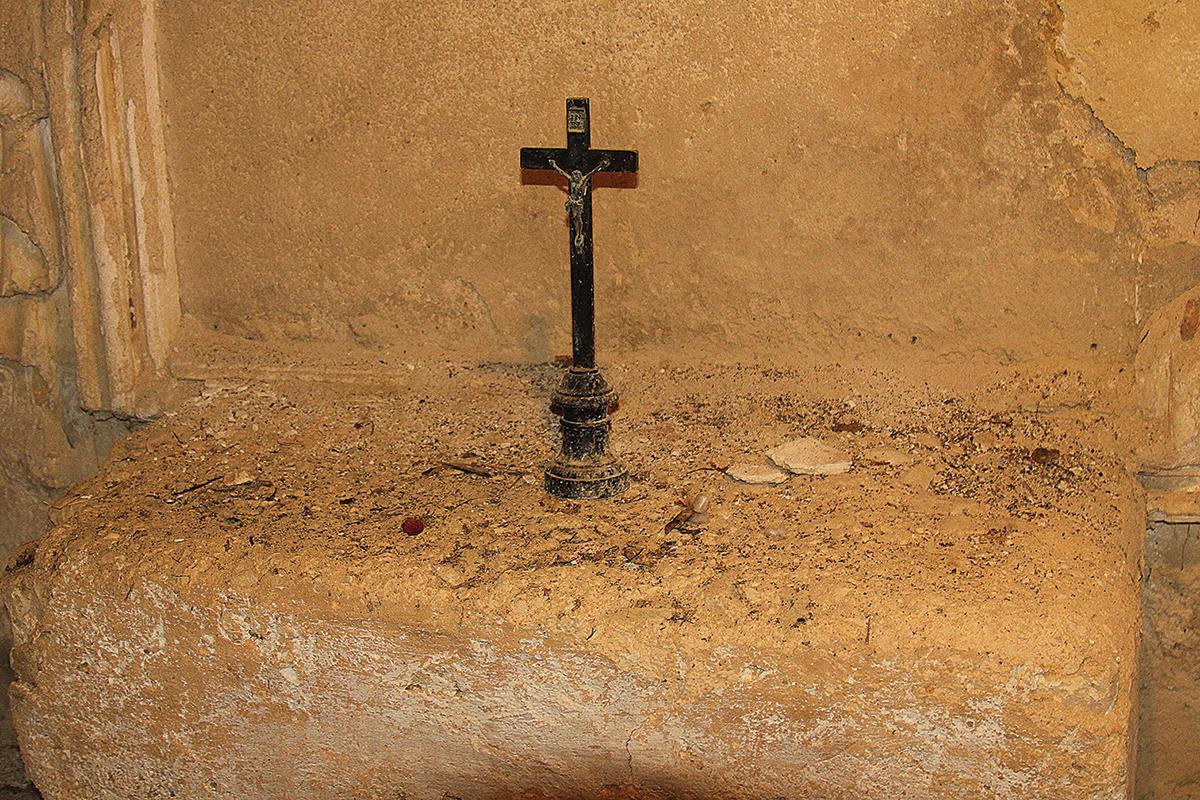 A crucifix in a part of the chapel.

The point known as Sampieri has formed a sort of harbour because of its height and form. This harbour has been cited during the course of the centuries and, in certain weather conditions, one can notice the remains of a wooden quay that, according to Triglia, once served as a boarding pad for ferry boats leaving Sampieri for Malta.

Scicli and Malta in the pre-Knight period

Scicli began having important connections with Malta before the arrival of the Knights, when, as historian Mark Aloisio points out, the bartering of goods bet­ween the two localities was quite a regular activity. The buying of property in Scicli by Maltese in the pre-1530 period has also been recorded. 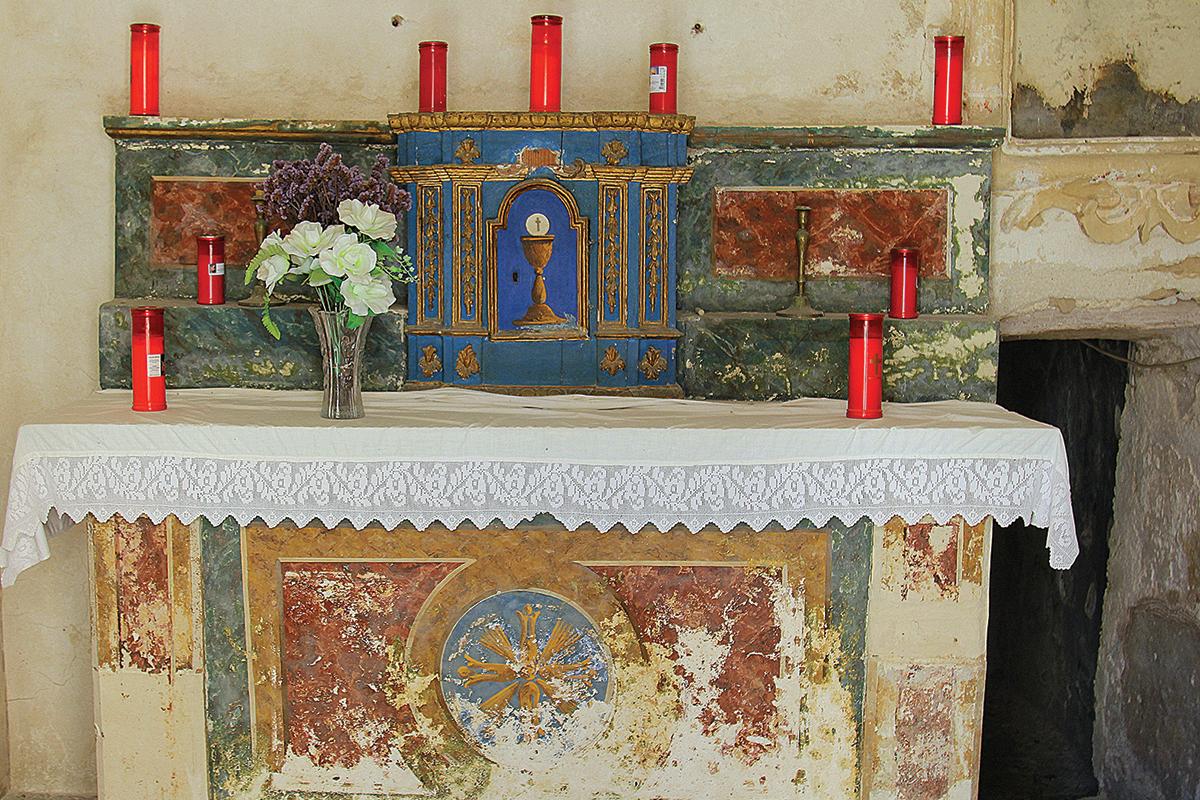 An altar in the abandoned chapel built at the place where San Guglielmo lived as hermit.

A September 11, 1504 entry in the notarial deeds of Giuseppe di Lorenzo, a notary who practised his profession in Scicli, states that a “Mautisi” by the name of Cola had bought certain houses “a Balatelli, zona di Mindulli” from Pietro di Majo. Cola and a certain Luca di Portelli (was he also Maltese?) had redeemed the land tax (‘Jnchenzo’) worth six tarì from the Confrati of Santa Maria della Pietà. 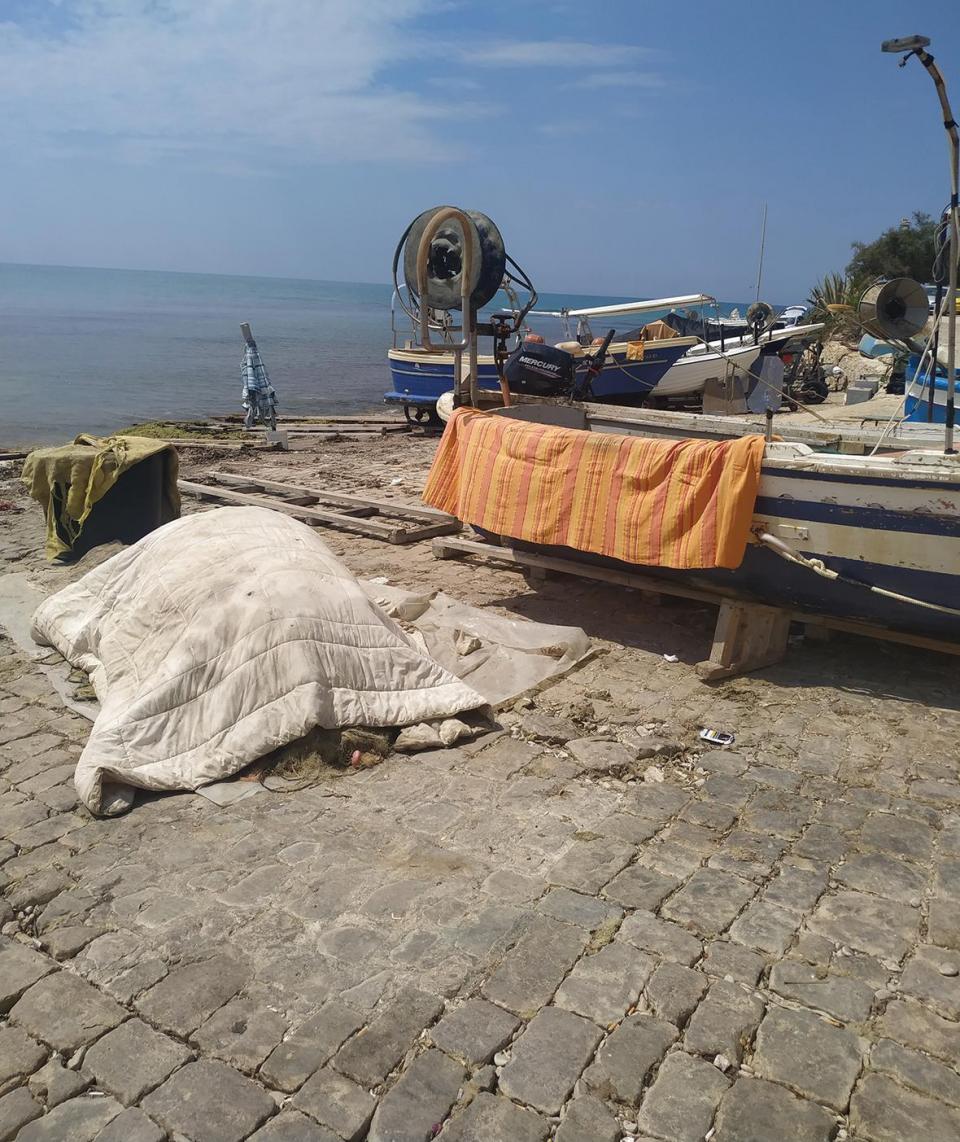 The old port of Marsa Siklah.

Basically, one of the miracles that earned Guglielmo his beatification was performed on a Maltese man who came over from Malta and went to visit the tomb where the hermit was buried. There, the Maltese man, who had ringworms all over his head, leant down in devotion in front of Guglielmo’s tomb and prayed the saintly man to cure him of his malady.

The sacristan of the period at the San Matteo parish, a certain Don Francesco, was present at this event and he gave his testimony at Guglielmo’s beatification process. Don Francesco testified that the Maltese man’s prayers were heard and that he left the place miraculously cured of his malady and libera­ted of all ringworms.

The miraculous feats of the Beato Guglielmo of Scicli left a mark not only on the local population, that still today remains very much devoted to this Scicli personality, but were also closely followed by the people in Malta. According to another Sicilian scholar, the Franciscan father Giovanni Parisi, devotees from Malta frequented Guglielmo’s dwelling and burial site from the 16th right through the 19th century. 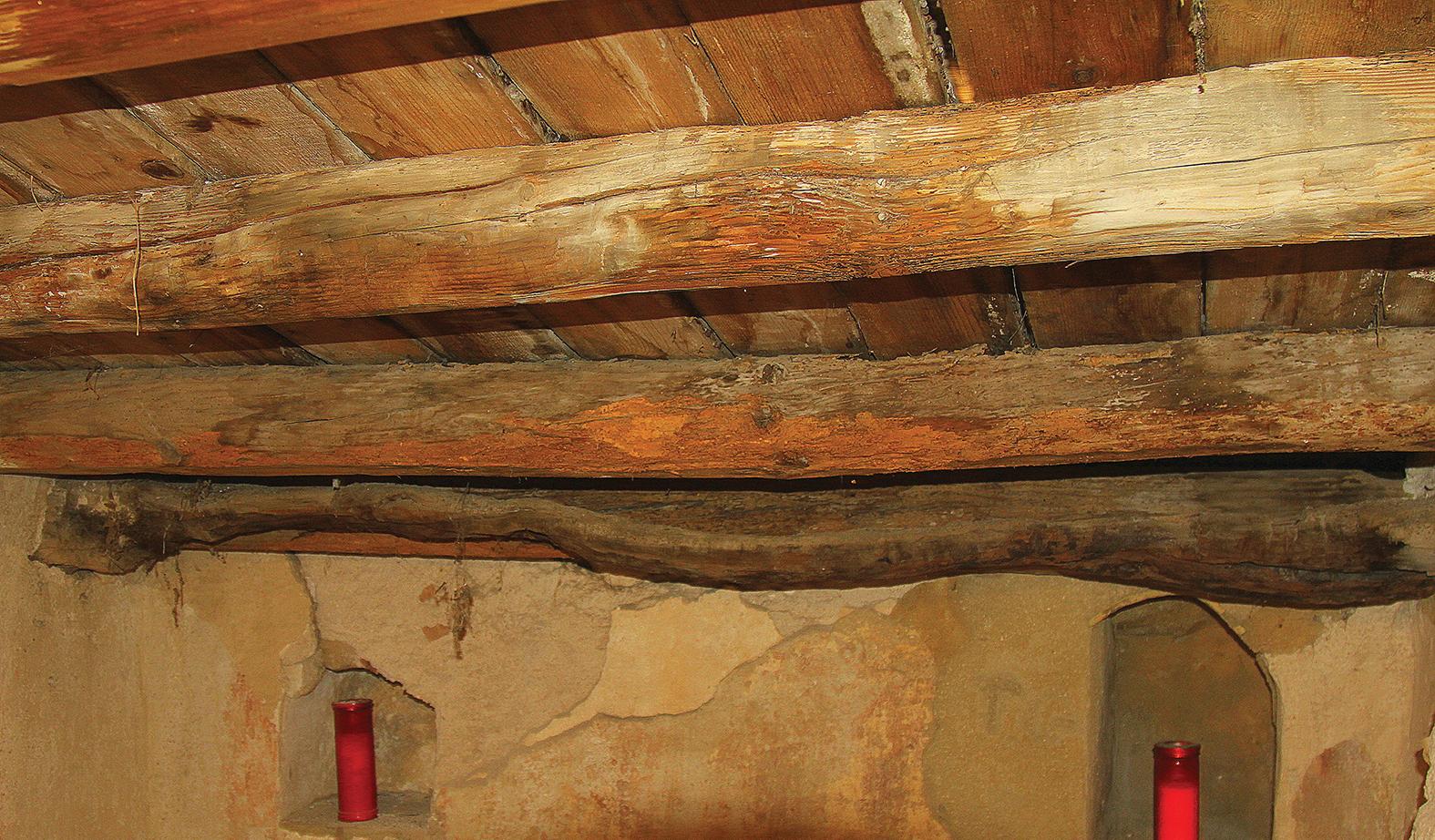 The wooden beam at the far end from which Maltese pilgrims used to take splinter souvenirs.

According to Parisi, one particular feature of these Maltese visitors was that they always cut out for themselves some souvenir from the beato’s abode to take back to their home island as a relique. The most popular of these was a splinter from the only surviving original wooden beam that supported the ceiling in the saintly man’s tiny abode. According to tradition, so many splinters were carved out of this beam by the Maltese pilgrims that the result of such carving into the wood is still visible today to the naked eye.

Following the arrival of the Knights of St John in Malta, the contacts between Malta and Scicli intensified. A Mattia Preti painting is to be found at the San Bartolomeo church in Scicli, along­side a painting by local artist Francesco Cassarino, who is said to have lived in Malta. Scicli also became the most important provider of grain in Malta. But I digress, since these topics pertain to the early modern period rather than to medieval times.

Thanks go to Don Ignazio La China, without whose help this article would not have been possible.