The fallout of the investigation into the assassination of Daphne Caruana Galizia spiraled into a political crisis that brought the country to a standstill and popular culture has likewise caught up to the situation.

As revelations took one dramatic turn after the other and protestors took to the streets on many consecutive nights, movers and shakers in popular Maltese media also started putting out work commenting on the proceedings or clearly influenced by the current climate.

Brikkuni, one of Malta's finest bands, led by Mario Vella, seemed to get the ball rolling by recording a new single, along with an equally scathing and indicting music video.

Alla Illiberani (Lord deliver me) features Vella in front of a screen as footage of protests and public officials, especially from the 2013 Tagħna Lkoll theme song is projected over him.

The visuals serve to illustrate the band’s critique of what they have called the government’s ‘failed neo-liberal experiment’ and cut with the song’s protest-inspired lyrics.

Before the single’s release, the band wrote on Facebook that while it had been a while since songs of protest had formed part of their repertoire, “in light of these spectacular times we’re going to give you one anyway”.

“Don’t be afraid of anyone,” Brikkuni wrote when posting their music video on social media.

“It’s time for politicians to start feeling the bite of a cold jail cell.”

Taking visuals cues from the eponymous 17 Black, REA’s lyrics lament how corruption and shady back-room friendships have plunged the country into crisis, while politicians continued to rule without impunity like they’ve been playing a game of roulette.

Undercut with footage taken directly from protests held by Moviment Graffitti in recent days, REA’s condemnation is clear. Despite its financial and infrastructural progress, the country’s “morality, ethics and justice have ended up like Daphne Caruana Galizia”.

On the more comedic side of things, animator Danny Lesco brought his ne'er-do-well character Frans il-ħamallu out of hiatus to pitch his two cents.

Frans, who rose to infamy on YouTube over a decade ago after a fictional, off-colour exchange with former prime minister Lawrence Gonzi, is now a fellow journalist posted outside parliament where he speaks to a couple of protestors and even snatches an interview with elusive former minister Konrad Mizzi.

Mallia weaves a litany of strong-willed spoken word that decries hard partisan lines and urges listeners to think about who such division ultimately end up serving.

Calling back to Briffa’s opus, Mallia borrows the poet’s iconic opening lines, “Jien Maltija! Miskin min ikasbarni, miskin min jidħak bija!” (I am Maltese! Woe is he who oppresses me, woe is he who deceives me!).

Satirists were also having a field day, as very serious satire news site Bis-Serjeta – Serjeta Biss kept readers abreast of the crisis with memes, such as that of President George Vella urging protestors and the government to “just make up already” and headlines claiming that the crisis would be resolved by a Valletta-wide egg fight.

In the meantime, on Thursday morning a website called 17Bdp cropped up online claiming to be “a new metric by which to understand the economy”.

The site calculates currency conversions from € to ‘daily 17 Black payments’, in reference to payments the company owned by alleged murder mastermind Yorgen Fenech was meant to make to secret Panama companies owned by former OPM chief of staff Keith Schembri and former Tourism Minister Konrad Mizzi. To this end, the calculator takes any entered amount and divides it by 5000. 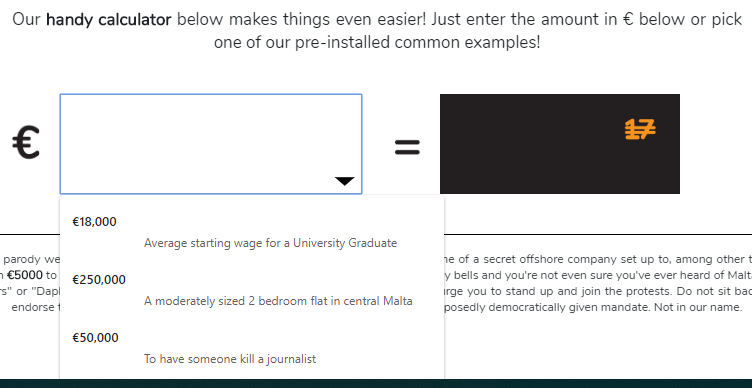 A disclaimer at the bottom says that while the website is a parody, the events after which it is inspired are very real, while urging visitors to “not sit back and passively endorse this (or any) government's corruption of power”.