Maltese economic growth is expected to slow in the coming months, but the local economy will still be the best performer in the European Union, according to the EU’s autumn forecast, issued on Thursday.

“Malta’s economic performance continues to be strong, driven by robust domestic demand. Growth is expected to slow down from the high rates recorded in recent years, as private consumption and export growth moderate. Employment growth is set to continue, albeit at a slower pace, while the unemployment rate remains at a record low. The government is expected to maintain a budget surplus,” the EU said. 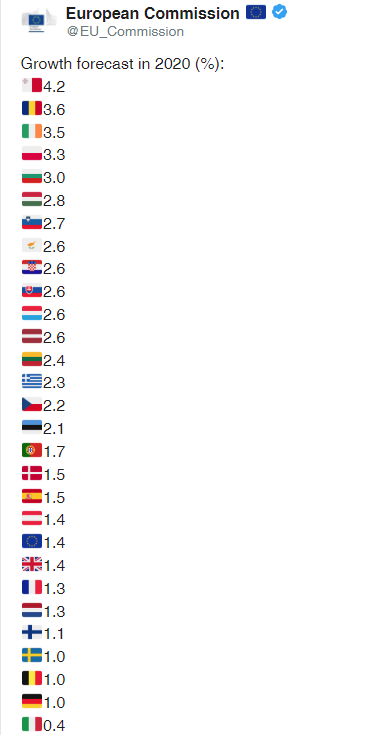 “Growth is expected to continue over the forecast horizon, but the pace of expansion is expected to gradually ease from 5% in 2019 to 4.2% in 2020 and 3.9% in 2021. Private consumption growth is set to weaken but should remain above its historical average, due to favourable labour market conditions.

Large-scale projects planned in the aviation, health and tourism sectors are set to boost private investment. Residential construction investment, by contrast, is expected to moderate after several years of strong growth,” the report says.
Investment growth is forecast to remain high until 2020 and to slow down thereafter, as a number of infrastructure projects reach completion.

Export growth is expected to remain relatively low over the forecast horizon, reflecting a weaker external environment and elevated global uncertainty. As domestic demand remains high, imports are set to grow somewhat faster than exports in 2020, before decelerating in 2021.

The commission observed that the recent steady increase in Malta’s labour supply, due to both higher domestic labour market participation and a net inflow of foreign workers, has kept wage pressures contained despite persistent labour and skill shortages. As economic growth slows down, the fast pace of job creation is expected to moderate.

At the same time, the labour market tightness is set to translate into increasing wage pressures and higher unit labour cost.

Headline inflation is projected to decline slightly from 1.7% in 2018 to 1.6% in 2019, as the rise in unprocessed food prices is expected to be offset by low prices for non-energy industrial goods due to weak inflationary pressures in Malta’s trading partners.

Inflation is set to pick up moderately and reach 1.7% in 2021, reflecting a recovery in imported goods’ prices.

The European Commission said that in 2020,  the government’s budget surplus is set to decline further to 1% of GDP.  Assuming no changes in policies, the surplus is projected to remain unchanged in 2021.