The most exemplary new contemporary architectural and interior design projects in Malta were recognised at a virtual Malta Architectural and Spatial Planning (MASP) awards ceremony organised by the Planning Authority. 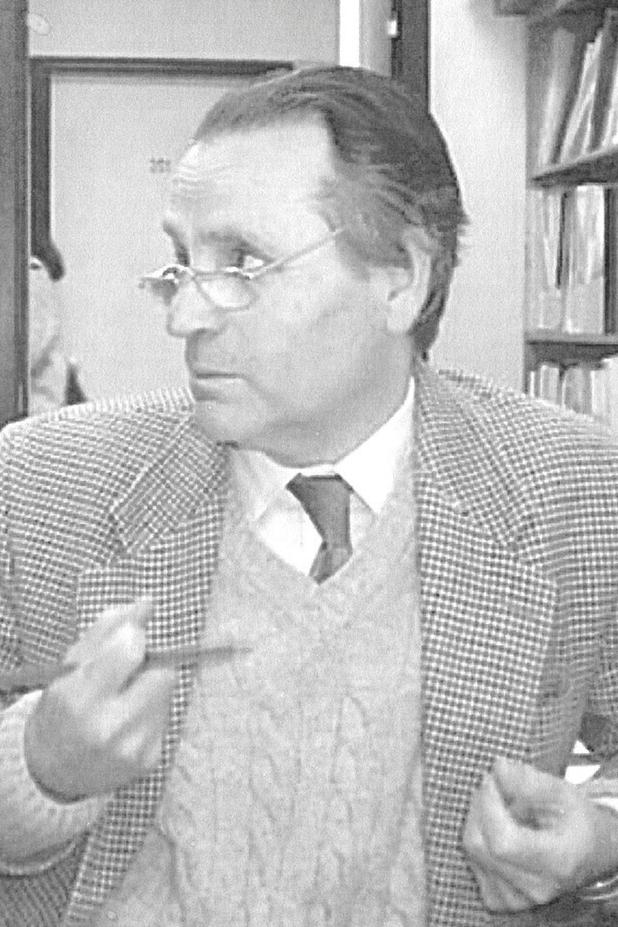 The winners of the 2020 MASP awards included some well-known architectural firms as well as younger periti and interior designers who are slowly making a name for themselves within the industry.

The Rehabilitation and Conservation Award was won by Camilleri Paris Mode Design Studio for their work on Villa La Fiorentina,  in Attard. Here, the architectural firm transformed a dilapidated building into a 21st century home.

The jury noted that the restoration of the local limestone was sensitively carried out, retaining the original patina while the building’s salient historical features were also conserved and integrated. Well-designed extensions were made, in keeping with the character of this historic house.

The jury said that the overall design successfully showcases the inspired use of materials and colour that complete the transformation and that each space, both internally and externally, has been sensitively detailed with the overall scheme in mind, leading to a holistic and coherent design.

The Catholic Teaching Centre in Nadur by Edward Scerri Architect Studio, Candle House by architectural firm MODEL and Admiralty House, in Valletta by the Restoration Directorate received a special commendation in this category.

Casa Bottega, in Valletta by Chris Briffa Architects got the Urban Design Award. The jury found this project to be an excellent case study on how contemporary vertical extensions can be successfully integrated within the historic urban fabric of Valletta. 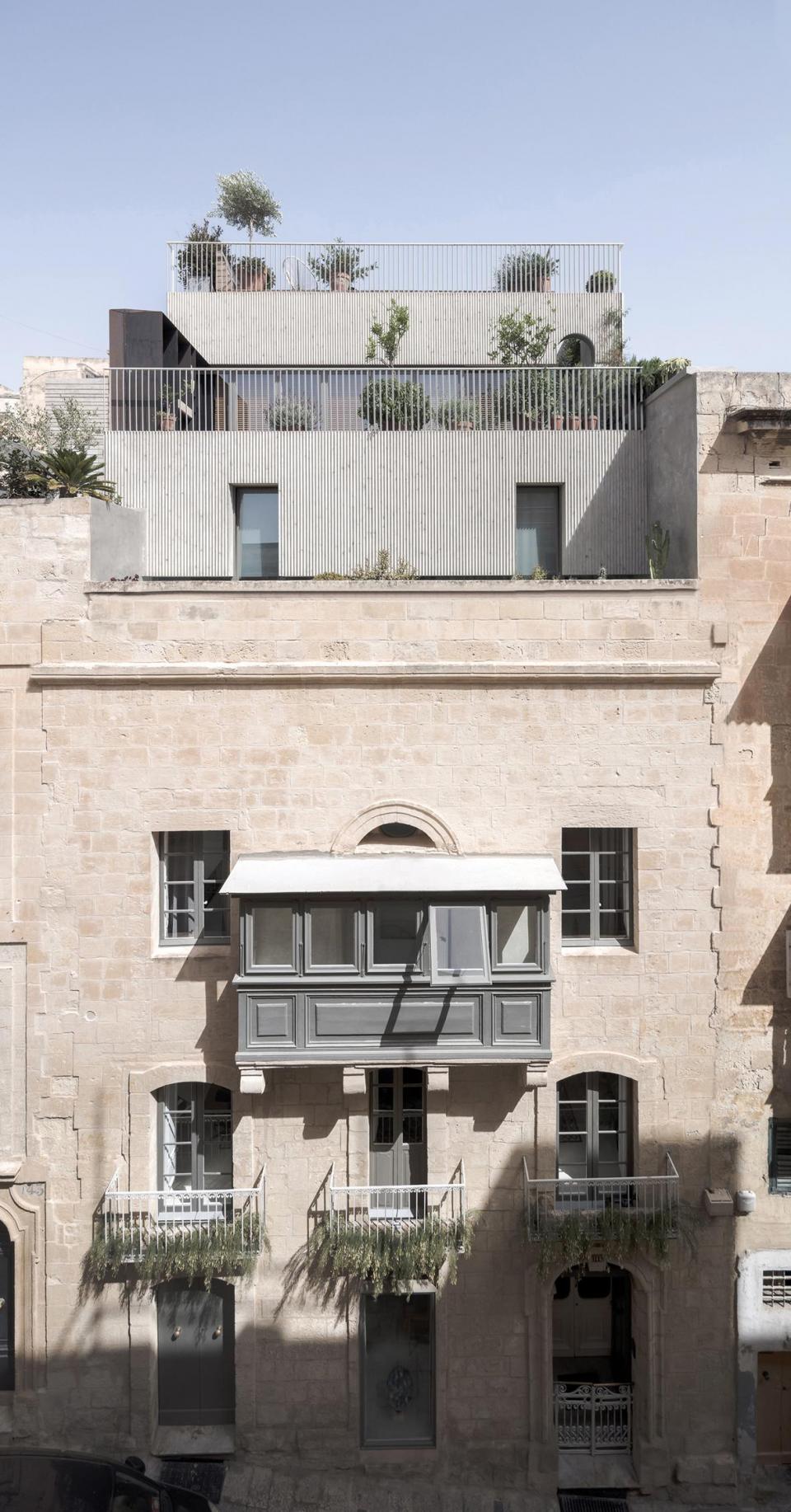 The original façade of the building has been retained and restored to maintain the cohesiveness of the streetscape while additional floors were added at roof level. The extension features a prefabricated textured concrete screen interpreted in a simple style that echoes the austere architecture of several buildings in the vicinity. Lighting, soft landscaping and colour contribute to the high-level execution, implementation and delivery of the project within its historic urban context, the jury said.

The Public Open Spaces Award was won by Martin Xuereb & Associates for the Piazzetta, in Sliema. The jury praised the way space allows for a sense of calm and tranquillity in a hectic area along the Sliema seafront, elevated from the hustle and bustle of the promenade. Seating is successfully incorporated into the scheme, which includes access from the lower levels through an elevator on one side and step-free access on the other.

The Pjazzetta l-Għammiedi, in Xewkija by perit Mariella Xuereb was given a special commendation within this category.

Architectural firm DeMicoli & Associates is the winner of the Commercial and Public Buildings Award for the Tipico Building, in St Julian’s. This iconic building adjacent to Portomaso Tower maximises the site of a formerly low-lying building and rises to 13 storeys above the street level of the complex.

The jury said the project managed to overcome challenges concerning the foundations and the construction of the building by providing a development which alludes to its context by using materials that can be found in the neighbouring tower but in a form that stands out on its own merit.

The Interior Architecture Award for Residential Projects was won by interior design firm Atmosphere Design for its makeover of a residential villa in Kappara.

The jury found this project to be very well balanced overall, both in terms of its interior design as well as in the creation of a homely space, as befits a residence. They found a clarity of concept, resulting in a consistent design throughout the residence with the use of a varied but cohesive material palette which adds colour and texture to the scheme. A winning element of the design, according to the jury, is that it gives priority to natural light which permeates within each room of the building, accentuating the attractiveness of each space within the home.

Forward Architects and Archi+ received a special commendation for a Tigné duplex penthouse in Sliema and Concrete House, in Madliena, respectively. 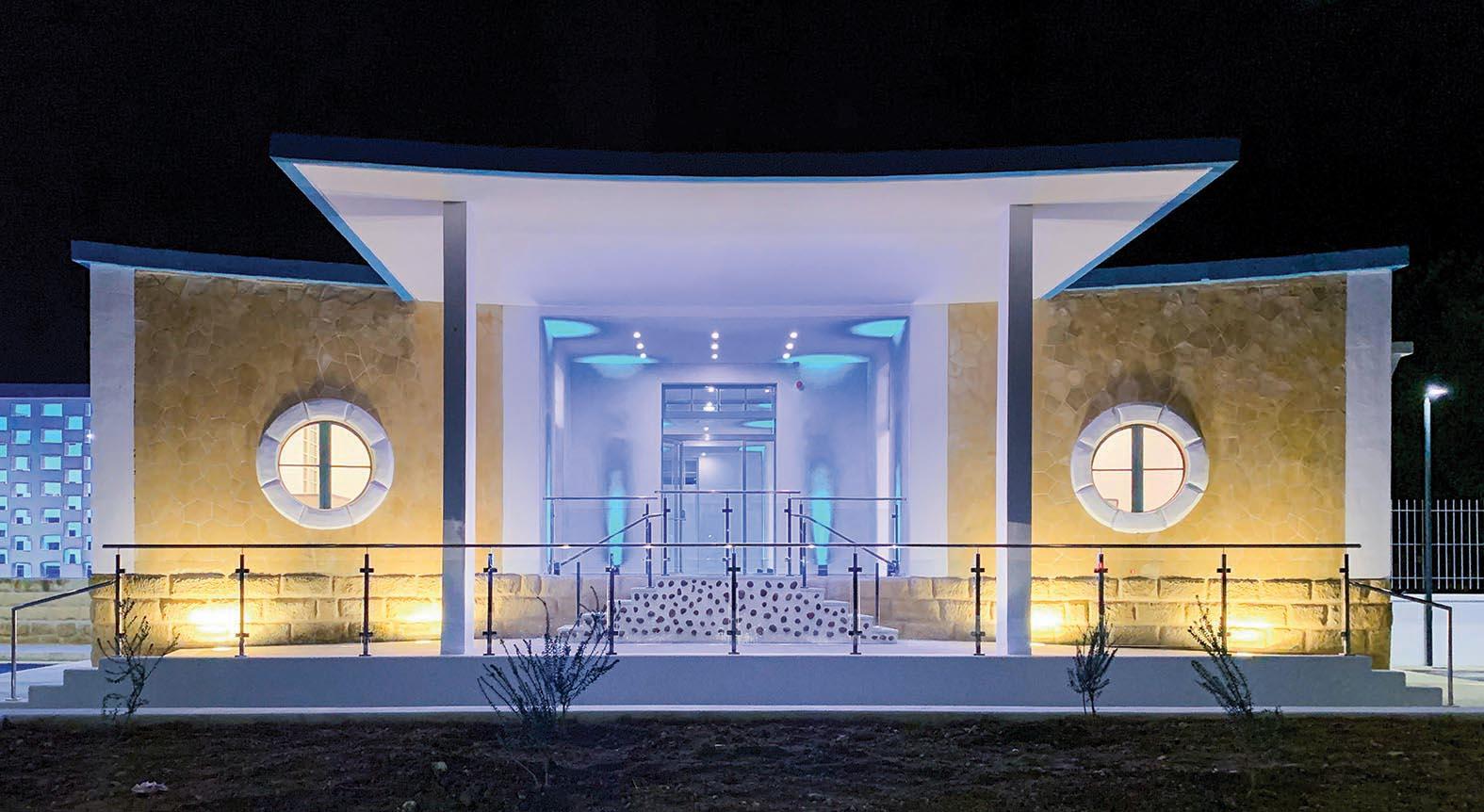 In a tightly-contested category, Studjurban won the Interior Architecture Award for Commercial & Public Buildings. This interior design project sets the standard for childcare centres, in terms of both the overall concept and the attention to detail. It is exemplary in its child friendliness and incorporates both aesthetic and functional elements successfully, such as a bespoke timber partition and rounded edges to the floors. The project exhibits a particularly dynamic and playful use of a wide spectrum of colours which appeal to children’s sense of curiosity.

Special commendations in this category were given to architectural firms Archi+ and MJMDA for 230 Works, in Mosta and MAPFRE MSVLife offices interiors, in Floriana, respectively and interior design firm Aha Objects for the interactive retail store Souvenirs That Don’t Suck & Té fit-Tazza,in Valletta.

University Student Daniela Spiteri Binett, who is reading a Master’s degree at the Faculty of the Built Environment, was the winner of the Urban Planning Concept Award. She won for her concept project ‘A Village Amidst the Landscape’ which comprises a vision to reconnect the settlement of Baħar iċ-Ċagħaq with the sea and promotes the use of collaborative design. It is an example of how to spatially integrate outlying urban settlements through underground links and showcases how civil engineering can have a positive social impact by promoting better links and a healthier lifestyle. 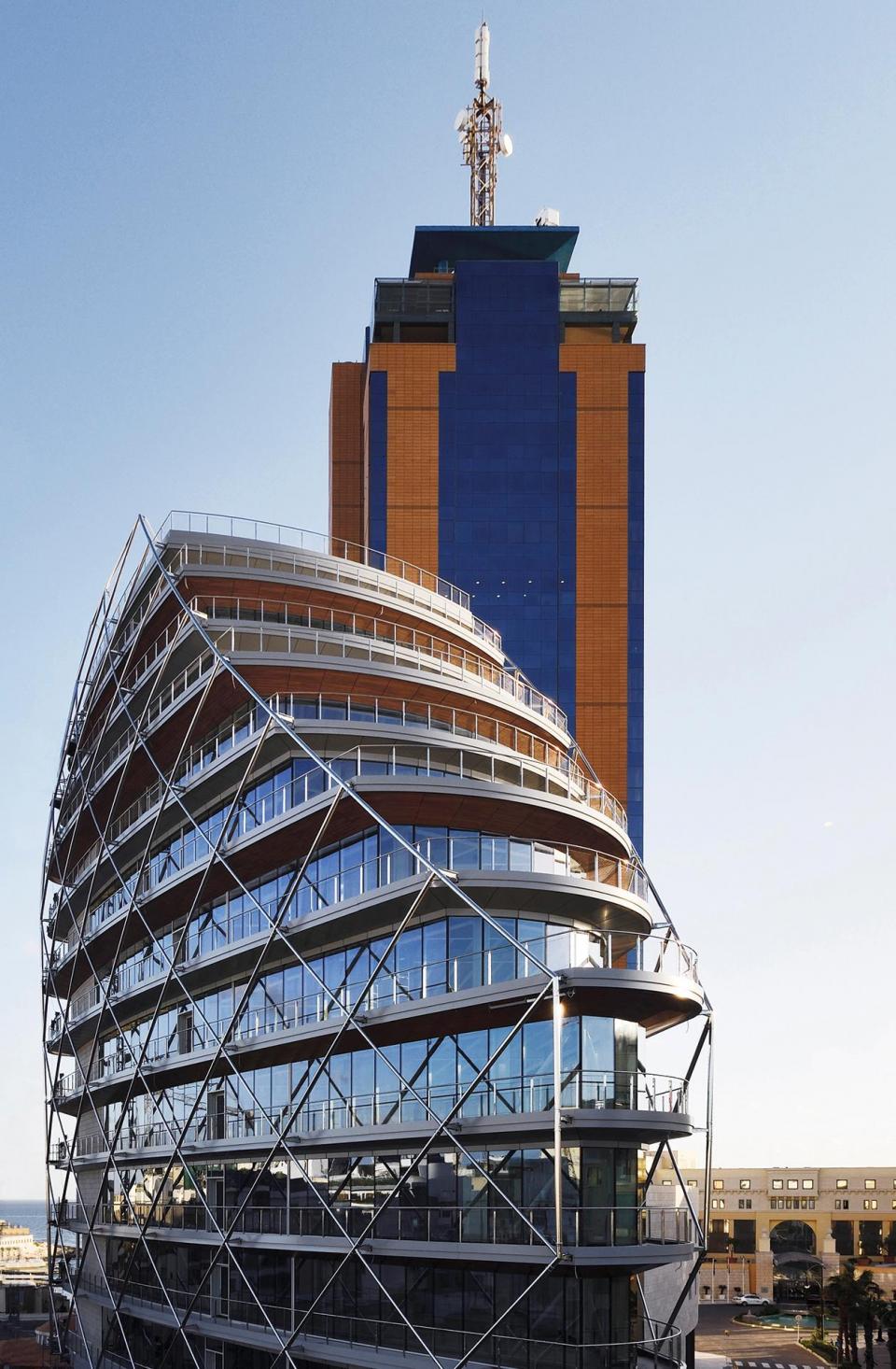 GHRC and Studjurban received a special commendation for the Integrated Transport Strategy for Valletta and the Gżira Gardens Marina respectively.

The Hospitality, Tourism Accommodation & Leisure Award was given to 3DM Architecture and perit Elena Borg Costanzi for The King George and Berta Hotel,  in Għargħur. The jury considered this project to be an excellent example of how the hospitality industry can sensitively permeate the traditional towns and villages of the Maltese islands. It said the hotel retains elements of the vernacular character of the building and achieves a “human sense of scale”. Also, the historic fabric is respected and enhanced through the design of the hotel, which is of high quality as well as being cohesive in its use of natural materials throughout the scheme.

Special commendations in this category were given to architectural firms EM Architects, QP and Mizzi Studios for BeefBar, in St Paul’s Bay, the Athenaeum Spa, in Attard and Barbajean, in Dingli, respectively.

MED Design is the winner of the Sustainability Award for the Gozo Innovation Hub in Xewkija. The new building features a louvre system that is solar-oriented to avoid excessive heat gain. Also, the external areas have been landscaped using indigenous trees, requiring less irrigation, and mature trees on site were also retained. The retention of the original concrete structure is a good example of retaining a scarce and non-renewable natural resource aggregate, the jury said. The historic part of the project celebrates the work of renowned local architect Joseph Huntingford and gives a clear message that adaptive reuse of modernist buildings is important both in the cultural heritage sector as well as in the sustainability sector.

Infrastructure Malta and Doric Studio received a special commendation for their projects ‘Connecting Communities through Elevated Crossings in Urban Settings’ and Green Wall, in Marsa, respectively. 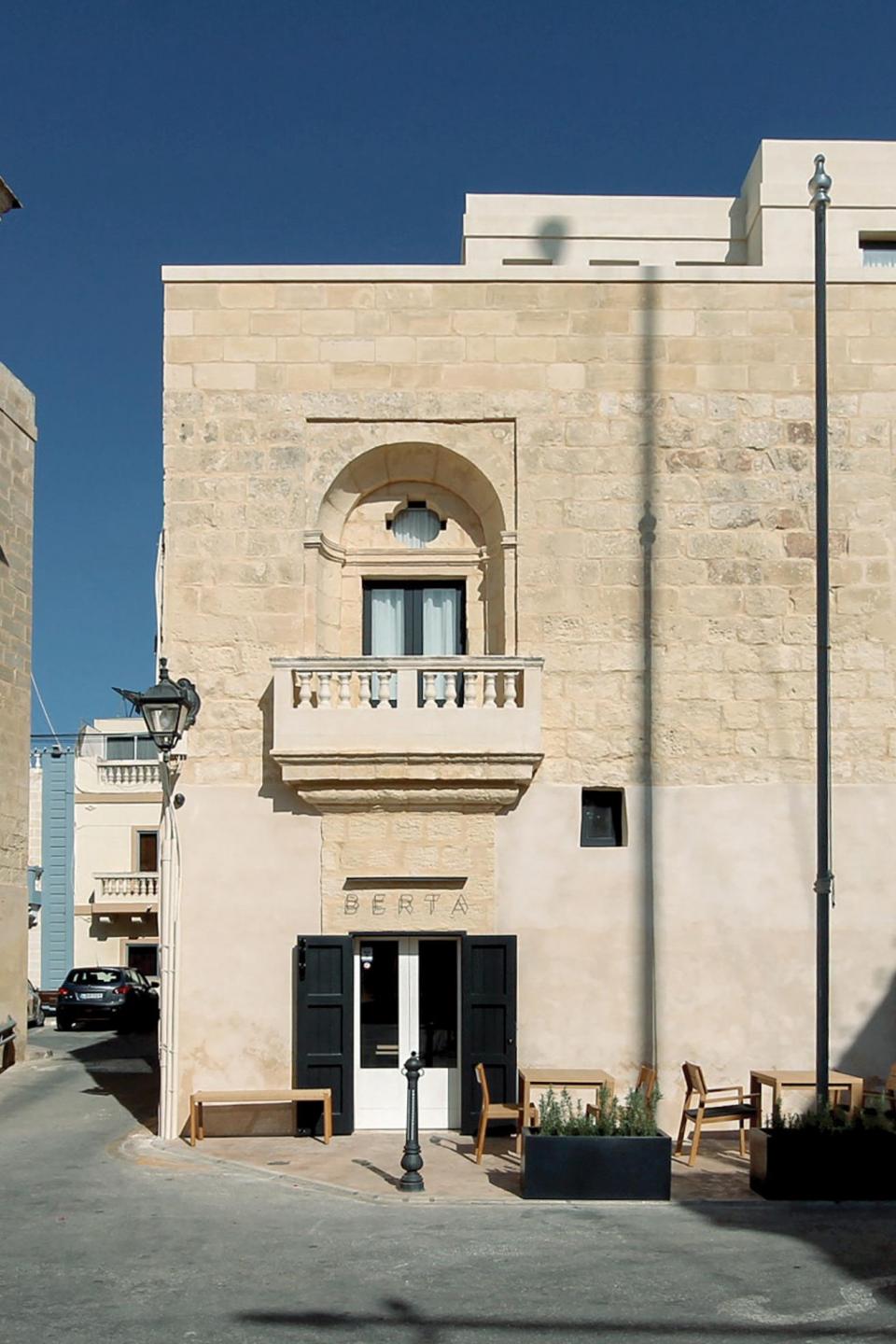 The Emerging Architect Award was given to perit Maurizio Ascione.

The President’s Award for outstanding achievement for services related to architecture and spatial planning was given posthumously to Joseph M. Spiteri. His son,  Stephen, received the award on behalf of his late father.

Perit Spiteri is well known for the design of the Santa Luċija government housing estate which, for its time, was an innovative housing planning model, various government schools and the President John F. Kennedy memorial. He was instrumental in the formation of several generations of architects, including Joseph Huntingford, Joseph Borg Grech, Joseph Consiglio and John Gambina, who made a major contribution to the evolution of Maltese modern architecture.

This year, the jury was composed of Planning Board chairperson Vincent Cassar; Milan-based architect Antonio Borghi; Sandro Debono, culture consultant at the Office of the President; Anthony Ellul, an urban planner and secretary of the Chamber of Planners; architect Wendy Jo Mifsud, lecturer at the University of Malta specialising in spatial planning; Conrad Thake, a local architect and well-known historian; architect Sumita Shinga, a lecturer at the University of Westminster, London and who has served on several RIBA committees for the last 25 years; and Ian Pritchard, CEO of the Architects Council of Europe.