Malta is vaccinating people against COVID-19 at a faster rate than most of its European Union peers, according to data collected by a global statistics website.

The data, which was last updated on Friday, states that 2.15 per cent of locals have received a vaccine dose, compared to 2.54 per cent of Danish residents.

Malta's calculation is based on a questionable assumption of the country's population being of just 441,539 people. According to the National Statistics Office’s most recent data, Malta’s population is much larger and stood at 514,564 people at the end of 2019.

Malta, however, still ranks second in the EU if the more updated NSO population figure is used to calculate COVID-19 vaccine doses per 100 people.

Using the NSO figure as a baseline, just over 1.8 per cent of the population has received a vaccine dose so far. Health authorities have said they expect that proportion to rise to more than 2.5 per cent by Monday.

Vaccinations reached EU member states in the last days of 2020 and national vaccination drives are still in their early stages.

People must receive two separate doses of the vaccine administered some weeks apart to ensure immunity to the virus. Healthcare workers, who were the first to be vaccinated, will start receiving their second vaccine doses next week. 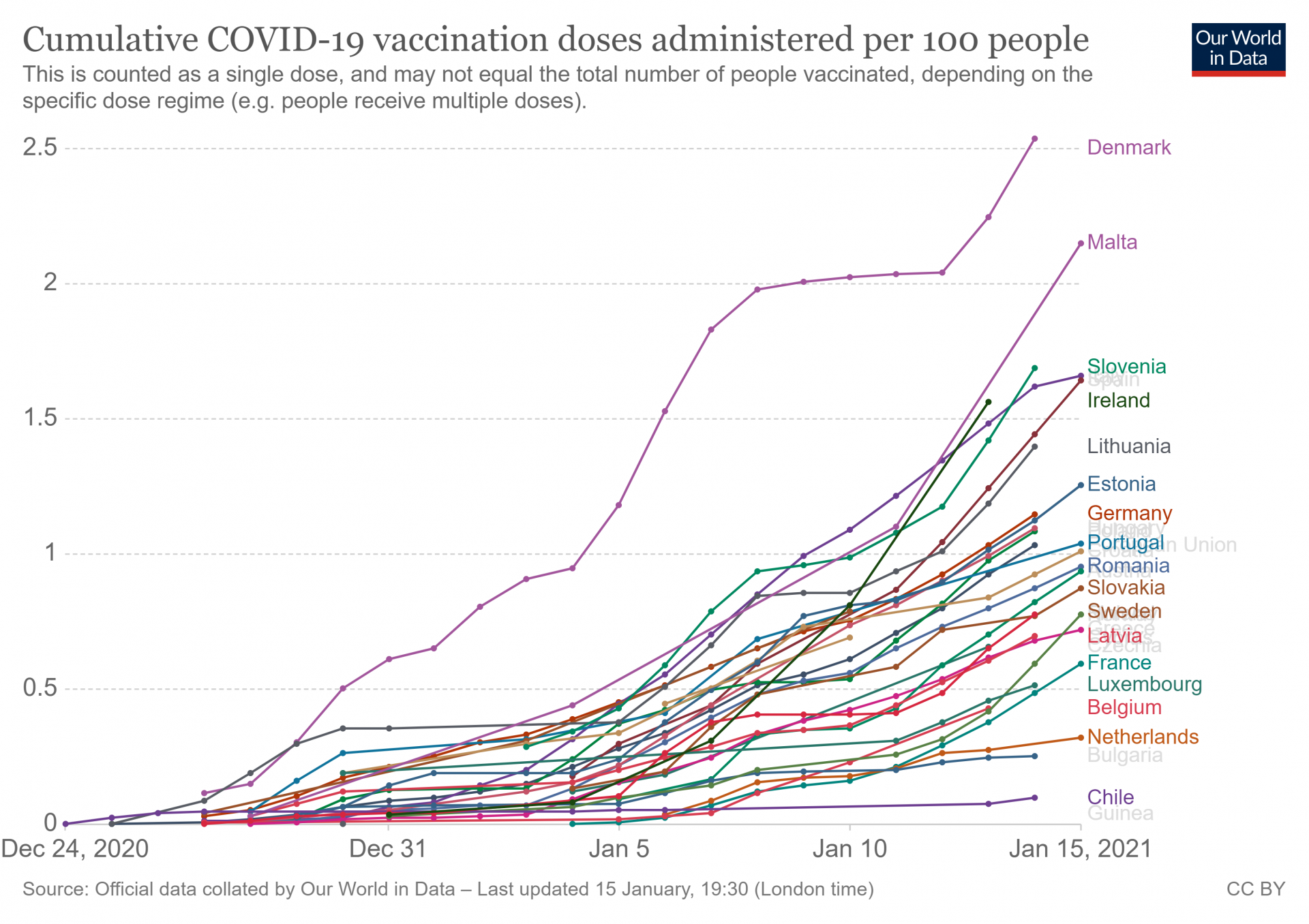 The Our World in Data calculations, which are based on official figures provided by member state governments.

Health Minister Chris Fearne was quick to highlight the Our World in Data findings, tweeting on Saturday morning that Malta’s COVID-19 vaccination effort was “second in Europe” and congratulating medical and administrative staff for their work.

While Malta ranks well compared to its European neighbours, EU member states continue to lag significantly behind the world’s leaders when it comes to quick rollout of the COVID-19 vaccine.

The United Kingdom, Bahrain and United Arab Emirates, for instance, are all vaccinating their populations at much faster rates than any EU member state. Israel remains the world's vaccine leader, having already given one in every four people at least one COVID-19 vaccine dose by Friday.

EU member states have banded together to jointly procure vaccines, with the EU Commission signing contracts with manufacturers and then distributing doses among member states.

Country leaders have however complained internally at EU level that they are receiving fewer vaccine doses than expected, Reuters reported on Friday.

The EU’s key vaccine supplier, Pfizer, said on Friday that it expected production to slow in late January as it made arrangements to ramp up production in February and March. EU Commission chief Ursula von der Leyen reacted to delays by saying the pharmaceutical company had assured her that first quarter production targets would be met.

EU member states are currently administering vaccines manufactured by Pfizer and Moderna. Approval for a third vaccine, made by AstraZeneca, would help ease supply issues and make it easier to speed up vaccine rollout. The European Medicines Authority is expected to issue a recommendation on the AstraZeneca vaccine at the end of January.

Locally, Fearne has faced criticism from doctors and nurses about vaccine rollout being overly slow. He has insisted that doses are being administered as quickly as they are received and that the limiting factor is vaccine supply.

Logistical problems have also plagued local rollout, with Times of Malta reporting that senior citizens aged 85 and over being forced to wait outside health centres for hours in the cold to receive their vaccine.

The nurses' union, MUMN, said on Saturday that the logistical problems were putting elderly, vulnerable people at risk and threatened to declare an industrial dispute unless security at healthcare centres was improved, patient lists were checked and the appointment system improved.

"Primary Health Care management has failed even on the basics of organising a proper vaccination strategy," the MUMN said in a statement.

Superintendent for Public Health Charmaine Gauci on Friday urged people to stick to their alloted appointment time, saying she had come across people who showed up for their vaccination hours early.