Malta has the lowest fertility rate in Europe, according to EU-wide data released on Tuesday.

Figures for 2017 published by Eurostat found that while France had the highest fertility rate of 1.9 babies per woman, Malta was at the very bottom of the list with 1.32 babies born on average for every woman.

Malta has long been at the lower end of the spectrum. In fact figures for 2016 had found the island was fourth from last for fertility.

The total fertility rate in the EU stood at 1.59 births per woman, compared with 1.6 the previous year.

Read: Malta needs to accept it has a fertility problem, says expert

The highest total fertility rate recorded in recent years was in 2010 when it reached 1.62, still below the replacement level, which is considered to be 2.1 live births per woman. 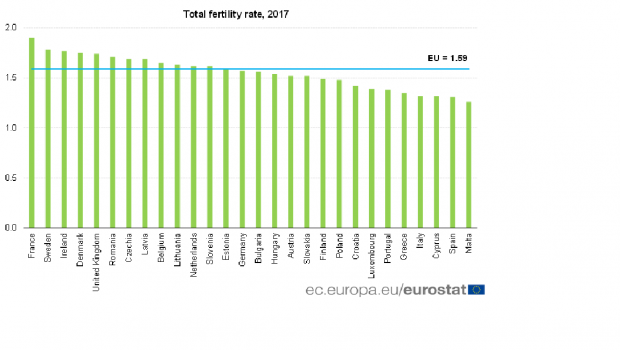 Malta is at the bottom of the list when it comes to having babies.

This information comes from recently published data by Eurostat, the statistical office of the EU.

A closer look at the figures for Malta show how 2,283 first born children were recorded in 2017.

Just 1.6 per cent were born to Maltese mothers who were over the age of 40.