Bishop Adeodatus Francis Micallef, who had served as bishop in Kuwait for a number of years, died this morning aged 89.

Bishop Micallef, of the Order of Discalced Carmelites, died at the Dar tal-Kleru in Birkirkara at 8am. 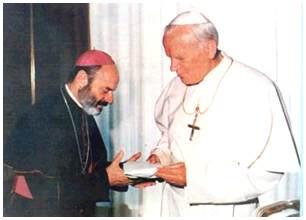 Born in Birkirkara, he joined the friars aged 19. He was appointed as third Vicar Apostolic of Kuwait in November 1981, an office and responsibility he reluctantly accepted. He was ordained Bishop by Pope John Paul II in January, 1982 taking charge of the Vicariate of Kuwait a few days later.

In Kuwait, Bishop Micallef served with great courage all Catholics and Christians, especially during the invasion and war years, during which he remained in Kuwait.

When the conflict was over, both the US troops and the Kuwaiti officials praised him for his courageous act.

His funeral will be held at St John’s Co-Cathedral in Valletta on Saturday at 9.30am.