Albert Satariano, 68, who was arrested in Italy last month as he was driving a van carrying more than 1,000 protected songbirds, had been linked to a major songbirds smuggling ring in 2018.

The birds were found in boxes stashed in secret compartments at the back of a van.

Satariano had featured heavily in wiretapped conversations played out in an Italian court case back in 2018, that saw an Italian bird trafficking ring dismantled.

In December 2018, a Calabrian court found eight people guilty of conspiracy to carry out illicit wildlife smuggling activities. Satariano was never charged in connection with the case.

The court documents submitted as part of the case had identified Satariano, as “one of the most prolific Maltese buyers of finches”.

The case was extensively reported in an expose' on illegal bird trade between Malta and Italy in the National Geographic the following year. 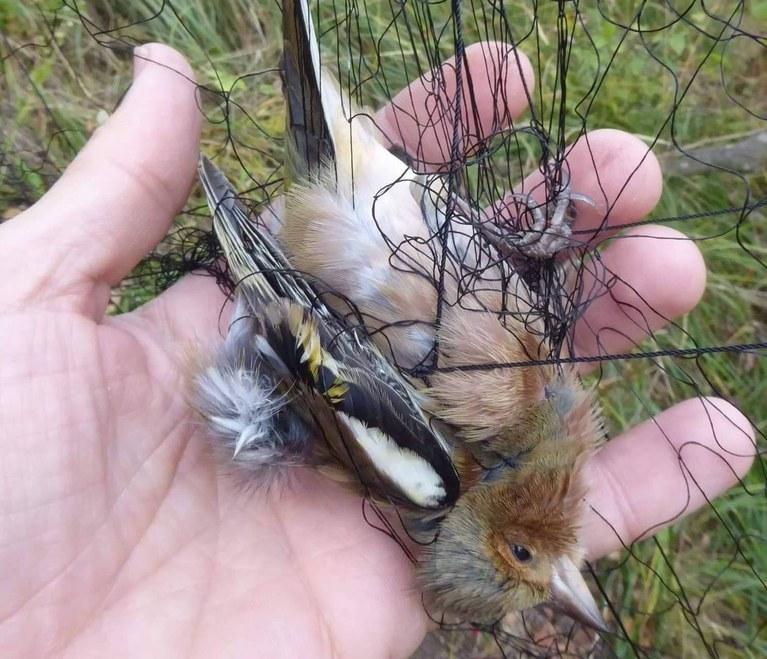 A finch caught in a Maltese trapper's net. Photo: Committee Against Bird Slaughter.

Satariano, a retired diamonds merchant, is a self-described trapping enthusiast.

Malta police sources on Monday told Times of Malta that they are monitoring the case and are in touch with their Italian counterparts.

Other sources said the Maltese police had received intelligence on Satariano's possible involvement in bird smuggling two years ago.

The trapping of finches has been banned in Malta since an EU court judgment in 2018.

However, last year the government allowed finch trapping, saying trappers would be helping to collect scientific data on bird migration as part of a study.

Back in 2018, Times of Malta had reported on the illegal songbird smuggling trade, in which specimens are sold to be used as live decoys for trappers.

There is no legal songbird trapping season in Malta, but trappers normally take to the fields next month. Sources said the birds discovered in Italy would have likely be destined from the small cages in trapping sites across the Maltese countryside.

A mention in a major anti-smuggling case

In 2018, Italian police had intercepted a series of telephone conversations between Satariano and a number of convicted Italian bird traffickers, which, according to documents submitted in court, were allegedly made to “agree on the quantity of live birds to trade and the manner in which to carry out the exchange.”

Court documents submitted in that case had alleged that Satariano had a series of encounters with members of the smuggling ring.

An investigation into passenger lists on the ferry from Malta to Italy, along with data from motorway toll booths, had, at the time, revealed that after Satariano travelled to the Sicilian port of Pozzallo, vehicles belonging to the smuggling groups were also detected there.

On one occasion, in late November 2016, after meeting with one convicted trafficker, Satariano was recorded by police asking about a “receipt” for a purchase.

In a subsequent conversation between the two, quantities of different bird species were given.

A few weeks later, police wiretapped another conversation, in which, they alleged, Satariano had talked about the challenges of getting birds to Malta after Italian customs official increased enforcement checks.

Satariano had at the time strongly denied being involved in acquiring birds smuggled from Italy.

February 1: A previous version of this report incorrectly stated that Satariano was arrested on Sunday.