An African man was attacked by a gang of 15 men, beaten, punched and thrown into the sea in Gozo, egged on by a cheering crowd from nearby catering establishments, according to a social media post.

The possible racially motivated attack on "a guy from Somalia" at Mġarr harbour in Gozo around 1am is being investigated by the police.

“After repeatedly beating him, he kept getting up trying to explain himself and they kept beating the pulp out of him relentlessly,” the post reads.

“At one point a ‘hero’ decided to show what a KING he was in front of a crowd of 100 cheering people, moved a dust bin, moved a table and to the disgusting roar of the horde he punched the guy from Somalia and threw him in the sea. At this point in time he hit his face with a boat.

“Not knowing if he could swim (he could have drowned), he pulled himself out embarrassed and humiliated and yet again tried to ask why they treated him like a dog.” 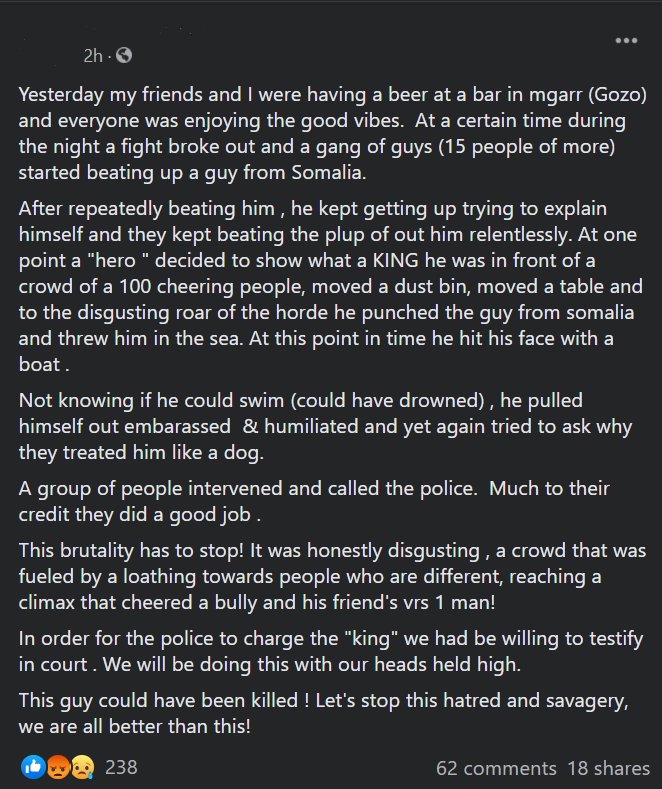 Police confirmed with Times of Malta that they were called to the Mġarr harbour at 1am to respond to reports of an argument. Currently two men, a Maltese and a foregin national are being interrogated by the police and charges will be pressed against both of them.

The spokesperson said one of the parties is alleging he was thrown into the sea and suffered slight injuries.

But the Facebook post appeared to give a somewhat different interpretation of events: “This brutality has to stop! It was honestly disgusting, a crowd that was fueled by a loathing towards people who are different, reaching a climax that cheered a bully and his friends vs one man!

“In order for the police to charge the ‘king’ we had to be willing to testify in court. We will be doing this with our heads held high. This guy could have been killed! Let's stop this hatred and savagery, we are all better than this!”