Police Assistant Commissioner Silvio Valletta said this evening that Pietru Cassar, 68, who was murdered in Zejtun this afternoon, had been hit in the neck and chest by shots fired at close range from a 9mm weapon.

Asked at a press conference whether the murder was being linked to other murders which took place in the past few months he said: "These were not indiscriminate shootings. They may be linked, and the police are investigating all avenues."

However he refused to specify if Mr Cassar had been interviewed by the police in connection with Paul Degabriele (Is-Suldat) who was shot dead in Marsa in May after a bomb which was placed under his truck a few months previously failed to go off. He too was shot with a 9mm gun.

Mr Valletta said that at least three shots were fired at Mr Cassar, who had been in his garage in Triq Sta Marija, Zejtiun. He managed to stumble out and collapsed a few metres away on a doorstep.

It was not yet clear to the police if one person or more were involved in the shooting.

Mr Valletta appealed for anyone having information to contact the police in confidence on telephone 119.

Pietru Cassar, who was well known to the police, was shot at about 2 p.m.

In October last year he was briefly remanded in custody after having been accused of having explosive material, small arms, ammunition and booby trap equipment in his garage in the same street.

Mr Cassar faced a total of 20 charges including the unlawful possession of explosives, two unlicensed pistols, a machine-gun and an air gun as well as a large bomb - possibly an World War II aerial bomb. He claimed he had the weapons for self-defence.

This afternoon, bomb disposal experts joined other investigators, some two hours after the murder took place.

Police dogs were also taken to the scene. Investigations and searches continued after the corpse was removed in a police hearse.

This was the third murder in the space of a week, after a man was shot outside his apartment in Marsa on Wednesday last week and a young Serbian man was fatally stabbed in Qawra early yesterday. 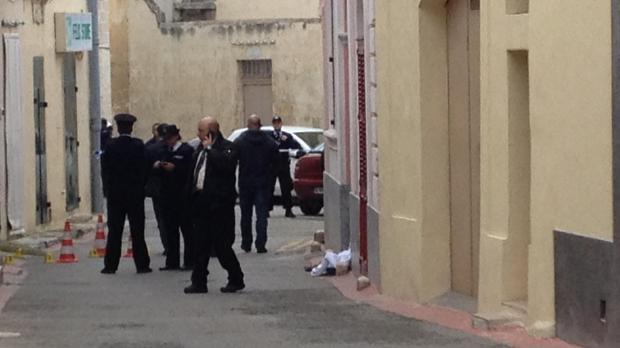