Updated 9.24 with NGOs' call for an inquiry

A number of migrants charged over their involvement in a riot at Ħal Far last week were manhandled, packed like sardines in a cell, locked up all day and humiliated.

Two separate sources said the migrants were manhandled in prison by members of the Special Response Team, who also used batons. Some prison warders, also known as correctional officers, were reportedly also involved. In a reaction last night, the Correctional Services Agency of Corradino “strongly denied” the allegations.

“The 107 migrants who were admitted this week were all registered, showered, clothed with clean clothes, visited by the medi­cal doctor and fed – that is the same treatment [as] all other inmates. They are now carrying out a normal prison routine until their sentence is terminated or they are released by court order,” Randolph Spiteri, Chief Operations Officer, told The Sunday Times of Malta.

He later added there was “no use of force other than the minimum required to control and restrain”.

When contacted, Home Affairs Minister Michael Farrugia said: “Like any other claim there will be an investigation. I will not rely on a report or just a denial.”

But the sources stood by their claims and said the migrants were subjected to humilia­ting treatment upon their arrival in jail from court on Wednesday and Thursday when they were ordered to strip off their clothes in the central courtyard and hosed down with a pipe “like animals”.

The sources said a number of the prison’s authorities were present for both the mass shower and the “manhandling” in Division Six of the prison. Sources said the mi­grants were then given an orange boiler suit to wear and locked inside Division Six, which has 24 cells. The division usually takes no more than 30 to 40 prisoners.

Each cell has one bed but each is holding between five and eight migrants. They are not being allowed to wear the shoes they wore when they arrived in prison and are spending their day barefoot, the sources said.

The migrants, who include those who pleaded guilty to their involvement in the riot and sentenced to six weeks in jail, were given minimal water to drink. The only thing they were being given to eat is a bread roll filled with coleslaw in the evening.

The sources close to Corradino Correctional Facility said the migrants are being kept locked up for the entire day and barred from leaving their cells, though the conditions appeared to have been relaxed yesterday afternoon.

According to prison rules, a prisoner cannot be locked up for 24 hours but has to spend at least one hour in the open air, even those who are usually in solitary confinement. 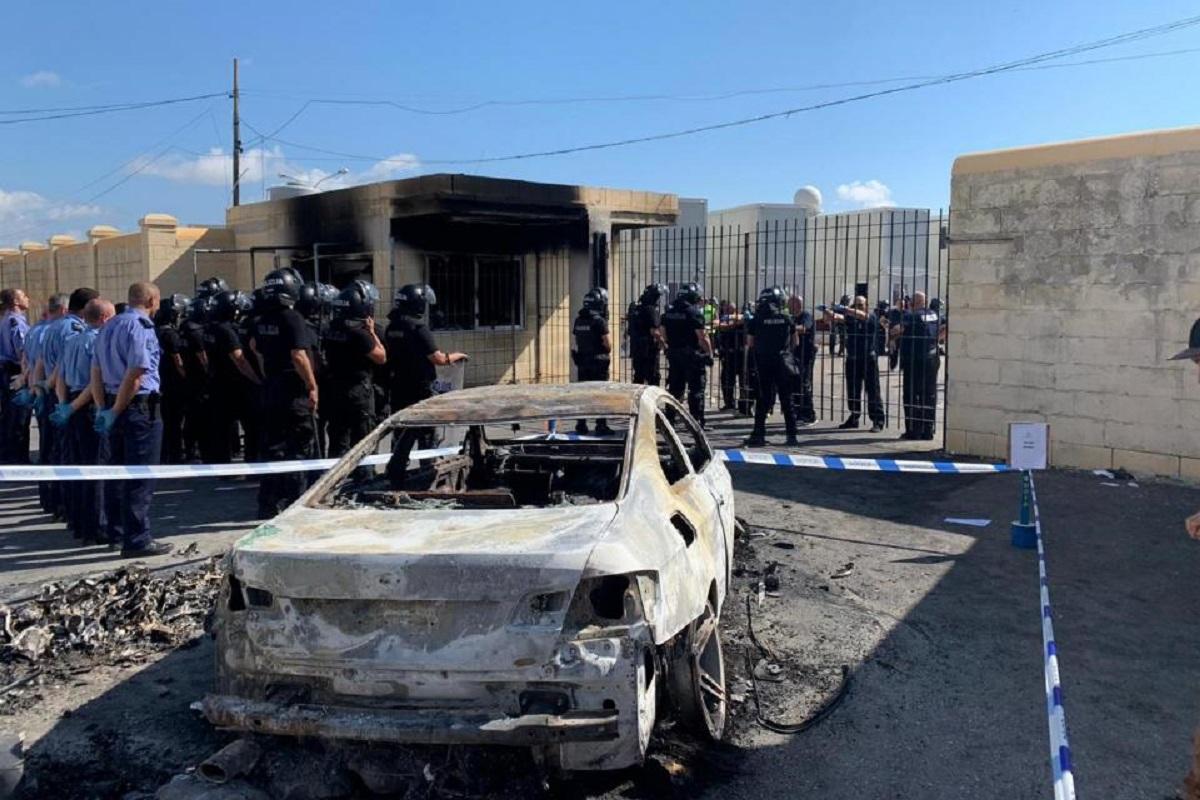 Riot police at the open centre in Hal Far, where several cars were torched.

The mass riot on Sunday to Monday night caused substantial damage to the open centre in Ħal Far, which was reportedly sparked by a row between security and three residents who were not allowed to enter because they were drunk.

Fires were started and there were reports of stones being thrown at staff who manage the so-called ‘tent village’.

Five cars and a container that housed the administration facility were torched and confidential documents were strewn around. A police car was also damaged.

Hours after the riot, the police swooped in and arrested 107 people who they then charged in court.

NGOs call for an inquiry

In a reaction, NGOs that work among migrants expressed concern about the situation at Corradino and called for an inquiry.

"If confirmed, this news is horrific. It raises a very serious alarm as to the security of the 107 men. The manner in which they were taken to court was already cause for serious concerns. Yet these fresh allegations demand a full inquiry to ascertain the facts, with consequences should any wrong-doing be confirmed," they said.

They called on the authorities to ensure the security of all inmates and prevent such incidents.

They also urged the police to investigate since, if confirmed, these allegations amounted to very serious hate crimes.