The 2018-19 season may be in mid-point but for tomorrow’s showdown between neighbouring rivals Gżira United and Sliema Wanderers could have a significant impact on both club’s ambition  for the rest of the campaign.

In the opening weeks of the season, both Sliema and Gżira were tipped by many to be among the leading candidates to challenge for a prime role in this season’s BOV Premier League title race. 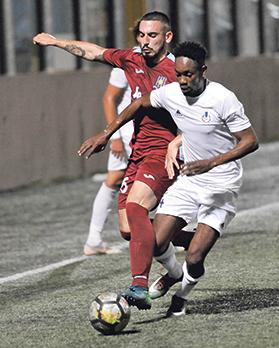 However, in the last few weeks both the Maroons and the Wanderers have struggled to keep up their early consistency and tomorrow’s derby could have a significant effect on their aspirations this season.

Gżira are currently just one point adrift of Premier League pacesetters Valletta and Hibernians and well placed to challenge for what could be an historic league title.

However, their current run of form has surely left some cause for concern for coach Darren Abdilla and the Gżira hierarchy as the team is struggling for victories as the only have drawn five of their last seven matches.

This month, Gżira have continued to invest heavily in their squad with the signings of wing back Myles Beerman, midfielder Gianmarco Conti and striking duo Justin Mengolo and Sofian Domoraud while they are still awaiting the return from injury of their chief striker Amadou Samb.

Tomorrow, they face a Sliema side who will be hurting from their elimination from the FA Trophy at the expense of Mosta and coach Darren Abdilla told the Times of Malta that he is wary of facing a more motivated Sliema side.

“We have already had a taste of facing a team just after they changed their coach when we took on Floriana late last year and we found it very tough to take all three points,” Abdilla said.

“With Ivan Woods in charge I don’t expect to see too many tactical changes from Sliema but surely he will surely make sure that his players are well motivated to deliver after experiencing the disappointment of going out of the FA Trophy.

“This match is also a derby and I am sure that Sliema will surely not be happy to see a club, who was a feeder club to them in the past, having the edge over them tomorrow. So I expect a tough challenge.”

Abdilla said that his team’s run of form is a little cause of concern for him but he is hopeful that the players that joined the club in January will soon gel well with their team-mates.

“It’s normal for those players who have joined our club this month that they need time to settle,” Abdilla said.

“I was disappointed with our performances in the last few weeks but hopefully things will start to change as from this weekend.

“The match against Sliema Wanderers is the first of three crucial matches that will define whether we can continue to challenge for the top positions or not. After Sliema, we have Hibernians and Birkirkara so these matches will be decisive and I expect the players to show their hunger and ambition during the next three matches.”

Sliema, after the departure of coach John Buttigieg, will be other the charge of assistant coach Ivan Woods.

For the former Sliema striker this will not be the first time that he finds himself leading the Wanderers after a coaching change as he had filled a similar role when Stephen Azzopardi had left the club a few years ago.

Woods admitted that the last few days have been quite difficult at the club to try and lift the players’ morale following their cup elimination and said that the players needed to take their responsibities for the team’s struggles of late and try and bounce back in style.

“Unfortunately, after the Christmas break the team struggled to repeat the form of the first part of  the season when we had managed to beat teams such as Valletta and Floriana,” Woods said.

“The elimination from the FA Trophy, on which the club had put a lot of emphasis to try and return to European football, was a big blow and the club felt that something had to change and they came to an agreement to part ways with John Buttigieg.

“But if the team is in this situation is not only the responsibility of our former coach but the players have to carry some of the blame as well. Tomorrow’s match against Gżira is a perfect opportunity for the players to show that they deserve to don the Sliema shirt.”

Woods cannot field his strongest formation tomorrow as defender Goran Adamovic and Claudio Pani are both ruled out by suspension, Ryan Fenech and Alex Muscat have just returned to training from a long injury while Jean Paul Farrugia is still unavailable.

Striker Ignacio Varela could make his debut for Sliema after joining on loan for Floriana as a replacement for Brazilian forward Jefferson who joined Nadur on loan.

Woods said that despite the recent struggles not all is lost for the Wanderers and said that a win over Gżira could put the team back in the fight for a top four position.

“Despite our Trophy exit our season is far from over as we have still one door through which we can reach European football... a top four finish in the league,” Woods said.

“We may be in seventh place, but the gap in the top half in the standings is so close that with one win you can quickly find yourself back in the fight.

“I expect my players to take this opportunity with both hands and ensure we rediscover our best form against Sliema.