Sunday Mass attendance is projected to decline further over the coming years until it sinks to only 10 per cent of Malta’s Catholic population by 2040.

The figure emerges from the Malta Sunday Mass Attendance Census 2017, which has just been published, giving raw data that includes detailed statistics such as attendance by age, parish, gender and level of education. It did not include Gozo.

Headline figures were announced last April, putting Mass attendance on December 2 and 3, 2017, at just under 37 per cent of a Catholic population that leaves out those under seven years of age or who could not attend due to illness.

Taken every 10 years, five such censuses have been carried out so far by Discern, the Institute for Research on the Sign of the Times.

In a foreword to the publication, Rev. Joe Inguanez, the chairman of Discern, acknowledges the “regularly falling” Sunday Mass attendance and stresses the need for renewal of the liturgy “so that leavers and absentees will return to Sunday Mass”.

He concluded with a plea for Jesus to help the Maltese Church “read the sign of the times and act quickly according to His Holy will”.

Attracting younger people to Mass is a losing battle, according to the census, which confirms the perception that those who adhere to the Sunday Mass obligation under Church law are an aging population.

Well over half of the attendees were over 50 years old. A drop in attendance was seen across all age groups with the exception of those aged 65 and over. However, the younger generations are staying away in droves. According to the data, the number of Catholic youngsters up to 14 who go to Sunday Mass has halved from 42 per cent in 2005 to a mere 22 per cent in 2017. The figure is even worse for those in the slightly older cohort: a drop from 40 per cent to 19 per cent among those aged 15 to 24.

Attendance declined in all 70 parishes with the exception of Manikata, Dingli and Fleur-de-Lys, the census found.

It was noted that parishes with higher attendance rates were likely to have higher numbers of younger people going to church while attendees tended to be older in parishes with low rates.

The census also identified a trend that saw residents leaving their parish to attend Mass elsewhere. 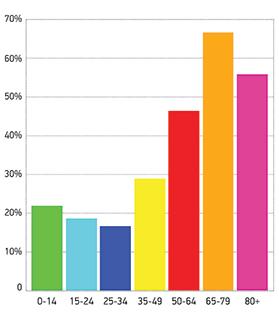 Sunday Mass attendence as percentage of Catholic population in each cohort.

Those who attend Mass on a Saturday rose by 1.8 percentage points from 2005. In fact, nearly one third of attendees preferred Saturday Mass to Sunday.

Saturday also seems attractive to the younger age groups, with 36.3 per cent of those attending at 8pm falling within this age bracket. However, 80 per cent of Saturday attendees preferred the 5pm to 6.30pm time slots, while the most popular on Sunday morning was the 11 o’clock Mass.

Meanwhile, the Archdiocese also carried out a survey, conducted by Misco, on people’s views on faith, religion and Catholicism, conducted among a random sample of 1,000 respondents between December 4 and 8, 2017 aged 16 and over.

Main findings:
▪ 95% believe in God
▪ 92% believe they are Catholic
▪ 69% would become baptised today
▪ 61% consider religion to be very important
▪ 64% believe there is life after death
▪ 37% state that one must follow a religion if one believes in God