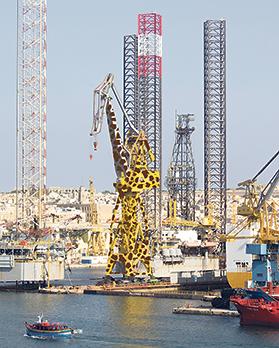 The artist’s impression of the Grand Harbour crane after its transformation. Photo provided by James Micallef Grimaud

Nature, or rather a version of it, is being reintroduced at Dock Six in the Cottonera as artist James Micallef Grimaud transforms a shipyard crane into a giraffe.

Forming part of a wider exhibition called The Island Is What the Sea Surrounds, the crane at what is known as the Red China dock is being spray-painted to look like a giraffe.

Towering over the dock below Corradino Hill, the giraffe is intended to act as a reminder of the country’s link with the African continent, with Malta being positioned right between Europe and Africa.

Meanwhile, dressing up the crane as a giraffe makes the bulky machinery look less of an eyesore. Mr Micallef Grimaud said people usually scanned landscapes by looking from left to right – in this case from the stark blue seas near the breakwater to the docks in the inner harbour area, where the cranes suddenly pop into view.

The concept has been long in the making, with the artist himself joking for years that from the Upper Barrakka Gardens, the cranes on the other side of the Grand Harbour look like giraffes.

Looking at the artist’s impression of the crane-turned-giraffe calls for reflection on how one might reverse man’s manipulation of the land and reintroduce nature into developed landscapes.

Curated by Maren Richter and running from March 10 to July 1, The Island Is What the Sea Surrounds, or Dal-Baħar Madwarha, is a visual arts exhibition mounted on behalf of Valletta 2018 – European Capital of Culture.

It includes an indoor exhibition and interventions in public space, among other work, and aims to explore Malta’s relationship with its closest neighbour – the Mediterranean Sea.

Palumbo Malta Shipyard general manager Joseph Calleja said the company was excited to play a part in the V18 activities, “especially since the history of the Grand Harbour has always been intimately linked to maritime business and to shipbuilding”.