Those readers familiar with the name of Maxim Gauci (1776-1854), the artist of Maltese origin, will most likely be familiar with his comprehensive and highly esteemed lithographic oeuvre.

After many years studying and working abroad, Gauci eventually settled in London in 1809. He arrived at an opportune moment just as the newly established medium of lithography was gaining popularity, and Gauci was able to utilise his artistic skills in developing and perfecting the medium. His botanical prints are works of consummate delicacy which nowadays command high prices.

However, it is not his lithographic work that will be examined here but his work in miniature portrait painting, which has, up till now, been the subject of some conjecture and speculation. A recently discovered set of miniature portraits of the Bonaparte family, together with current scholarship, have combined to established that while Gauci was resident in Paris, immediately prior to his departure for London, he was associated with the highest echelon of French miniature portrait painters.

The set of four miniature paintings mentioned above are mounted in an exuberant carved gilded frame. The miniatures are arranged in a diamond pattern with the letter ‘N’ surmounted by a crown at the centre. At the apex of the arrangement is the portrait of the Emperor Napoleon 1 (1769-1821); below him are those of Pauline Bonaparte (Napoleon’s sister, later Pauline Borghese, 1780-1825) and Letizia Bonaparte (Napoleon’s mother, 1750-1836), known more commonly after the proclamation of the Empire as “Madame Mère”. At the base is Napoleon’s first wife, Empress Joséphine (1763-1814).

Napoleon’s portrait bears the signature and partial date ‘Gauci, 1807’; a handwritten note on the verso of the portrait of Pauline states that the portrait was painted in Paris by Mr Gauci on 25 [month indecipherable] 1807. The portrait of Madame Mère shows just the intertwined initials ‘GM’. Empress Joséphine’s portrait displays no indication of authorship. Pauline’s portrait is octagonal, the other three oval; the painting medium of all four is watercolour on ivory. 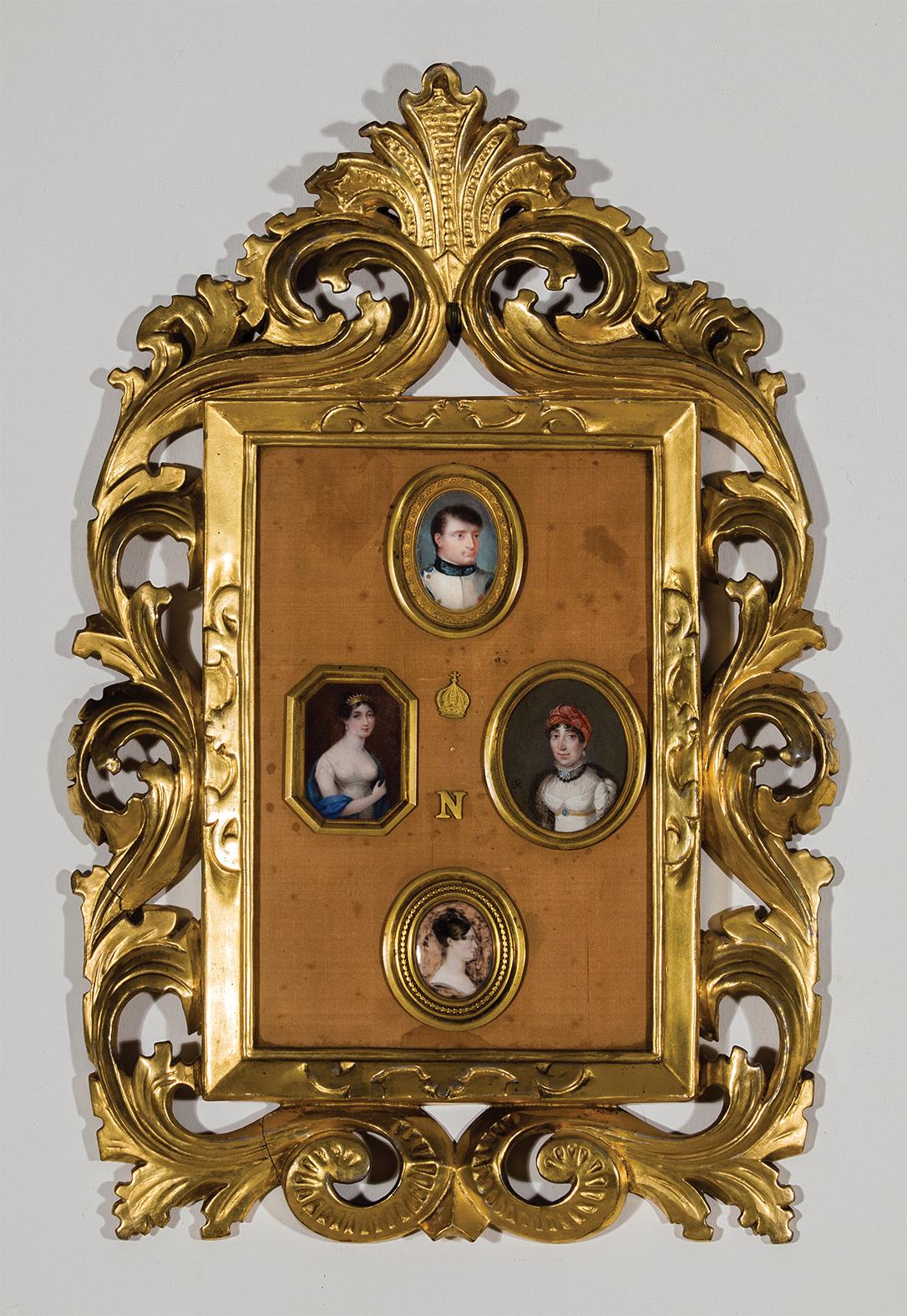 From the above it is evident that three of the portraits were executed by Maxim Gauci, with the fourth, while also likely to be by the same artist, cannot be proven conclusively. However, what is highly significant, as will be demonstrated here, is that two of the portraits were painted in 1807.

Equally important in the unravelling of this story is the milieu in which these portraits were painted, and for this the author is grateful to Prof. Cyril Lécosse for his research into the life and works of Jean-Baptiste Isabey. Particular reference in the research for this article has been made to the Lécosse’s 2018 publication Jean-Baptiste Isabey: petits portraits et grands desseins.

Lécosse explains that as far back as 1715, miniature portraits, generally set into small decorative boxes, were used as diplomatic gifts by French kings. Although this practice was suspended during the Revolution, it was revived under the Consulate. As First Consul, and later as Emperor of France, Napoleon sought to legitimise his new imperial house by adopting the trappings of former royal dynasties; hence the wholesale adoption of pomp and ceremony, elaborate court uniforms, and portraiture – particularly miniature portraiture. Napoleon had neither the time nor patience to pose for a plethora of artists so an official court painter was appointed and his studio would produce a number of versions of the official portrait. Jacques-Louis David (1784-1825) was probably the best known of Napoleon’s court painters who in his time produced some of the most iconic portraits of the Emperor.

In the sphere of miniature portraits, the most sought after artist was Jean-Baptiste Isabey (1767-1855), who before the Revolution had been miniature painter to Queen Marie Antoinette, and continued, for the reasons stated above, to be patronised by Joséphine as well as Napoleon.

Due to Napoleon’s reluctance to pose for portraits, the emperor approved a typical pose, generally three-quarter length, with the sitter looking to the viewer’s right; artists would produce variations of this standard pose where only the uniform would vary.

From 1806, the production of portraits was overseen by Geraud Duroc, Grand Marechal du Palais; however, the actual production of the miniatures was left to Isabey, who set up a special workshop ‘de repliques’ (reproductions) where Isabey would paint just the faces or add some finishing touches but would often just sign off on an already completed work. The remuneration provided by the Grand Marechal for Isabey’s miniature portraits, prior to 1807, was 500 francs, so this set-up clearly provided Isabey with a lucrative business. 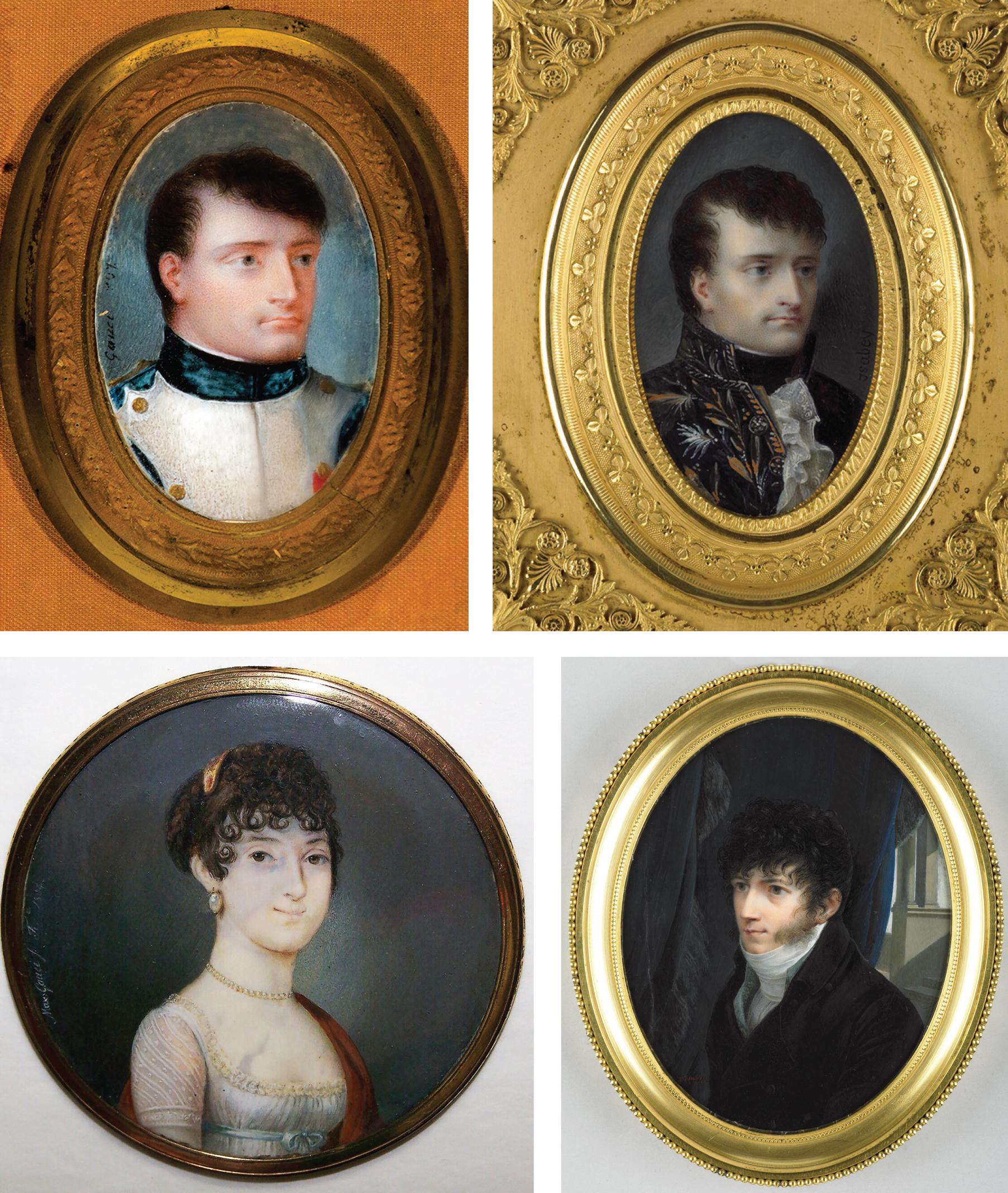 Between 1804 and 1807, Isabey supplied Duroc with approximately 100 miniatures; however, in 1807 the demand skyrocketed and the production of miniatures took on a quasi-industrial dimension.

To give an idea of the demand placed on Isabey, it is recorded that immediately after the Treaties of Tilsit (July 1807), Napoleon ordered 80 portraits from Isabey in August and a further 50 the following month. Unfortunately, as the number of orders escalated, the quality dropped, to such an extent that some of the miniatures supplied by Isabey were rejected due to their stiffness of pose or disproportionate body parts.

Concerned, Duroc took decisive action and organised a form of competition: he summoned several miniature painters to execute 40 portraits of the Emperor and he stipulated that only works of quality would be retained.

By taking this step, Duroc sought to achieve a number of objectives. The most important was to weaken Isabey’s quasi-monopolistic hold on the production and thus to shake him out of his complacency. Isabey seemed to be preoccupied with maximising his monetary reward at the expense of quality. Therefore, opening up the supply threatened Isabey’s stream of revenue.

Equally important was that by inviting some of Isabey’s former pupils to submit portraits, a healthier competitive spirit would be achieved with the added benefit of enhancing the reputation of these other artists and giving them the opportunity to earn better money. To further enhance competitiveness, Duroc raised the fee for each portrait to 600 francs.

Lécosse informs us that as a result of this competition, the number of artists producing miniatures increased towards the end of 1807, and that in February the following year, Gauci’s name was to be found on the official ledgers. Lécosse suggests that Gauci was one of the artists working in Isabey’s studio even prior to Duroc’s competition.

Given the apparent variation in the quality of miniature portraits around 1807, it is instructive to review the range of product attributed to both Isabey and Gauci as any similarities in style would help support the link between the two artists. Space does not allow for an extensive comparison; however, two works from each artist have been chosen to prove a point.

At the highest end of Isabey’s finest miniatures is the self-portrait shown here. This portrait is delicate, refined, well-proportioned and naturalistic. By contrast, the portrait of Napoleon (also included here) by, or at least attributed to Isabey, is cruder and more stylised. Both of these miniatures are displayed in the Wallace Collection on London’s Manchester Square.

The Wallace Collection contains a stunning collection of world-class works of art and is well worth a visit. As an added bonus, entry to the museum is free. Moreover, the collection includes one of the finest collections of Isabey miniature portraits outside France.

Gauci’s portrait of Napoleon included in the framed set illustrated here is of comparable quality to the above-mentioned example by Isabey; it is similarly stylised and less representational. It is important to note that since few artists had the opportunity of painting Napoleon from life, Duroc had instructed miniaturists to attach less importance to a perfect semblance but to go for an idealised form of beauty. Thus, a certain amount of licence was permitted.

By contrast, if we consider Gauci’s portrait of a woman in Empire-style dress, dated 1804, this seems more refined and naturalistic, and thus demonstrates the higher end of the quality spectrum that Gauci was capable of; not quite in the same league as Isabey’s finest work but commendable nonetheless.

Following Gauci’s death on the  November 3, 1854, many British newspapers carrying the news of his demise referred to Gauci as “miniature painter extraordinary to the Emperor Napoleon 1”. Thanks to Cyril Lécosse’s detailed research, we now have conclusive evidence that Gauci was engaged in Isabey’s studio.

Whether the obituarists’ claims are strictly correct is up for discussion since this wording suggests he was the sole miniature painter to garner the emperor’s favour; they must have been mindful of the Latin phrase de mortuis nil nisi bonum dicendum est and gave him the benefit of the doubt.

That Gauci displayed the high level of skill in his early career as a miniature painter (which he continued even once he moved to London), as he demonstrated in his later lithographic work, can no longer be in doubt.

It is hoped that this article will initiate a reassessment of Gauci’s miniature portraiture as there are still many unanswered questions: when did Gauci first arrive in France? Who were his mentors? What caused him to leave Paris for London? And with regard to this set of four portraits: why were they painted? Were they Gauci’s submission to Duroc’s call for portraits?

The author wishes to thank Caroline Miggiani, Joseph Attard Tabone and Emmanuel Magro Conti for their valuable assistance in the research and writing of this article.

The unauthorised reproduction of images from this article is not permitted.