Passenger traffic through the airport in May was 18% below 2019 pre-COVID-19 levels, Malta International Aiport said on Monday.

It said that May was the second consecutive month to see more than 500,000 travellers.

554,820 passengers travelled through Malta International Airport last month, translating into a recovery of 82.3 per cent of pre-pandemic figures, as more travel requirements were lifted by the Maltese authorities. The majority of countries that are directly connected to Malta International Airport have now completely removed their travel requirements for passengers coming from a European Union or Schengen country. 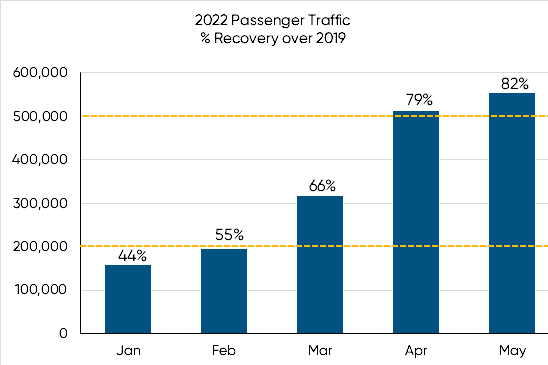 MIA said passenger traffic recovered in line with the recovery of seat capacity, which was at 81.2 per cent of 2019 levels.

Italy continued to lead the way in terms of market popularity, accounting for 121,120 passengers out of May’s total traffic. The United Kingdom, France, Germany and Poland also retained their rankings from the previous month.

MIA said that the most recent forecast for the industry was released by Eurocontrol last week. Its forecast for flight movements in Europe provides three recovery scenarios, each of which takes into account the impact of the war in Ukraine. The baseline scenario, which falls in between a more pessimistic and a more optimistic scenario, shows that a recovery to pre-pandemic figures will be achieved in 2024, in a scenario where passenger confidence continues to increase, staff shortages are controlled, and the increase of energy prices and other costs have a limited impact on people’s purchasing power.