A weeknight in Vittoriosa. A friend was running late to meet me and so I happily wandered aimlessly through Vittoriosa’s narrow alleyways. Down past the Inquisitor’s Palace and Main Gate Street soon opens up into the gorgeous Victory Square. And of all the buildings adorning this square, Palazzo Huesca housing the St Lawrence band club is queen. A late Victorian building, the wrought iron lattice work of the balconies and the spectacular fan-shaped window panes of the main wooden balcony all work to create an imposing, majestic facade – a facade that has only very recently been restored. It has been lit to great effect, in such a way that all the intricate masonry features are brought to life.

Over the years, the band club committee have been painstakingly restoring and curating the three-storey palace and its grand rooms. The necessary ground floor renovations proving far too costly resulted in these rooms being taken over by a private company and transformed into Bebirgu – a Belgian/Mediterranean bistro. I have always been enchanted by this building and decided to sit and eat there – any excuse to linger and my walk had made me peckish. At Bebirgu you are essentially sitting in the heart of Vittoriosa.

Taken over by the St Lawrence band club in the 1920s, the entire building must have been buzzing. 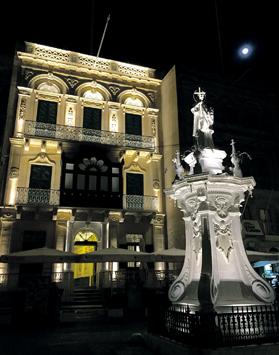 Tonight, understandably, the place was quiet but still provided a welcoming, almost soothing environment. I sat myself down in the cool, pretty courtyard at the far end of the building. Settled beside the trickling fountain and serenaded by the likes of Chet Baker and Sarah Vaughan, punctuated by the comforting clack of billiard balls coming from a room off the courtyard, I relaxed. I drank a cold Westmalle Tripel (difficult to find in Malta) and, in that pleasant atmosphere, I began to enjoy my own company and almost wished that friend would not turn up.

My friend did show and so did a complimentary appetizer- a mini croque-monsieur with ġbejna, topped with sundried tomato and basil. It was nice and the Belgian chef himself, donning a starched uniform and chef’s top hat, presented it to us. He seemed to want to set a tone of grandeur for what was to come. We ordered our first course – carrot soup for me and the chicken vol-au-vent for her. And what rot did come our way! My soup was a bland, dense mass of orange pulp, with little pools of liquid collecting at the bowl’s base. It usually doesn’t take much to get a carrot soup right!

The vol-au-vent could not have looked less appetising. It appeared to be something you might feed to a dog – and even that dog wouldn’t have been happy. You couldn’t even see the pastry! The filling overflowed well over the (supposedly crisp and light) pastry casing and smothered it so that all you could see was a disgusting heap of gelatinous mush that was meant to be creamy chicken and mushroom ragout. When you eventually unearthed the pastry, it was of course sodden and squelchy. This stellar dish is such a favourite with the chef that it’s offered as a starter and as a main course.

Even the dog wouldn’t have been happy

I was back to being overjoyed that, in the end, my friend had indeed showed up. I needed someone to help me wade through this fiasco of a meal. We dreaded what was to come.

The Belgian stew of beer and slow-cooked veal was badly burnt. The burning smell almost choked me on the first bite. The veal was tender but the bowl of gloop was inedible. Seeing our plates quite full, the chef came over to give a little speech about Maltese appetites and how all of us always require humongous portions. I managed a half smile, too afraid to upset him.

The very generous portion of pork schnitzel was thinly sliced and the breading had a nice crisp to it. Sadly, it lacked flavour but with some squeezes of lemon and salt, it was ok. The chips were mediocre at best.

Incidentally, are you a fan of red pepper berries? You’d better be if you eat at Bebirgu. The chef liberally sprinkles them over absolutely everything – from the appetiser to every single course that followed – and he is not stingy. Only the chips were saved this fate. Our taste buds were in a constant battle to distinguish between the bad tasting food and the overpowering nature of the berries.

The chef had absolutely no excuse for his catalogue of food fouls. The menu at Bebirgu is as concise as concise can get and there were only two other tables eating that night. One table sent their burgers back. In my opinion we had taken rather safe choices and I shuddered at the thought of what the mussels or fish must taste like, coming out of that kitchen.

Eyeing our barely touched chips and bowl of stew, our young, efficient waiter immediately asked if there were any problems. We tried to hide behind pained smiles but he insisted that if there were problems we had to complain and get the item taken off the bill.

His persistence was worrying. Informing the chef of his shortcomings was evidently not something new to this boy. Complaints are something he was very evidently prepared for. I repeat – worrying. Could I muster the courage to tell the chef, face to face, that his culinary skills left much to be desired?

I had a strong feeling that the chef was the sort of person who would instantly turn very unreasonable and fly off the handle, the moment his food was insulted. And so we kept our mouths shut. We couldn’t bear the thought of ordering another agonising course and so we left without any dessert. The food was cheap (thankfully) and so was the beer.

How on earth has this place reached third place on TripAdvisor, out of all restaurants in Birgu? Are there that many people who don’t know how to eat? Perhaps it’s time to bring the old, traditional każin bar back. I’d have been much happier with a hobża – but I would have missed my Westmalle.

I honestly wanted to love this place but the experience was very disenchanting. Palazzo Huesca was the only building in Victory Square to survive Word War II bombings and as lucky as this building was in surviving the onslaught, it has certainly been unlucky in its attachment to this ill-fated restaurant. The only thing going for them is the beautiful location and they are hardly making the most of it.