This world is the closed door,” writes Simone Weil in what became her Gravity and Grace. “It is a barrier. And at the same time, it is the way through.”

Everything somehow occurs in the space of the ‘between’ – a place informed by dualities. Things ‘in between’ are at once separated and connected, distanced and related. The space of the between is both dangerous and prosperous – a threshold bearing both positive and negative charges.

The exhibition In Between, currently on display at Spazju Kreattiv, is principally concerned with this liminal space, taking as its starting point the two parallel realities put into evidence by the COVID-19 pandemic. 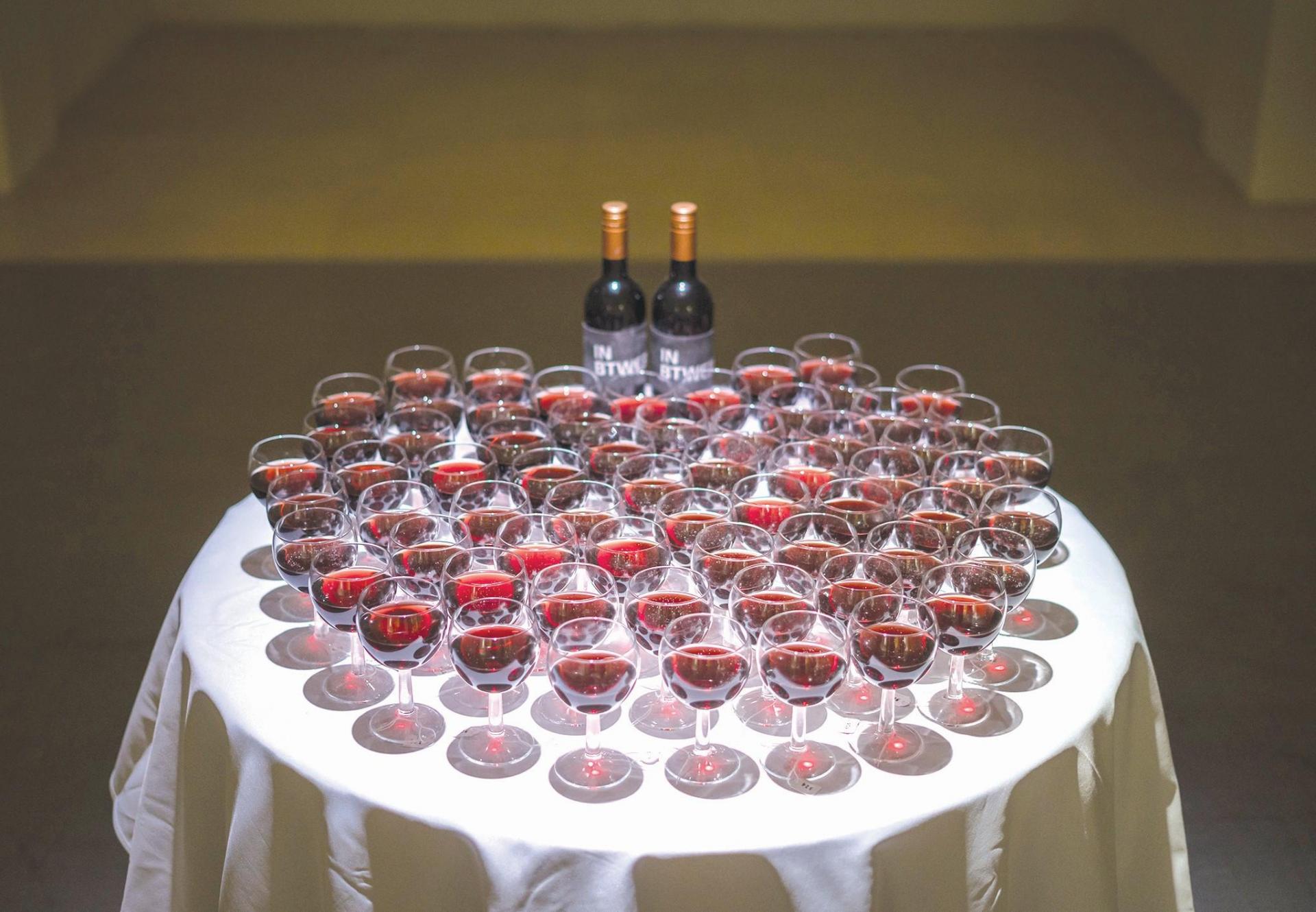 Wine glasses from the opening night, used in the performative installation 'What You Left Behind' by Matthew Schembri.

“Today, we have adjusted pretty well to living in two pa­rallel realities, where we both wear and don’t wear a protective mask,” writes Vince Briffa in his curatorial essay on the works of Thomas Scerri and Matthew Schembri, whose art composes the exhibition.

Indeed, COVID-19 has brought much attention to the face, especially due to the face coverings that have characterised this period, and also the pains we have taken to decipher the goings-on of a face concealed by these coverings.

The face is a prime locus of mediation, second only to the hands, which too have been curtailed in the pandemic days, limi­ting what we can touch and how. (That said, as Emmanuel Lévinas solidifies, we can never really touch what our hands reach for).

Briffa points out that when faced with a masked person, our perceptual systems complete the person’s face amodally – somehow filling in the blanks “as informed by the viewer’s perceptive baggage”. Here we come to see a manifestation of the diploid charges of the bet­ween space, which here is a space “at the threshold of fact and fabrication”. 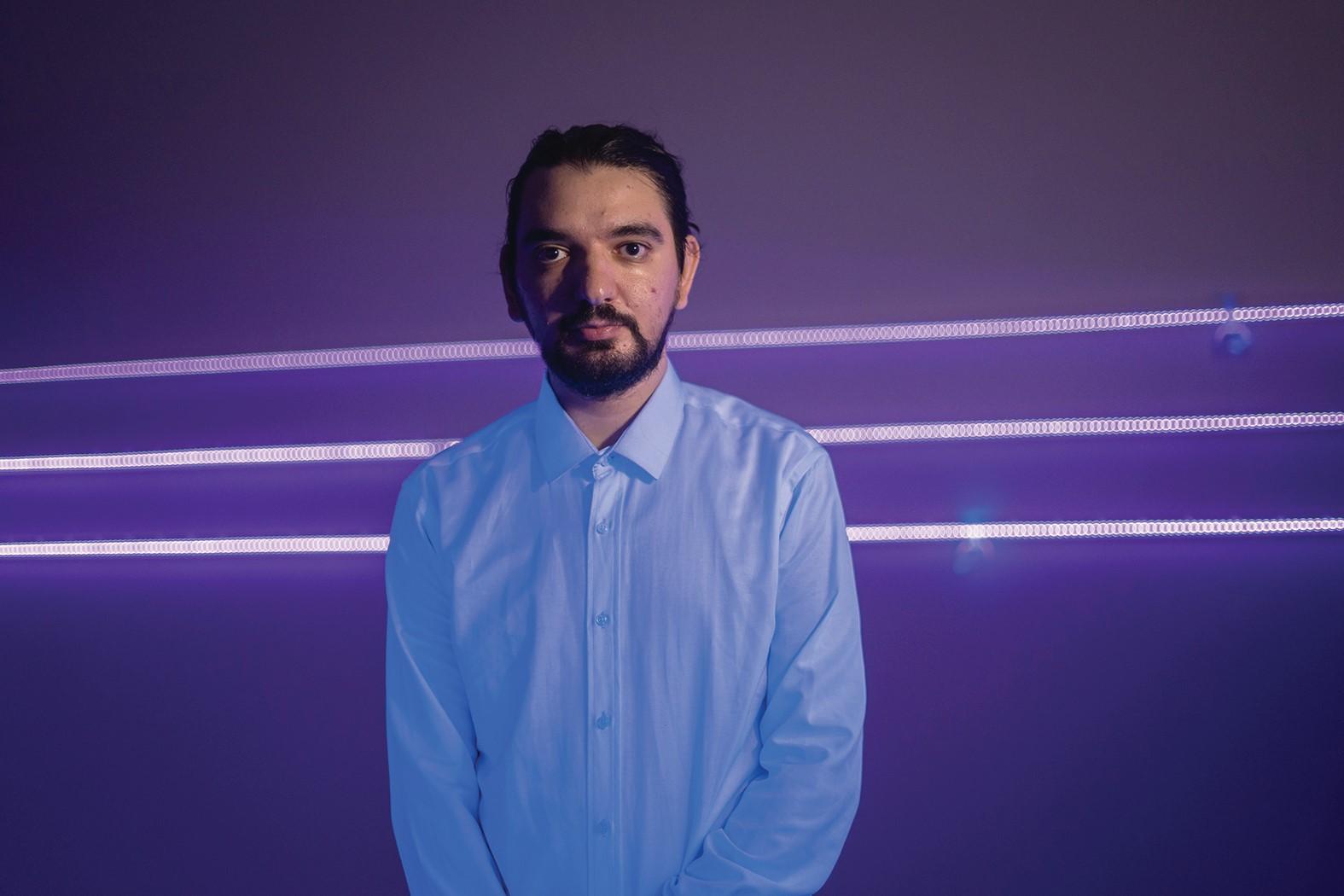 “It is in many ways similar to the central space of an artistic encounter,” explains Briffa, “a liminal space for meaning-making between the artist and the viewer and mediated through the artwork.”

The centrality of the viewer in the process of artistic creation is at the centre of Schembri’s performative installation What You Left Behind, whose main theme is that of touch, and focuses on the way we perceive virus contagion.

Spread across two rooms, viewers of the installation What You Left Behind are invited to enjoy a glass of red wine, leaving on it their inevitable traces. Placing this in another room under ultraviolet light reveals the result of their interaction.

“The work What You Left Behind makes us imagine what is not visually evident, as it shockingly unearths the hidden world of the transmission and infection of a virus through touch, and the perils at stake when we make social contact with others during public occasions,” writes Briffa.

The pandemic has emphasised both the positive and nega­tive charges of ‘between’ – whether through the anguish of being apart or the danger of being too close. 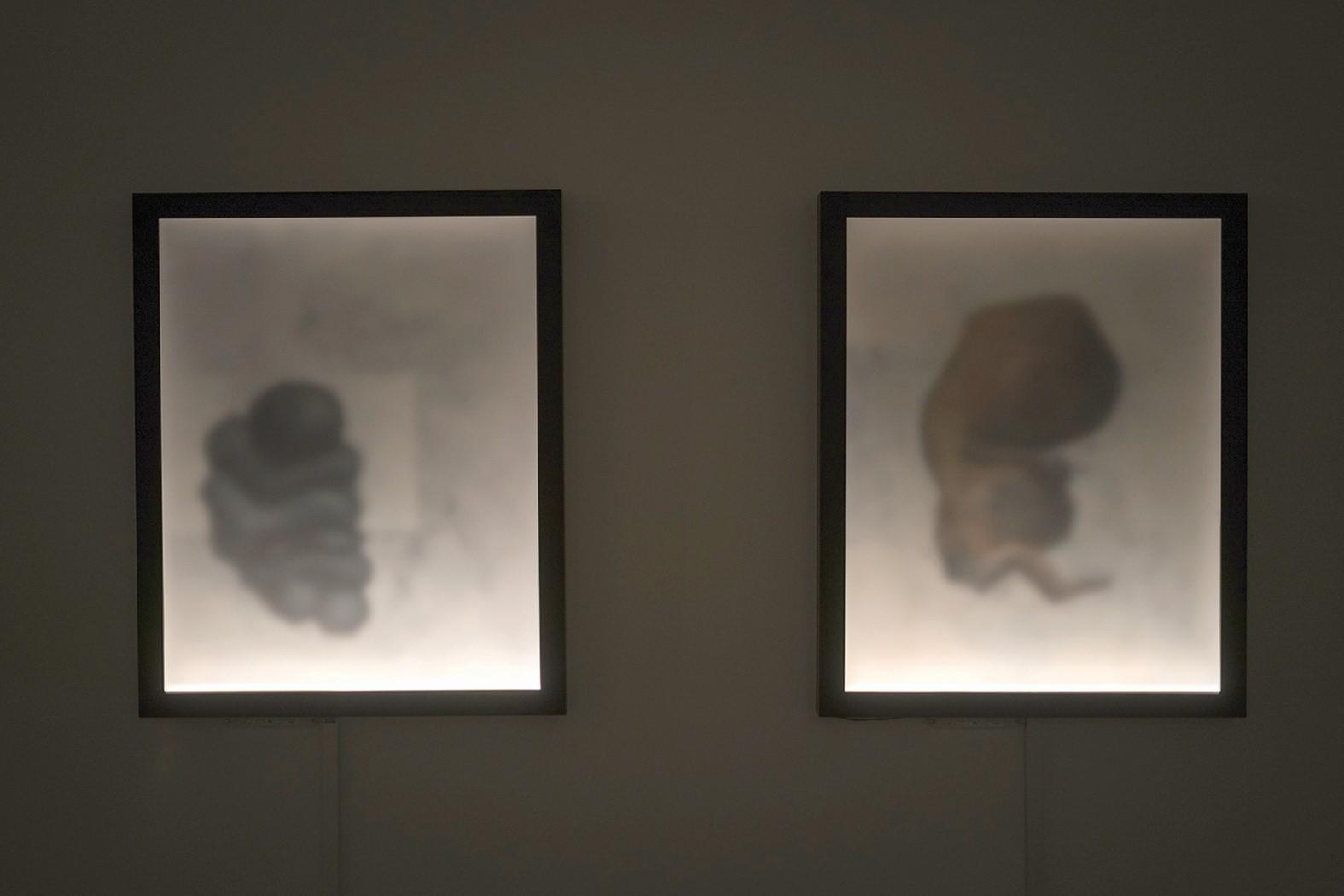 The liminal states before and after life are of prime concern in 'Materja' by Thomas Scerri.

“The installation What You Left Behind is a work that has many layers, mostly, I think, because the In Between exhibition was four years in the making,” says Schembri.

“Our plans for this exhibition, as part of the Shifting Contexts prize, started before the COVID-19 pandemic, were halted by it, and continued well afterwards. This fact has affected this work considerably.”

Speaking about the centrality of touch to the installation, the artist said that, post-COVID, this was a conscious decision because of the different perspectives induced by the pandemic.

First taking shape during the exhibition’s opening night, Schembri noted that the same argument can be applied to gatherings, specifically, in this case, those for artistic events.

“I was always amused by the importance given to art-related receptions, so I wanted to create something about this along the way.

“In Between provided this possibility, while the pandemic turned my amusement into something more interesting. Thus, on one layer, this work is an updated commentary about art-related receptions.”

This world, the realm of necessity, oﬀers us absolutely nothing except means- Simone Weil

The confronting nature of What You Left Behind seems to bring about a sense of vulnerability, which is itself common to every interaction – to be in relation with anything, whether an object or the other, we must contend with the effects (desired or unwelcome) of the object/person we are relating to across the chasm of the between. This is teeming both with possibility and danger in equal measure. The pandemic has put this danger front and centre – a danger many have chosen to accept to live a ‘normal’ life. 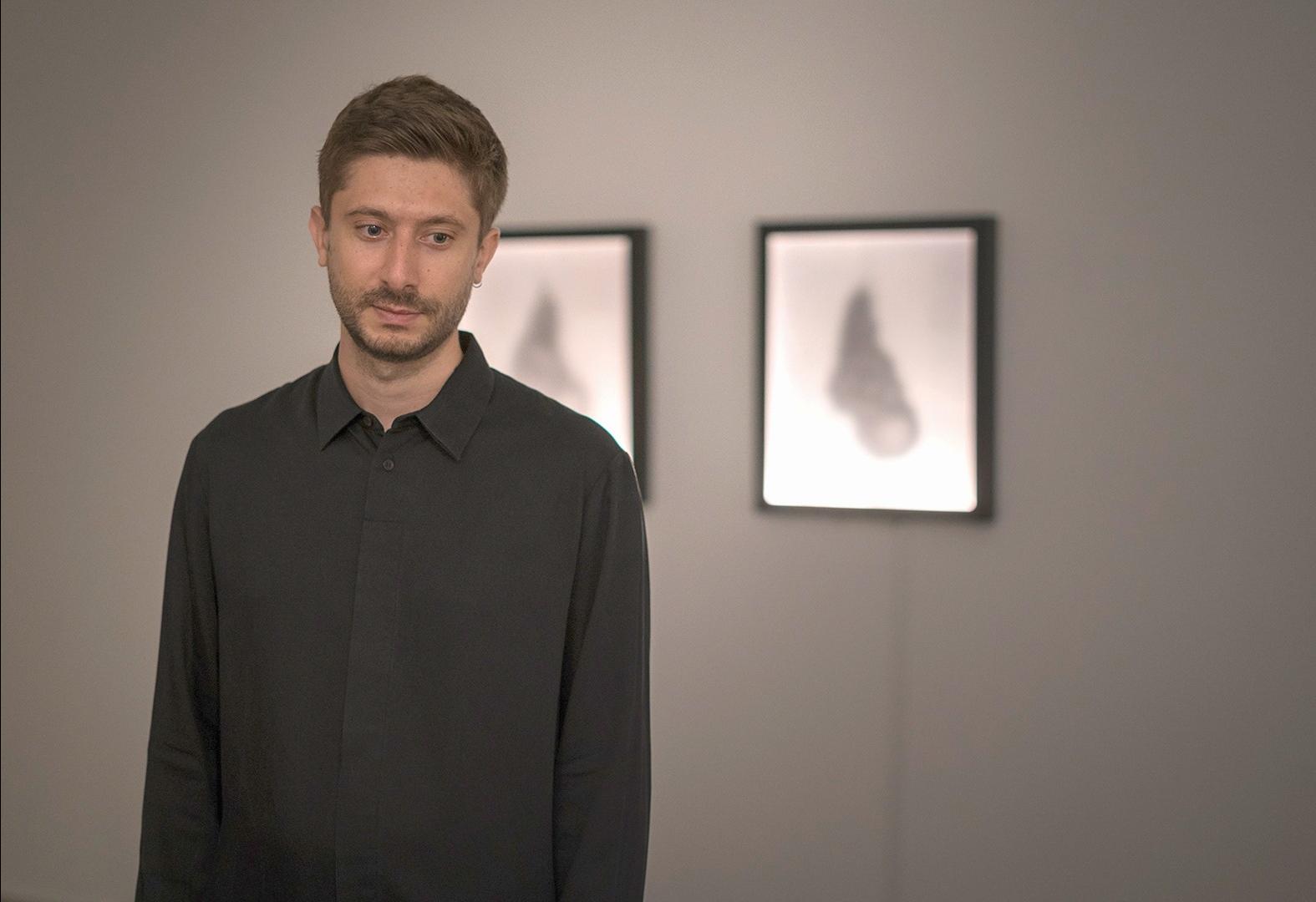 “I believe that the visitors are the actual artists of this particular work,” says Schembri. “By taking a glass of wine and putting it in the next room, they are giving life to this work, which, essentially, is about death and our traces.”

Speaking about how the “visitor-artists” related to this work, the artist says that, while aspects such as ‘anxiety’, ‘vulnerability’ and ‘danger’ came to the fore through the installation, many times, most visitor-artists saw the work as having a light-hearted nature – “until they read the caption,” he quips.

Much like our incomplete perception of a masked person’s face, we may likewise be perplexed by the more liminal stages of life at the opposite ends of a person’s existence. While Schembri’s installation seems to point us more towards the possibility of death through the event of contagion, Scerri’s works provoke us more to consider the ambiguity of life.

That said, much like the duality of ‘between’, both life and death reside in this space simultaneously.

“Materja is a body of sculptural work that metaphorically resides in the constricted space between the mask and the face, and reflects on the in-between state through intentional material ambiguity,” writes Briffa.

“The artist hides the metal sculptures behind fabric and challenges us to consciously experience the form from its evanescent silhouette, cutting us off from any visual truth and denying any likelihood of activating our amodal faculties.”

Materja seeks to question our understanding of life, consciousness and the beliefs surrounding these, with some of the works seeming to consider the liminal, somewhat contested realm of the in utero – an in-between state of life which feels both connected and severed, somewhere on the threshold of existence.

“The work itself addresses the states before and after physical life,” says Scerri.

“The concept of liminality is also apparent in the work; however, I chose to keep it as open to interpretation as possible. These are concepts that are commonly addressed in philosophy as well as spirituality and religion. The decision not to bias viewers was intended to induce reflection.” 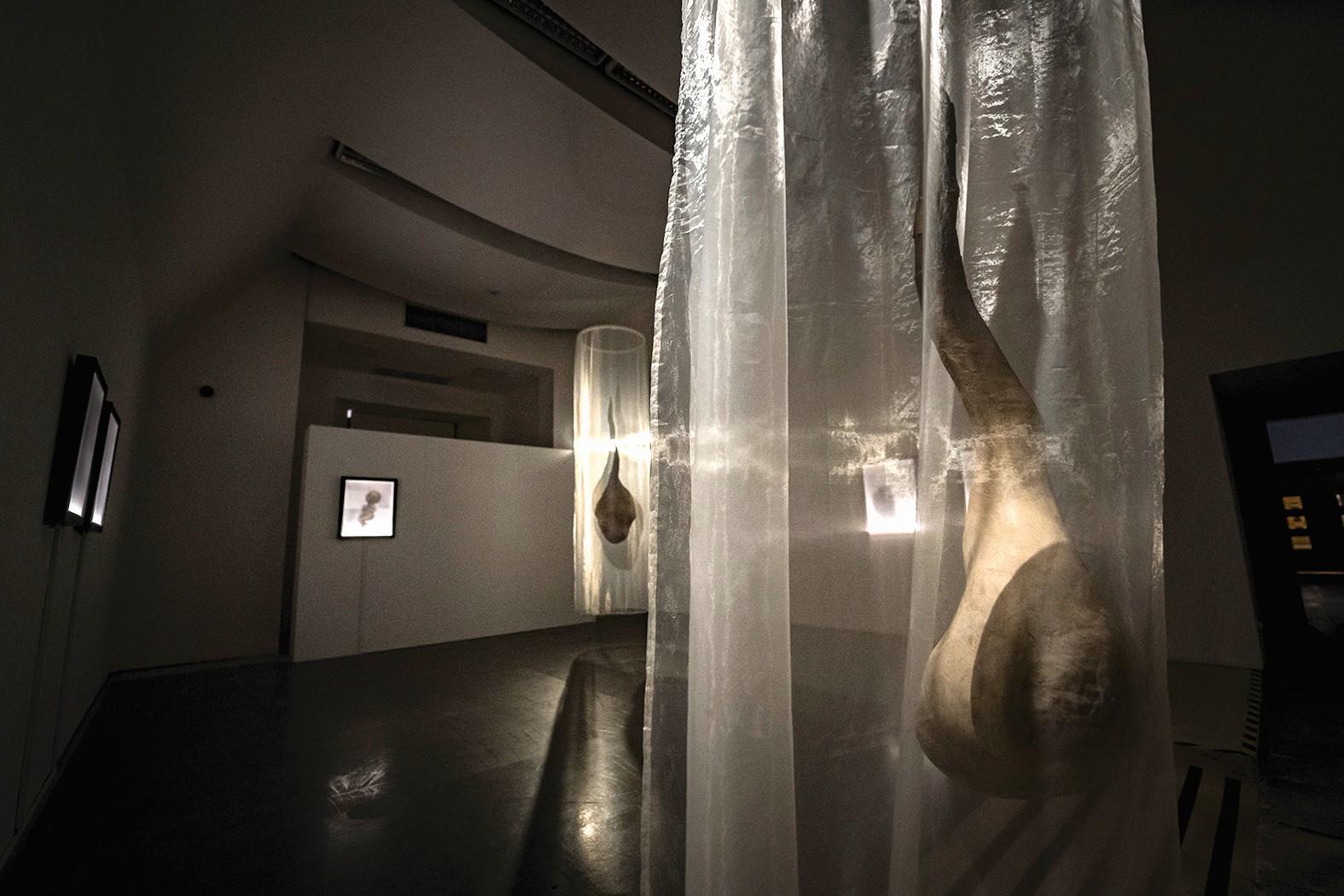 'Materja', by Thomas Scerri, seeks to question our understanding of life, consciousness and the beliefs surrounding these.

This concern with bias led to Scerri choosing to ‘hide’ the installation description rather than putting it in a prominent place so that the viewer sees the work first without being preconditioned.

“This choice obviously did have its adverse effects as some did not connect with the work and lost interest,” said the artist.

Commenting on the in-utero stage depicted in his works, Scerri says this signifies birth but also death.

“The final forms were a result of a long process of drawing, abstracting and redrawing. The embryo form, for example, was one starting point which was then abstracted, changed and redrawn.

“Another starting point was the insect pupa (which signifies a state of transition) and also shrouded figures (also signifying transition and obviously death). By overlapping birth and death, the line between the two opposites is also blurred. This process of drawing, abstracting and redrawing adds another layer to the whole concept,” he says.

Briffa notes that Scerri uses a deliberately unsettling process, positioning the viewer in a state of anxiety, which is itself an in-between phenomenon.

“The ‘not knowing’ factor is a cause for anxiety. This has been very apparent during the COVID-19 pandemic. The afterlife and what comes next is unknown, so the concept itself already addresses anxiety indirectly. This has also been deli­be­rately added through the work.

“The forms are abstract and semi-abstract, thus providing ambiguity. On top of this, the work is concealed, thus enhancing this ambiguity and therefore increasing this anxiety or fear of the unknown. This is also felt in the way the work is displayed – the sculptures hanging from the ceiling, the overall lighting (or lack of it) and overall atmosphere. Through feedback from the audience, this has been achieved since some viewers had described the work as uncanny or unsettling,” says Scerri.

“This world, the realm of necessity, oﬀers us absolutely nothing except means,” writes Weil. The exhibition In Between plays along the threshold of life and death, and draws attention to the necessity of mediation. We come to see, along the way, that there cannot be a ‘between’ without there also being a ‘with’.