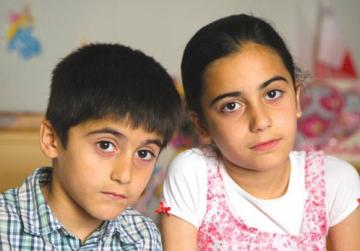 Stera, 9, and her six-year-old brother, Mohammed, were born in Malta and have been raised here, yet they have not been given Maltese citizenship. Photos: Darrin Zammit Lupi

The only thing that sets apart Stera, 9, and her six-year-old brother, Mohammed, from their Maltese friends at the Gżira primary school is the fact that their parents come from Syria. They were born and raised here and speak Maltese better than most, with a natural native accent.

Like most boys his age, Mohammed likes football, Stera prefers basketball. They achieve good grades, and seem happy with their schooling and life in general here.

You could say, they are ‘normal’ children, if only for the fact that on paper, they don’t really exist. They were born stateless in Malta. In other words, they are citizens of no country. I meet them and their family at their flat in Gżira. They’re camera shy and they don’t quite seem to understand why we are there, taking their photos and comments from their parents.

Their family life is also typical. Their mother, Nessrin, has dedicated herself to the young family, while their father, Quis, 41, goes out to work.

He works in construction because it pays better than other jobs, and although he would like to do something less physically-demanding, he doesn’t really complain.

What really worries him is the future of his family.

“You cannot imagine what a big problem it is to be in our situation. This affects everything in our lives, and when we go asking for help, everyone keeps saying there is nothing they can do.”

He shares his children’s state of limbo. In fact, his situation is the root cause of it. Quis is a Syrian Kurd, one of many hundreds of thousands stripped of citizenship by the regime during the 1960s and 1970s.

This affects everything in our lives, and when we go asking for help, everyone keeps saying there is nothing they can do

His wife Nessrin is also Kurdish but is a regular citizen, however, under Syrian law she cannot confer her citizenship to her spouse or her children born abroad.

The only basic recognition that Quis and his children get is through the international protection he was granted in Malta, on the grounds of the well-documented discrimination faced by Syria-born Kurds.

The Kurds are a non-Arab ethnic group associated with what is known as Kurdistan, a vast area in west Asia that straddles parts of Iraq, Iran, Syria and Turkey. There is no state that belongs to the Kurds, and in most of the countries they live in, they have very little status or are openly discriminated against.

In Syria, most Kurds were rendered stateless through a 1962 census, in which those who were ascribed this ethnicity were simply stripped of their Syrian citizenship.

“I don’t remember this personally, but from this point on, we were basically given a piece of paper identifying us but which said specifically that it could not be used for travel,” Quis recounts. Overnight, a whole population of Kurds became legally invisible.

Faced with unrest in 2011, the Bashar al-Assad regime had granted citizenship to some Kurds but Quis echoes the concerns raised by international agencies, pointing out that the system was totally arbitrary and dependent on the candidates’ perceived loyalty to the ruling Ba’ath party.

“On top of that, I don’t really know if I could have travelled back to Syria to be eligible for citizenship. I don’t know if I can travel on the limited papers I have or if they will grant me a visa, because the reality is that I need a visa to travel back to where I was born and raised. That is the problem with my situation, everything is uncertain,” he says.

And the discrimination does not stop there. “We were denied basic benefits even though we paid taxes, and education for us stops at secondary school. You have a family, a house, a history in a country but no rights; it’s no life.”

On top of the discrimination, Kurds often face violent reprisals, and though he does not speak about it explicitly, Quis suggests he too was at the receiving end of such persecution, which is why he resolved to flee the country. He travelled through Egypt and Libya, eventually taking a boat that landed him in Malta in September 2002. Nessrin joined him two years later and travelled to Malta regularly with her passport.

He spent four months in detention at the centre that used to be manned by the police in Floriana and was then released, eventually being granted protection.

He has now been in the country for more than 10 years, but whenever he applies for citizenship, he finds the door shut. And, as he puts it, there is nothing to suggest that “things will ever change”.

Their status means they are stuck here, unable to move on either.

“I like Malta, I like the people and I like the life this country offers. But in some respects, for me, it’s like it was in Syria. My family and I don’t have access to many benefits, like children’s allowance, welfare in case something happens to me, or, even, something like a pension, for the future,” Quis points out.

“We are second class and we are not free to seek a future elsewhere, in a country where they can offer it to us. I understand Malta’s situation, I really do, but I cannot bear this for my family.”

The plight of stateless people is not singular to Malta. The UN Refugee agency (UNHCR) estimates that there are over 400,0000 people in this situation in the European Union alone. However, Malta lags behind significantly in the area.

There are two UN conventions that deal with statelessness, one from 1954 and the other from 1961. They aim to prevent people being rendered stateless in the first place but also provide a legal framework guiding countries that host people without citizenship on how to protect them.

Malta, along with Estonia, Poland and Cyprus within the EU, is not party to either convention despite a 2012 pledge by member states to all be signed up. And although in 2003 the government signed a 1997 Council of Europe convention dealing with the problem, Parliament is yet to ratify the legislation.

Even rarer are cases of children, like Stera and Mohammed, who were born stateless here. A similar case is that of a Somali-born woman, who gave birth to a girl on an unregistered vessel in international waters , before being brought to Malta. However, both mother and child have now moved on after being chosen as part of a relocation programme to France.

Recently it was announced that legal amendments are being considered to allow such children to be registered in Malta.

UNHCR is now planning to publish its research as part of an upcoming 10-year global campaign to eradicate statelessness.

The story of Quis, Stera and Mohammed will feature in that research. The father hopes it will lead to the change his family needs to be settled.